As focus turns this week to the Build Back Better Act’s (BBBA) “Byrd Bath”—the Senate parliamentarian’s review of the BBBA’s compliance with reconciliation rules—one provision that has received little attention is an attempt to penalize states that haven’t expanded Medicaid under the Affordable Care Act (ACA). Under the House-passed BBBA, Democrats seek to blackmail states that haven’t expanded Medicaid by enacting significant funding cuts to hospitals in those states starting in 2023.

By law, the federal government provides disproportionate share hospital (DSH) payments to states to distribute to their hospital systems to offset uncompensated care for Medicaid patients and the uninsured. This raises a couple of questions. First, why do hospitals need the federal government to reimburse them for uncompensated costs associated with treating Medicaid beneficiaries if Medicaid rates are reasonable? Setting that aside, in this brave new world where the ACA has guaranteed that almost everyone has access to insurance coverage, shouldn’t uncompensated care be a thing of the past? In theory it should, and in fact the authors of the ACA did seek to curtail DSH payments on those grounds, but those payment reductions have been pushed off time and again and aren’t currently slated to kick in until 2024. Needless to say, the entire DSH payment system is in need of an overhaul.

The ACA mandated Medicaid expansion, making continuation of all federal Medicaid dollars contingent oncompliance. But the Supreme Court famously called that “a gun to the head” and ruled that Medicaid expansion had to be voluntary. Ever since, supporters of Medicaid expansion have struggled to entice, prod, or force reluctantstates to go along, but to date 12 states still have not expanded (though Wisconsin is a slightly more complex case). One major priority for Democrats, particularly Democrats from non-expansion states, has been figuring out how to extend Medicaid coverage to the 2.2 million people residing in those states who aren’t eligible for ACA premium tax credits (PTCs), and aren’t eligible for Medicaid. An earlier draft of the BBBA aimed to establish a parallel Medicaid program, just for the coverage gap population, and provided temporary eligibility for PTCs for ACA coverage until the program was up and running. The House-passed BBBA, however, in a cost-cutting move, dropped the parallel Medicaid program and instead offers the coverage gap population four years of free individual market coverage under the ACA at a cost of $211 billion according to American Action Forum projections.

There’s a catch, though: The BBBA would also cut DSH payments to hospitals in non-expansion states by 12.5 percent starting in fiscal year 2023. The BBBA authors’ argument is hardly new. They maintain that extending free individual market insurance to the coverage gap population will reduce uncompensated care in these states, and so they won’t need as much DSH funding. Of course, expansion states already have lower rates of uncompensated care than non-expansion states, yet their DSH payments remain curiously untouched. Additionally, the DSH cuts for non-expansion states are permanent—unless they expand—even though the expanded PTC eligibility lapses after just four years. If states want to avoid these funding cuts—which the American Hospital Association estimates amounts to roughly $8 billion over 10 years—they do have one option: They can always cave and expand their Medicaid programs.

Holding hospitals hostage to force states to make your preferred policy choice is a nifty trick, but it does raise the question of whether this latest attempt to force states to expand Medicaid might run afoul of the Supreme Court’s “gun to the head” objection. Regardless, even many supporters of the BBBA have objected to this punitive policy, which Senate leaders would do well to reject.

The United States Agency for International Development recently announced an additional $400 million investment in global COVID-19 vaccine distribution, including creation of the Initiative for Global Vaccine Access to prioritize support in sub-Saharan African countries. As shown in the chart below, only 11 percent of the African population is partially or fully vaccinated as of December 1 of this year, lagging significantly behind that of all other continents. Despite recent increases in vaccine deliveries to low- and middle-income countries in need, unreliable infrastructure and limited health care workforces in many countries have hindered vaccinations and, in some cases, resulted in batches of vaccines expiring and becoming unusable. It appears many countries will not meet the World Health Organization’s goal to vaccinate 40 percent of the population of every country by the end of 2021— in Africa, only 6 out of 54 countries had met the goal as of December 1, 2021. 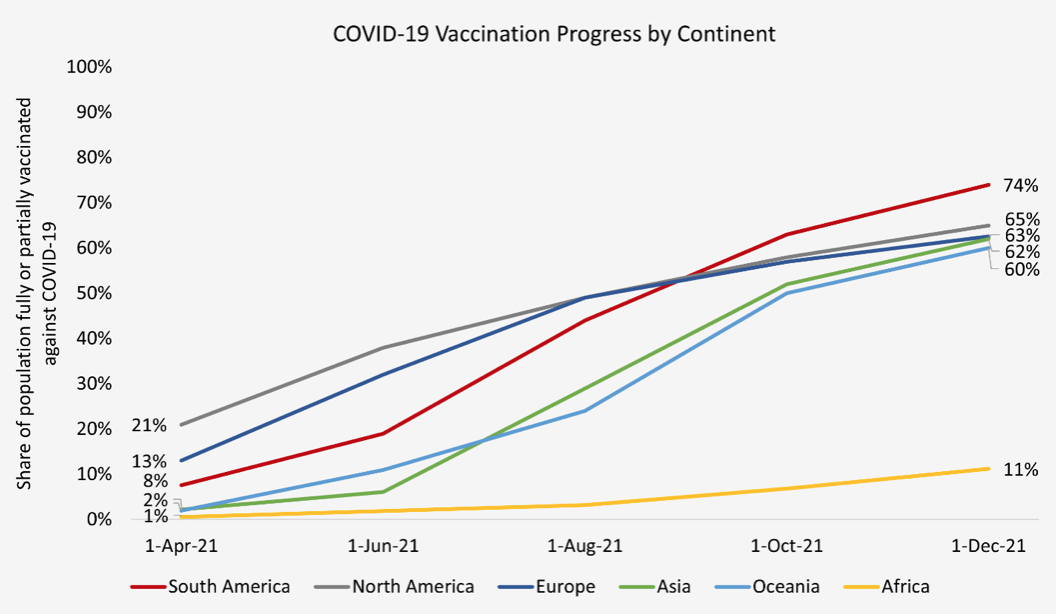 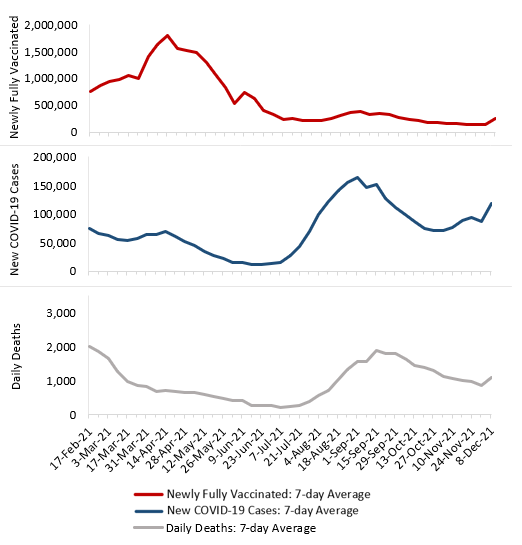