As the nation marks the 50th Anniversary of the creation of Medicare and Medicaid, it is important to both look back at how the programs have evolved, as well as forward at what’s to come. But be careful—the trajectory may alarm you. Between 2010 and 2023, total expenditures on Medicare and Medicaid will more than double to nearly $2 trillion annually, while enrollment during that same period is only expected to increase by 45 percent. Spending on Medicare did not surpass $500 billion until 2009, 44 years after the program began; but it will only take 13 years beyond that to increase by the same amount. In the 10 years between 2014 and 2023, average annual enrollment growth in both Medicare and Medicaid will be approximately 3 percent, while average annual growth in expenditures will be more than double the rate of enrollment for both programs—6.2 percent for Medicaid  and 7 percent for Medicare. 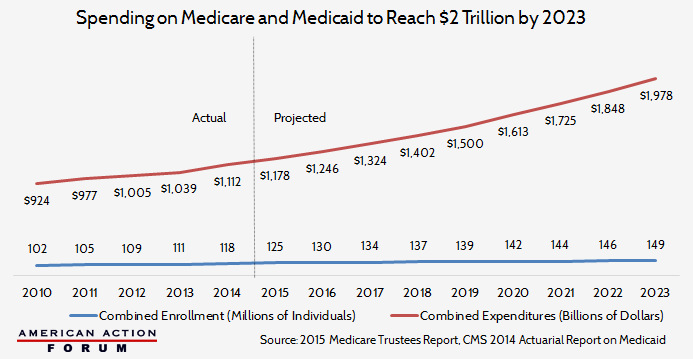 It is increasingly clear that Democrats will have to pare back the $3.5 trillion topline reconciliation figure to clear the Senate. It’s less clear how…