The Staying Power of Employer-Sponsored Insurance

The Congressional Budget Office (CBO) estimates that this year alone the federal government will spend $920 billion to subsidize health insurance coverage for roughly 240 million Americans under the age of 65. The bulk of that spending, $433 billion, will be spent on Medicaid, but the taxpayer will also spend $303 billion to subsidize employer-sponsored insurance (ESI). Economists—and many conservative policy wonks—have long been critical of the tax exclusion for ESI, but just last week the Republican members of the House Committee on Education and Labor sent a letter to Health and Human Services Secretary Xavier Becerra “regarding the critical importance” of ESI. What’s the story?

First, the ivory tower criticism of ESI is not without merit. There is no obvious reason why health insurance coverage should be tied to employment, and plenty of reasons why it shouldn’t. The entire COBRA system exists in part to address some of the problems that result from ESI, and one of the early arguments for the Affordable Care Act (ACA) was that it would help divorce insurance from employment. ESI is uniquely American and is largely a result of President Roosevelt’s decision in 1942 to freeze wages during World War II. Business, competing for increasingly scarce labor supply, began to offer other benefits such as health insurance. Concurrent with these developments, contributions to health insurance premiums were exempted from federal taxes. Eventually the wage freeze was lifted, but the tax code continued to incentivize compensation in the form of health insurance, and workers increasingly came to expect it. Labor unions in particular embraced ESI, negotiating especially generous, tax-free health benefits in lieu of higher, but taxable, wages.

Today, for all the time we spend talking about the ACA, CBO projects only about $60 billion in net spending on ACA-related insurance subsidies in 2021. In effect, ESI is the federal entitlement program we just don’t talk about. None of that is to say, however, that ESI doesn’t have its benefits. First and foremost, whatever economists think about it, ESI is popular. According to a March 2021 survey by America’s Health Insurance Plans, 67 percent of ESI enrollees are satisfied with their coverage, 76 percent are confident they’ll be protected in a medical emergency, 71 percent say their coverage is easy to use and understand, while 75 percent and 78 percent respectively say that it was a factor in their decision to accept their current job or to stay in their current job. Citing the Department of Labor, the Kaiser Family Foundation, and the Centers for Medicare and Medicaid Services, Ed & Labor Republicans argued that ESI plans have an average actuarial value of 85 percent, making them more generous than Silver and Gold Exchange plans, and that they have notably lower deductibles and lower out-of-pocket costs.

The popularity of ESI means that it will not be easily ended, and so it is worth examining in some detail to understand not only its flaws but also its benefits and the tradeoffs that ensue. The federal government certainly spends less through the exclusion to insure an individual than through Medicaid, the ACA, or Medicare, but the total average premium of ESI insurance is close to or even higher than federal spending on Medicare per person, so what’s efficient for the federal government may not be efficient for the broader economy. The value of ESI is also less well defined; more data are needed on outcomes for those in ESI versus other types of coverage.

The reality is that despite decades of health reform efforts, ESI remains the dominant source of health insurance for Americans, with roughly 156 million covered in 2021. Economists and policymakers may think they have better answers, but ESI has staying power, and it would behoove us to better understand the benefits of this system that make it so popular with Americans.

The United States is predicted to face a shortage of between 37,800 to 124,000 physicians in the coming years, with shortages among both primary and specialty physicians. This shortage is likely to hit rural areas the hardest, as nearly a quarter of rural doctors are forecasted to retire by 2030. As the graph below shows, physician-to-patient ratios are lower in rural than urban areas for primary care and specialty physicians. One factor contributing to this trend is that physicians are more likely to practice where they are trained, and most medical schools and residency programs are located in major urban areas. Further, rural physicians’ salaries are typically lower, and with the average medical student owing $215,900 in student loan debt, doctors may prefer settling in areas where debts could be repaid at quicker rates. At the same time, Rural America’s population is aging and will require a greater amount of medical care. With evidence showing that physicians are more likely to practice in rural areas when trained in rural practices, medical institutions could play a key role in addressing this shortfall by promoting programs that offer rural-based medical training. 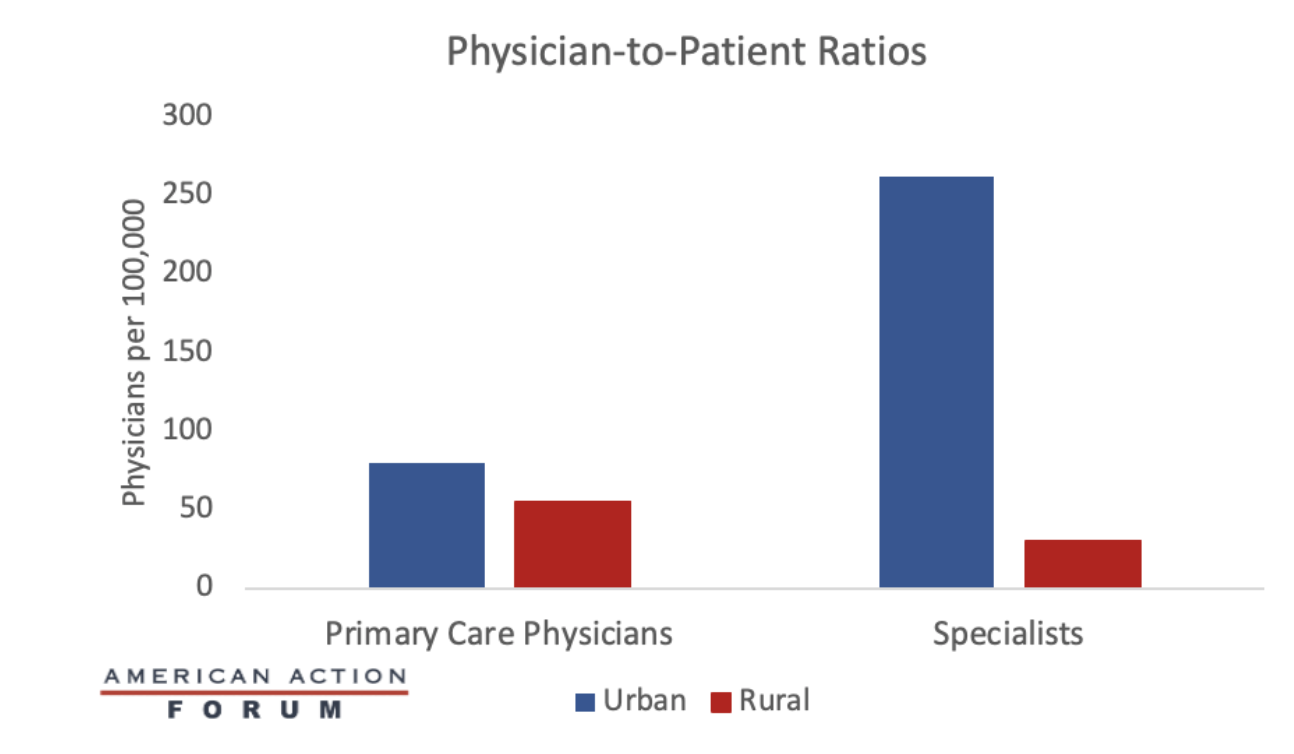