Yesterday, the president told an audience that due to poorly written regulations “…compliance costs end up skyrocketing. You have regulations that squash innovation.” Amazingly, this statement comes after a year of the administration issuing over $150 billion in costs for proposed and final rules. AAF has some solutions for the next Congress on how they can address regulatory reform and six regulations that can be reviewed under the Congressional Review Act.

The House has passed a tax extenders bill that will allow a number of tax breaks to be claimed for 2014. According to MarketWatch, the Senate may simply pass the bill without change. In its current form, the bill will force Congress to take up the issue again in 2015.

Obamacare v.1 featured sharp increases in the cost of health insurance for those forced to purchase products on its exchanges —  a predictable result of heavy benefit mandates, forcing the “young invincibles” to pay for the health care costs of older, sicker, and more expensive enrollees and the overall impact of its tax- and regulation-heavy approach. What happened this year?

AAF’s Conor Ryan has crunched the data and three important lessons fall out:

Lesson 1: The underlying growth in premiums is about 5.8 percent. The key is to make an apples-to-apples comparison between year 1 and year 2. To do so, focus on the so-called “benchmark plans” — the second-lowest cost Silver plan. In addition, look only at those benchmark plans that are the same in 2015 as they were in 2014. The benchmark plans in 2014 that are still offered in 2015 have increased by an average 5.8 percent—roughly $480 per year for a family of four—which is the best estimate of underlying premium growth.

Lesson 2: You will hear a million different numbers for premium growth. Remember 5.8 percent and ignore the rest. Premium increases are all over the map for a variety of factors. For example, simply looking at the benchmark plans, the increase is an average of 1.6 percent because many of those plans have changed. Or, as the chart below (reproduced from the study) indicates, premium changes in the cheapest bronze plans for the 501 rating areas are all over the map. 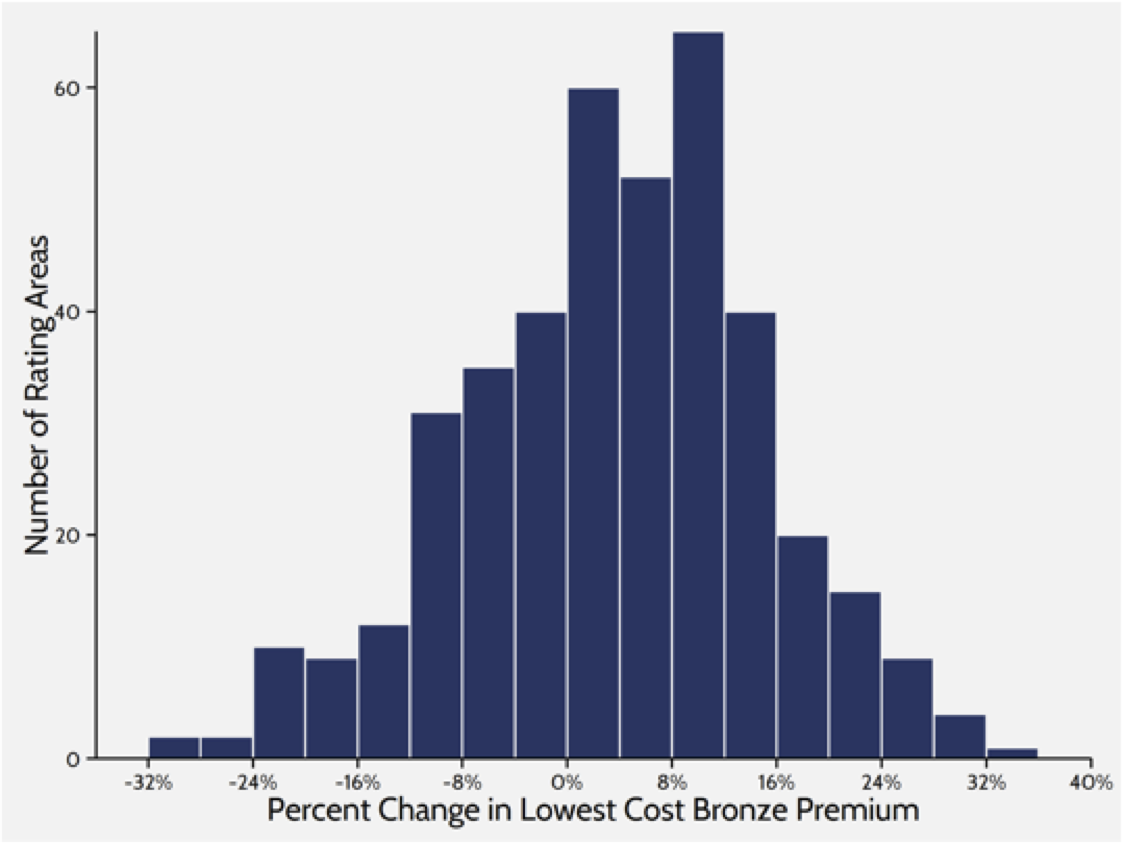 Lesson 3: Competition works. To the extent that there is a noticeable pattern, it is that premiums rose least in those areas where there were two or more entrants into the insurance competition. In areas where the number of issuing firms remained the same or increased by one, the lowest cost Bronze plan increased by 5.2 percent and the benchmark plan has increased by 3.1 percent. By comparison, where there were two or more entrants, the comparable numbers are 2.8 percent and 0.1 percent.

In the end, Obamacare insurance is more expensive than its predecessor. That additional cost in 2015, however, is trickier to identify. Careful work suggests that costs are still rising, but that competition mitigates the sticker shock for purchasers.

How the New Congress Can Address Regulation by Sam Batkins, AAF Director of Regulatory Policy

Eakinomics: Budget Update The Wall Street Journal said it all: “The U.S. budget deficit grew to a record $1.7 trillion in the first half of the…

Eakinomics: Beware Feds Bearing Gifts One big headline in the American Rescue Plan (ARP) is that it provides $362.05 billion in fiscal assistance…