‘Tis the Friday before Memorial Day, a day traditionally devoted to thinking about the link between research and development (R&D) costs and drug prices. As it turns out, I just recently testified about drug prices, and the testimony of one of my fellow panelists argued that R&D costs did not explain the high prices of drugs, noting: “The money U.S.‐based drug companies make by charging Americans high prices is 176% greater than what is needed to fund their global R&D.” I’m not saying the hearing wasn’t compelling, but I spent the remainder of the time wondering what should be the relationship between R&D and revenues.

When I got back to the office, I said to myself, “Doug, you need to figure this out.” One of the key features of drug development is that the probability of success (call it p) is very low, as about 8 percent of those drugs that enter trials actually get approval. Let’s round that to a 10 percent chance of success. In addition, it takes a long time (let’s call it T) to develop a drug (let’s assume 10 years), after which — and this gets all the attention — there will be patent protection that lasts years (let’s call those years L). We’ll use 20 years as a ballpark. So, the basic situation is that a firm has to shell out R&D costs every year (call that D) for 10 years on 10 different drugs so that in the 11th year one of them will pay off.

For this approach to make sense, the expected (discounted) revenues have to equal or exceed the (discounted) R&D costs. With that as the organizing notion, I then did this— 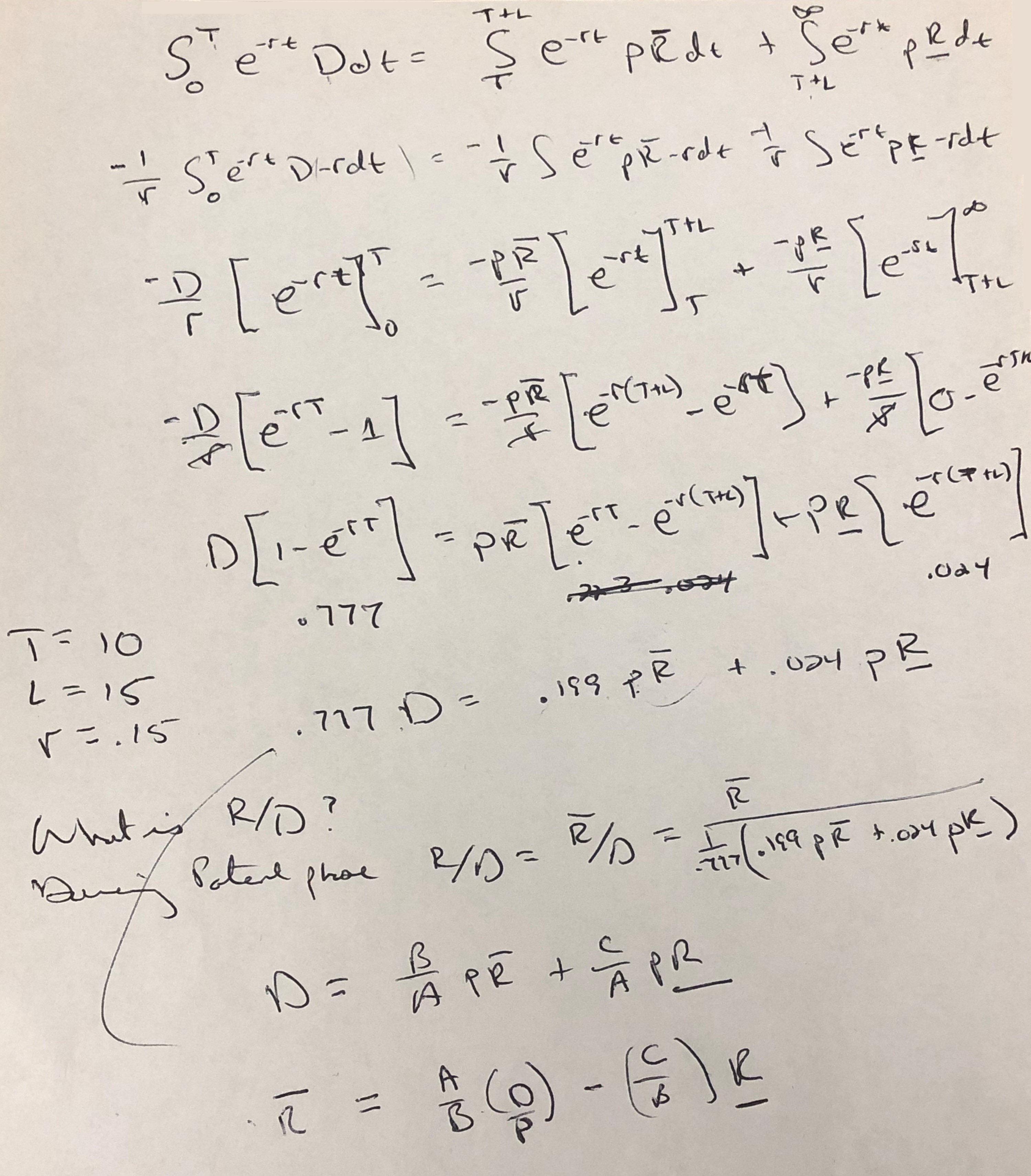 —which tells us that if the R&D costs (D) is $5,000 per dose, then the break-even launch price of the drug is $98,000 per dose. (This calculation assumes that the firm has to earn a return of 10 percent.) Most important from the point of view of the basic question, we observe a firm that has $98,000 in revenue while forking out $50,000 in annual R&D costs for the next 10 drugs (one of which will pay off) — a ratio of 196 percent. That figure is in the ballpark of the 176 percent that was held out as too high.

Now one page of scribbling leaves out a lot: global versus U.S. revenues, knock-off drugs with a higher chance of success, uncertainty over the entry of competitors, sensitivity to rates of return, and other sources of costs. But it captures some key realities that dominate the economics: Drug development is mostly failure with a small probability of success, the expenses of failure go on for a decade before any revenue shows up, and any revenue from off-patent sales are so far in the future (30 years) that they simply don’t matter compared to the on-patent price.

The United States' removal of steel and aluminum tariffs on Canada and Mexico reduce the additional consumer costs by $2.7 billion per year.

Eakinomics: The Fair Access to Banking Rule Consistent with the Trump Administration’s general rush of midnight regulation, the Acting Comptroller…

Eakinomics: Some “Stimulus” Math The Wall Street Journal and Washington Post are reporting that the incoming Biden Administration has begun…

Eakinomics: Trump, Free Speech, and the Tech Sector It has been nearly a week since the insurrection at the United States Capitol. Each day we learn…