Federal Aid and the Farm Sector

A bit over a year ago, Eakinomics checked in on the financial status of the farm sector. The trade/tariff war with China had added to the woes of a sector that had already been slumping since 2012. Federal direct payments (which omit federal support of loans and other financial arrangements) had reached 11 percent of farm net income in 2017, but the Trump Administration bailout of farmers in the aftermath of the trade war promised to essentially double this amount.

As witnessed by recent New York Times coverage, the issue of large federal subsidies to the farm sector, especially on the eve of the election, continues to command attention. The table updates the farm sector financial picture using data from the United States Department of Agriculture. As before, the most important feature is that farm income in 2019 appears to have rebounded from the recent low in 2016. Of the $7.5 billion increase in net income in 2019, however, fully $5.6 billion was due to increased federal aid. Otherwise, receipts declined modestly. 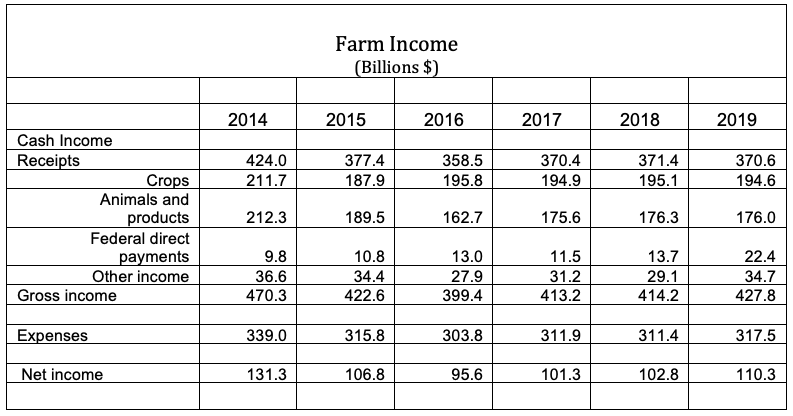 The data also reveal that crops continue to generate 52.5 percent of farm revenue. The mix of crop revenue versus animals, poultry and eggs, dairy products, and miscellaneous other sales remains relatively stable. But the biggest recent increase has been direct payments from the federal government, which are up over 72 percent from 2016. These now constitute over 20 percent of net income.

The trade war and now pandemic have taken a real toll on an already-weakened farm economy. As a result, as the election approaches, the sector is more reliant on federal aid than in the recent past.

Since the passage of the Staggers Act 40 years ago today, freight rail rates have decreased more than 40 percent while productivity has more than doubled.

Eakinomics: The Fair Access to Banking Rule Consistent with the Trump Administration’s general rush of midnight regulation, the Acting Comptroller…

Eakinomics: Some “Stimulus” Math The Wall Street Journal and Washington Post are reporting that the incoming Biden Administration has begun…

Eakinomics: Trump, Free Speech, and the Tech Sector It has been nearly a week since the insurrection at the United States Capitol. Each day we learn…