Discussions between the White House and the Congress continued last night as both sides tried to work towards a deal to reopen the government and avoid a national default next week.  The Wall Street Journal reports that “At a White House meeting of the president and top House Republicans, Speaker John Boehner (R., Ohio) offered the proposal to extend U.S. borrowing authority in exchange for an agreement from Mr. Obama to negotiate on a broad range of budget issues.”

The Journal continues: “The meeting ended inconclusively. But after weeks of stalemate and sniping, as well as a partial government shutdown that entered its 10th day Thursday, the inauguration of talks was a breakthrough that signaled a new openness on both sides.”

The New York Times details some possible terms of the negotiations writing “People familiar with the meeting said that Mr. Obama pressed Republicans to reopen the government, and that Republicans raised the possibility that financing could be restored by early next week if terms for broad budget negotiations could be reached.” Early reports had indicated that the meeting ended negatively but as the Times continues, “An initial report that Mr. Obama had rejected the Republicans’ offer was too definitive and came before Republican leaders or the White House had made it clear to reporters that the negotiations would continue.”

Not all federal spending is created equal.  “Discretionary” spending must be decided (“appropriated”) by Congress each year, which settles on the amounts for each agency and activity that ultimately turns into actual spending (“outlays”).  In contrast, “mandatory” spending is automatically appropriated for eligible individuals without Congressional action and then turns into spending.  Mandatory spending is the home of the familiar entitlements: Social Security, Medicare, Medicaid, and ObamaCare, as well as others like unemployment insurance and farm programs.

As the charts below vividly document, mandatory spending has been on a steady march to take over the budget, rising from a minority (41 percent) of spending 40 years ago to nearly two-thirds (62 percent) now.  Fueled by an aging population, health care costs, and the new entitlement, the future promises to be even more of the same.

These dynamics explain the central role of entitlement reform in the debt ceiling deal.  The current “sequester” approach is focused nearly entirely on discretionary spending, which means it is a powerful weapon aimed at the wrong target.  Moreover, the discretionary target houses national defense, infrastructure, basic research, and other core functions of government.  Logically it makes sense to control the large and rapidly growing part of the budget to stem the red ink.  Policywise, it makes sense to preserve core functions of government.

Voila!  The debt deal should be (a) entitlement reforms, (b) relaxation of the sequester, and (c) an increase in the debt ceiling. The only problem is that while liberals/progressives want (b) and (c), they are stonewalling (a).  Stay tuned to see if their political aspirations fall into alignment with budget reality. 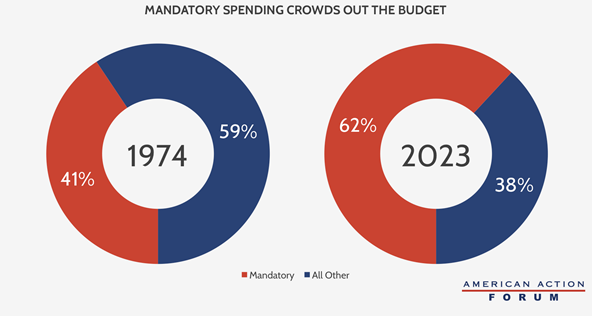 The Fed and Inflation Expectations

Since the Federal Reserve got serious about controlling inflation at the start of 2022, a key part of the battle has been to convince households, businesses…

It is done. The Senate has passed the Inflation Reduction Act (IRA) using reconciliation procedures. Outside of the political imperative to “get something…

The Fed and Inflation