President Trump’s August 8 executive order required agencies to review what  might be possible to forestall further evictions in the midst of the COVID-19 recession. In response, the Centers for Disease Control and Prevention (CDC) has released a proposed agency order that would ban some evictions through December 31, with criminal penalties for landlords violating the ban. AAF’s Thomas Wade has a timely review of the order.

My question is: How many potential evictions are there? During the course of the pandemic to date, I have seen estimates that nearly capture the range from zero to 43 million, which is roughly the number of rental households.

I wanted to try to answer this question, and as a starting point I took a look at the Rent Payment Tracker by the National Multifamily Housing Council. The graph below – created from their data – shows that in April 2019, 97.7 percent of households had made their rental payments. One year later this rate was down to 94.6 percent; it has since rebounded to 95.7 percent in July. Using this rate as an indicator of potential eviction for non-payment, the current impact is 2.0 to 2.9 percent – from 860 thousand to 1.2 million households. 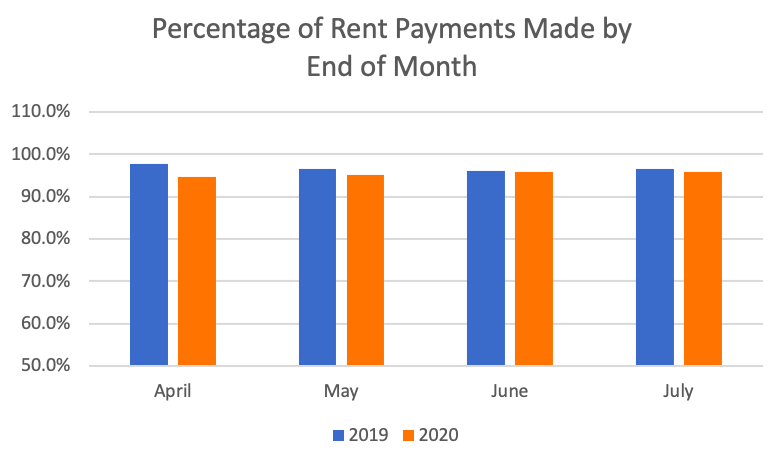 Unfortunately, this is a backward-looking indicator. It would be preferable to have some notion of households who will face an eviction threat over the next six months or more. To get a sense of that, I turned to the Census Bureau’s Household Pulse Survey. It also covers July, specifically the week of July 16 to July 21, but has both a question that is a check on the backward-looking data (last month’s payment status) and a forward-looking question (confidence in the respondent’s ability to make next month’s payment).

The differences are dramatic. Overall, 19.7 percent of respondents indicate that they did not make last month’s rent payment. This is nearly 5 times more than indicated in the Rent Payment Tracker and would imply that nearly 8.5 million households are already behind on their rental payments. Among households that have experienced a loss of employment income, 27 percent did not make last month’s payment. (The Pulse survey has a great deal of detailed data on the characteristics of the households.)

Looking forward, one would expect the number to rise as durations of unemployment lengthen. There is some evidence of this tendency, as 14.1 percent of households have “no confidence” that they will be able to make next month’s payment and 19.9 percent have only slight confidence of their ability to pay. That totals to 34 percent of all households – 14.6 million households.

But, as Wade notes, the problem cannot be fixed by preventing evictions alone. The wide range lends considerable uncertainty around the scale of the financial support necessitated by eviction threats that renters will provide. There clearly appears to be additional duress among renters. But it may be a better strategy to focus on income adequacy overall, as opposed to trying to identify household-specific eviction risks and tailor an appropriate financial response.

Over the period from 2016 to 2019, the homeownership rate in the United States rebounded from 63.5 percent to 64.9 percent, a remarkably sharp rise over a short period.

Imagine if Congress were to devote scarce lame-duck legislative time and energy to the Leech Collector Competition and Preservation Act (LCCPA), permitting…

Wow, Didn’t See That Coming. Not.

I told you so. Well, actually, AAF’s Tori Smith told you so. “The Inflation Reduction Act’s clean vehicle tax credits include rules of origin for…