The Wall Street Journal got my attention with “Homeowner Groups Seek to Stop Investors From Buying Houses to Rent,” which contained numerous assertions like “the rise in home purchases by rental investors has led to a decline in property maintenance and made their neighborhoods less desirable,” and “Investors are also making it more difficult for local families to buy houses.” There is also the terrific assertion that: “They’re coming in, and they’re basically bullying people out with cash offers.” If someone showed up with a pile of cash to meet the asking price or more for my home, “bully” is not exactly the first name that comes to mind.

Now, I confess that I came to this issue with a bit of bias, having listened to Senator Elizabeth Warren decry the evils of private equity investments in Sandcastle Estates and similar investments (the diatribe begins at 1:36). Warren rails against private equity investment with the same frequency that most people breathe. (See my testimony on the topic.) Of course, despite Warren’s best efforts to portray the industry as evil, most investors are not private equity behemoths. 2018 data suggest that 73 percent of single-unit rental properties are owned by individuals, with only 19 percent of the same properties owned by for-profit businesses.

I also noticed comments like “some of the homes in the subdivision owned by investors now look shabbier.” I’ve been a renter for large portions of my life and take offense at the notion my lodgings were somehow a menace to the general welfare. I’ve never understood the idea that homeownership or homeowners are inherently virtuous. The homeownership rate in Switzerland is only 41.6 percent (compared to 65.3 percent in the United States), but I’ve never heard returning tourists refer to the country as a “little shabby.”

Putting all that emotional content aside, how should one think about this issue?

First, this is nothing new and does not represent a fundamental change in the way the housing market works. (All of the figures to follow are taken from this Redfin publication.) Yes, the proportion of purchases by investors reached a new peak of 18.4 percent in the 4th quarter of 2021, but it has been in the 10-15 percent range for a decade. This is mostly more of the same. 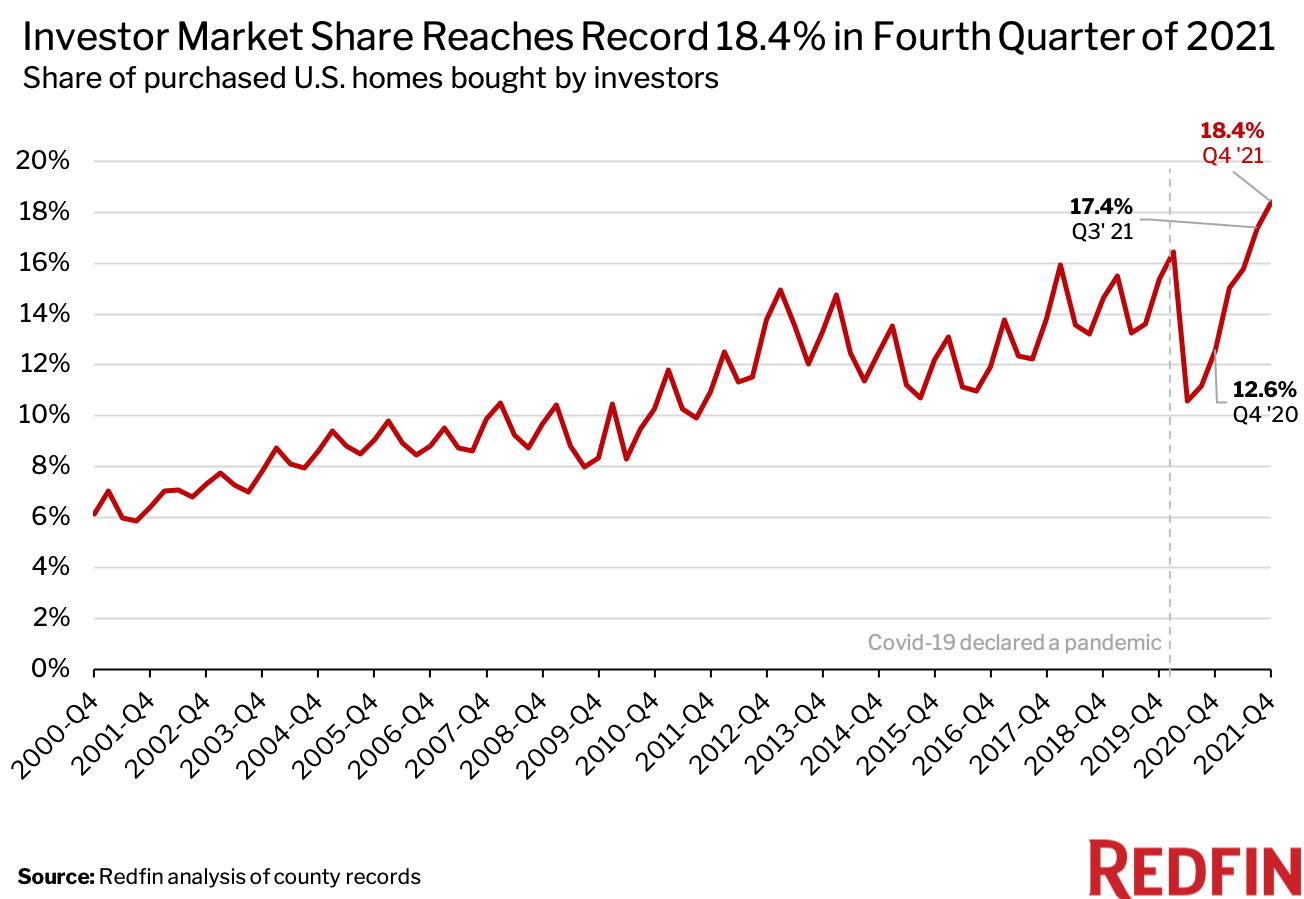 Second, it would seem that the primary concern should be that there is shelter available to fit families’ needs – either to rent or to own. And notice as well that if people think renting is an inferior experience, other things being equal they will pass on renting and buy instead. If the demand for renting is insufficient, investors will have no incentive to buy homes.

Third, the exact character of an “investor” is a little bit slippery. The Redfin methods attempt to screen out all but business and institutional investors, but a mom and pop rental business could be organized as a Limited Liability Corporation (LLC) – which is incredibly easy to do – and be included. As noted above, these data may be a lot more Main Street than Wall Street.

Finally, there is the issue of timing. Right now U.S. housing markets are red hot and the inventory of unoccupied homes for sale is at a record low. To the extent that conversion to a rental property takes time, this pulls some inventory off the market, and the overall (rent plus own) supply will be diminished a tad. Going forward, however, an important channel for the Fed to fight inflation is to raise interest rates. This will cool the demand for owner-occupied housing and people may be grateful for the expanded rental supply.

In the end, the data don’t indicate that the investor vs. owner-occupied ratio is something that justifies federal intervention.

Across all rulemakings this past week, agencies published $20 billion in total net costs and added 24.7 million annual paperwork burden hours.