The Oil and Gasoline Roller Coaster

Global oil and gasoline markets have gone for quite the ride. And the resulting policy ride has been bumpy as well.

Rapid shifts in global demand were paired with slower adjustments in supply, causing prices to swing widely. In the spring of 2020, demand for oil collapsed so rapidly that futures prices briefly turned negative. More recently, the action has been in the other direction, with demand recovering rapidly (although not yet back to 2019 levels) and global supply rising more slowly. The result, as Ewelina Czapla lays out in her most recent piece is global oil prices reaching $80 per barrel territory.

Gasoline supply, demand, and prices have followed suit, in part because crude oil makes up half the cost of gasoline, and because domestic demand and refinery supply have mirrored the global market (see below, reproduced from Czapla). 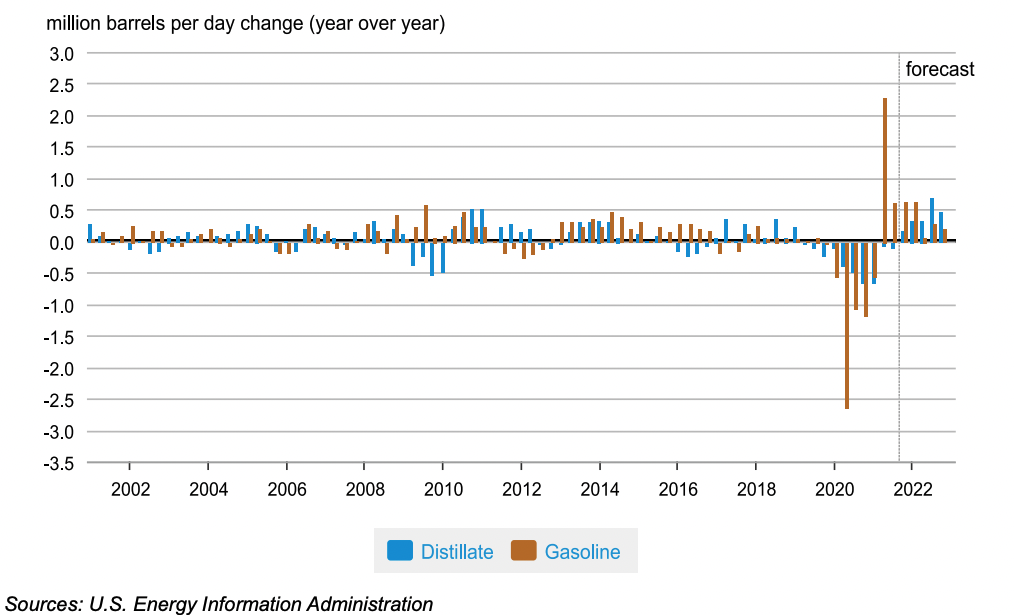 High gasoline prices are a burden for any administration, even an administration that wants to move away from fossil fuels and pretend that the shift will be painless. President Biden has called on OPEC to increase production, which is silly from a climate perspective – it does not matter where the carbon comes out of the ground; only that it goes into the atmosphere – and infuriating for those who felt that North American energy revolution of the past decade had stripped OPEC of its geopolitical power.

The administration has also floated some domestic policy initiatives. But as Czapla notes: “In its attempts to identify how to reduce oil and gasoline prices, the Biden Administration has focused on policies that are either too slow-acting – reversing the moratorium on new oil leases on federal lands – or too small – releasing oil from the Strategic Petroleum Reserve (SPR) – or misguided – banning exports – to be effective.”

In the end, the energy policy incoherence stems from a climate strategy that feature demonizing and restricting the supply of fuel sources – notably, coal, oil, and natural gas – instead of using abatement incentives such as a carbon tax to reduce emissions of greenhouse gases regardless of their source.

Across all rulemakings this past week, agencies published $180.7 million in total net cost savings but added 69,576 annual paperwork burden hours.

In October, private-sector payrolls rebounded from a more modest gain in September, showing broad-based gains across goods and service-producing industries.…

Thomas Wade has posted the latest iteration of the AAF Housing Chartbook, this one containing data through the 3rdquarter of this year. If you are a housing…

No, PFLWBBBAF is not what the dog sounds like at 3 a.m. after she has eaten something hideous on her evening walk (but it’s close). Neither is PFLWBBBAF…

Interpreting the Economics of Mayor Pete

Sometimes it is worth listening to what politicians actually say. It can be illuminating. Consider this television appearance by Transportation Secretary…