The 2021 inflation record featured 7 percent consumer price inflation – the fastest in four decades. Inside the total, the basket composed of food, energy, and shelter rose even faster: 8.2 percent. In most of the coverage of the inflation story, however, the focus is on specific foods (e.g., meat) or gasoline prices. There is often little attention paid to shelter. This is a mistake.

Why? Food, energy, and shelter are over one-half of the typical family budget, but shelter alone is one-third of the budget. During 2021, shelter prices rose 4.1 percent. If this accelerates to 5 percent (more on that below), the Fed cannot meet its 2 percent inflation target unless all other prices rise by one-half of one percent. When you hear administration officials pledging that inflation will get back to the target this year, think about that arithmetic and be skeptical.

The chart (below) gives some insight as to why. The blue line shows price growth on all rentsand the orange line is the rent equivalent for a homeowner (effectively what the market would charge the owner to rent the same unit). These data are from the official Consumer Price Index produced by the Bureau of Labor Statistics. These are a nationally representative series that are relatively slow-moving. Over the past year they have steadily ramped up from 2 percent to 4 percent. And there is continued upward pressure in the pipeline.

The third (grey) line is monthly rental data on new properties from Redfin, a national real estate brokerage. Clearly the upward inflation pressure emanating specifically from new listings for rental properties is substantial – reaching 14 percent annually in December 2021, a full ten percent higher than at the same time the previous year. As this pressure shows up throughout the market during 2022, shelter inflation will be rising. 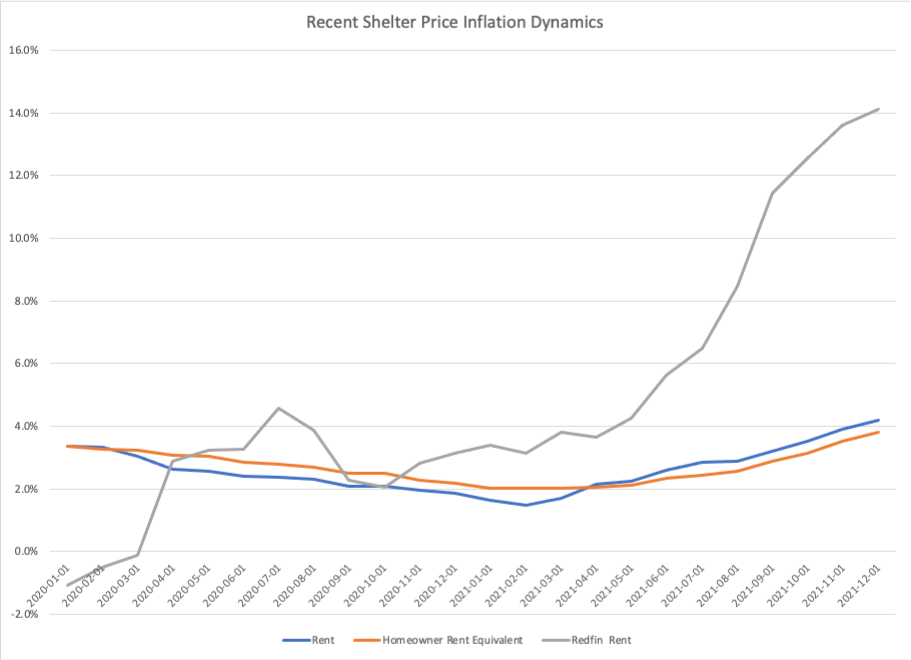 Can’t the Biden Administration do something? Not really. With great fanfare, it announced its Immediate Steps to Increase Affordable Housing Supply, which featured the bottom line: “That’s why today the Administration is announcing a number of steps that will create, preserve, and sell to homeowners and non-profits nearly 100,000 additional affordable homes for homeowners and renters over the next three years, with an emphasis on the lower and middle segments of the market.” Terrific, at least until you realize that there are 142.1 million housing units in the United States. This is a drop in the bucket (taking three years to materialize) that will not affect inflation appreciably.

That’s the problem in a nutshell. Shelter inflation is likely to rise this year. If it rises by only one percentage point (to 5 percent), inflation in the rest of the economy has to essentially disappear (one-half of one percent) for the Fed to reach its 2 percent target. Put differently, shelter inflation will be central to success on the overall inflation issue and an important determinant of Fed behavior.

After only two years, the Section 201 solar tariffs resulted in the loss of 10.5 gigawatts of solar generation capacity and $19 billion of private investment.