On the day before the nation celebrated its independence, the administration handed the country a regulatory bill worth more than $104 billion for just one half of 2014. At the current pace, regulatory costs will eclipse $200 billion, well above even AAF’s projection of $143 billion.

For comparison, the federal government didn’t publish $100 billion in burdens last year until the end of December. This “Year of Action” is quietly unfolding in the pages of the Federal Register, adding millions of dollars in regulatory costs daily.

How do these huge figures compare on a personal level?

Using Census data of affected industries, AAF is able to approximate which states are impacted by these rising cost burdens. Thirty states will bear at least $1 billion in costs, with even small states like West Virginia ($580 million), New Mexico ($570 million), and Alaska ($515 million) incurring substantial burdens. Below are the top ten states by per capita regulatory burden from the first half of 2014:

Here is how these costs are distributed across industries or parts of the government. The blue line represents costs (in millions of dollars) and the red line denotes paperwork burdens (in thousands of hours). The Department of Energy (DOE) and EPA are leading the way with their combined totals accounting for nearly all of the costs. As the chart below illustrates, DOE actually leads the EPA with $50 billion in regulatory costs. 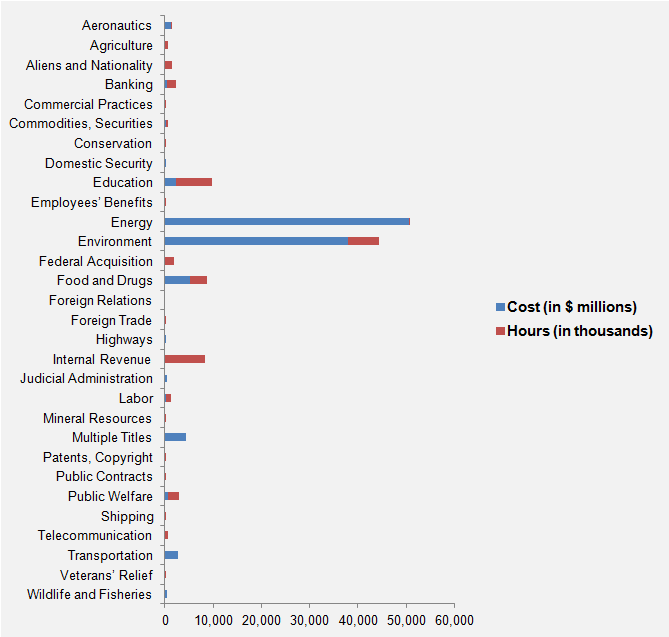 There is no question that the President’s “Year of Action” is delivering substantial regulatory burdens. The staggeringly high figure of $104 billion for just the first half of 2014 has real implications for Americans. It could mean higher energy prices, more expensive food, and pricier consumer goods. With little standing in the way of more aggressive executive action, expect these figures to continue climbing throughout the year.