A regulation is considered “major” if it has an annual effect on the economy of $100 million or more, causes a “major” increase in prices for consumers or changes an industry.

The chart below tracks the number of major regulations since 2005. Note the huge uptick in 2010, with 100 major regulations. No administration in the history of the Congressional Review Act, which became law in 1996 and codified the definition of a major rule, had ever issued 100 major rules in a year, until 2010. 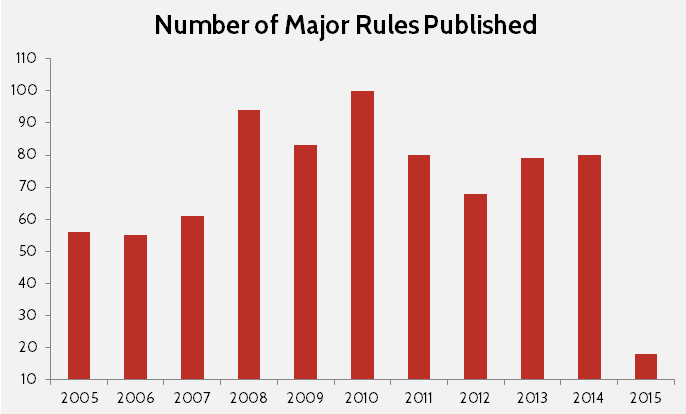 From 2009 to 2014, President Obama’s regulators averaged 81 major rules per year. During his time in office (2001 to 2009), President Bush averaged 62 major regulations per year. And, the 62 major regulations for President Bush happened during a time of the 9/11 terrorist attacks, a major financial reform (Sarbanes Oxley), and the early stages of the Great Recession. President Obama has set a new paradigm in regulation, one that has increased major rulemaking by 30 percent over his predecessor. And there is more on the way.

Presently, there are just 18 major regulations for 2015, according to the Government Accountability Office (GAO), the independent agency that tracks these measures. However, there is a significant lag to that figure, and in all likelihood, the final figure for 2015 will tend closer to the President’s historical average. Readers must also consider the significant regulations scheduled for publication this year: ozone, greenhouse gas standards for power plants, and new fuel efficiency rules for trucks.

The chart below projects the president’s major rulemaking through 2016. The next two years reflect President Obama’s historical average. 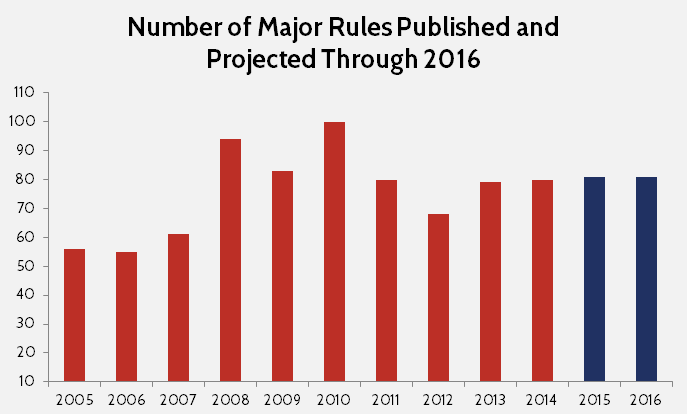 Projecting into the future is an imperfect exercise, but if we assume historical norms will continue, President Obama could easily finalize 644 major rules by the time he leaves office, or roughly 80 annually. Compared to President Bush, this is the equivalent of another year-and-half of additional regulation.

Furthermore, the above figures don’t take into account any surge of “midnight regulation,” during the transition period from one administration to the next. This will depend on the partisan results from the election next November. For example, President Clinton issued a major rule each day from January 1 to 19. President Bush issued ten major regulations during the same period. If history is any guide, expect a wave of regulatory activity during this midnight period that could easily push President Obama’s total past 650 major regulations.

What do these major regulations mean for costs? According to Reg Rodeo, AAF’s online database of all regulation with costs and paperwork burdens, from 2009 to 2014, major regulations imposed, on average, $97 billion in total costs each year. Assuming that average, major rules from President Obama could generate more than $750 billion in long-term economic costs. To put that in perspective, Malaysia’s Gross Domestic Product is only $746 billion.

These costs must be borne by someone. Either company employees face the costs through layoffs or lower wages or companies could bear the burden through reduced profits or pass the costs on to consumers, which also likely cuts earnings. As AAF demonstrated in the “Consumer Price of Regulation,” Americans face up to $11,000 in higher prices because of federal regulations from this administration. These major rules will only increase that figure, driving up energy prices, health care costs, and the affordability of everyday consumer goods.

“I don’t think there is a measure by which there has been a regulatory tsunami.” That was Cass Sunstein, former “regulatory czar,” trying to downplay the President Obama’s executive actions. What “measure” would he like to compare regulatory growth? Major regulation: by the time President Obama leaves office he will have issued 20 to 30 percent more major regulation than his predecessor. Perhaps that’s not a tsunami, but even the administration admits that the most burdensome year ever for federal regulation occurred in FY 2012, under President Obama’s watch.

The White House and its backers might try to dodge their unfortunate milestone, highlighting the benefits of regulation or the Great Recession, but they can’t hide from the figures. GAO has them for everyone to see: 500 major regulations.