The immigration reform debate is heating up, with numerous policy proposals calling for large increases in border security, mass deportation, and reducing legal immigration levels. These policies are costly and economically damaging.

This cost does not factor in the capital expenditures needed to increase our enforcement presence, including finishing the border fence, drastically increasing the number of ICE and Border Patrol officers, building additional detention facilities, and addressing the years-long immigration court backlog.

Much worse than the huge fiscal cost is the tremendous hit to the economy. Undocumented immigrants are in the U.S. to work. Removing the entire undocumented population would shrink the labor force by 6.4 percent and reduce GDP by approximately 6 percent. In 20 years, the U.S. would lose 11 million workers. Real GDP would decline by $1.6 trillion.

Assuming that the large fiscal costs of full enforcement are acceptable, the resulting economic impact may not be. Full enforcement of current immigration law will damage any pro-growth economic strategy.

An increasingly popular proposal calls for reducing legal immigration levels in order to protect American workers. This is an anti-growth policy that fundamentally misunderstands labor market economics and ignores the reality of our current population trajectory. Immigration reform that increases legal immigration and reforms our immigration system to focus more on skills has the potential to raise the pace of economic growth by nearly one percent, raise per capita GDP by over $1500, and reduce the deficit by over $2.5 trillion.

Without immigration reform, the U.S. population, and thus the labor force, will shrink. With sub-replacement fertility rates, the U.S. needs immigrants, with their comparatively high fertility rates, to avoid the fate of countries like Japan, with an aging population and shrinking workforce and economy. Immigrants offer other benefits as well, with a higher labor force participation rate and higher business ownership rate than the native born population.

Immigration does not hurt Americans. As the chart below shows, the real GDP per capita has continued to rise regardless of the number of immigrants admitted to the U.S. Proposals to reduce legal immigration play on the fear that low wage immigrants will displace American workers and hurt the middle class. But the opposite is true economically—the number of immigrants in the U.S. does not adversely impact the middle class. 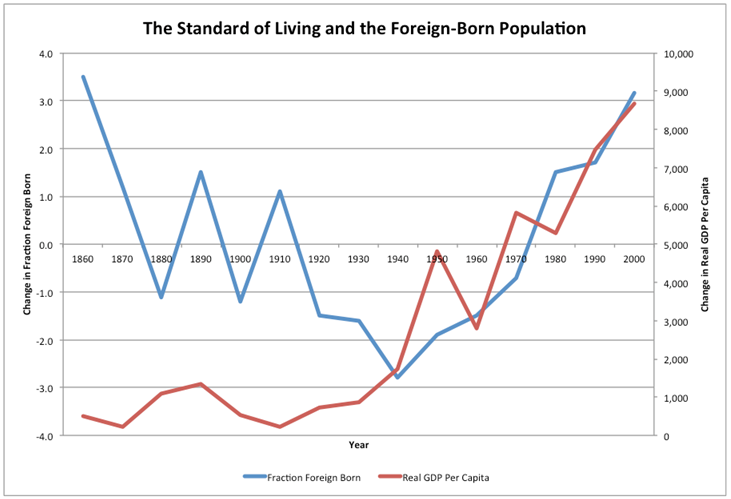 The Road to 5G: A Primer

Update: In November 2021, the United States reached a similar agreement with India and Turkey, the two countries that were not included in the prior agreement…