Fannie and Freddie Increase Their Role in the Multifamily Market

During the 10 years since the federal government took the two government-sponsored enterprises (GSEs) Fannie Mae and Freddie Mac into conservatorship, the multifamily aspect of their portfolio has not typically generated much controversy, perhaps allowing it to go overlooked. But a look at the participation of the GSEs in multifamily lending shows a concerning expansion. Given the GSEs’ role in the 2008 financial crisis, focus should be on reducing the GSEs’ footprint, yet all indications suggest that their role in this market is growing – and at a disquieting rate.

The GSEs portfolio may be divided into two broad categories: single-family; and multifamily. Single-family represents homes or detached dwellings occupied by a single family. Multifamily represents buildings with five or more units, intended to be occupied by multiple families. The obvious example is your typical urban apartment block, but the category covers more homes than that, from retirement communities and assisted living to the vast majority of all affordable housing. An estimated 19 million households in the US live in multifamily housing.

It is well documented that the GSE multifamily business performed well throughout the 2008 crisis, while much of the private market struggled. The GSEs’ presence and performance in this market over the last 30 years has varied, however. For instance, according to the Federal Housing Finance Agency’s (FHFA) Office of the Inspector General, 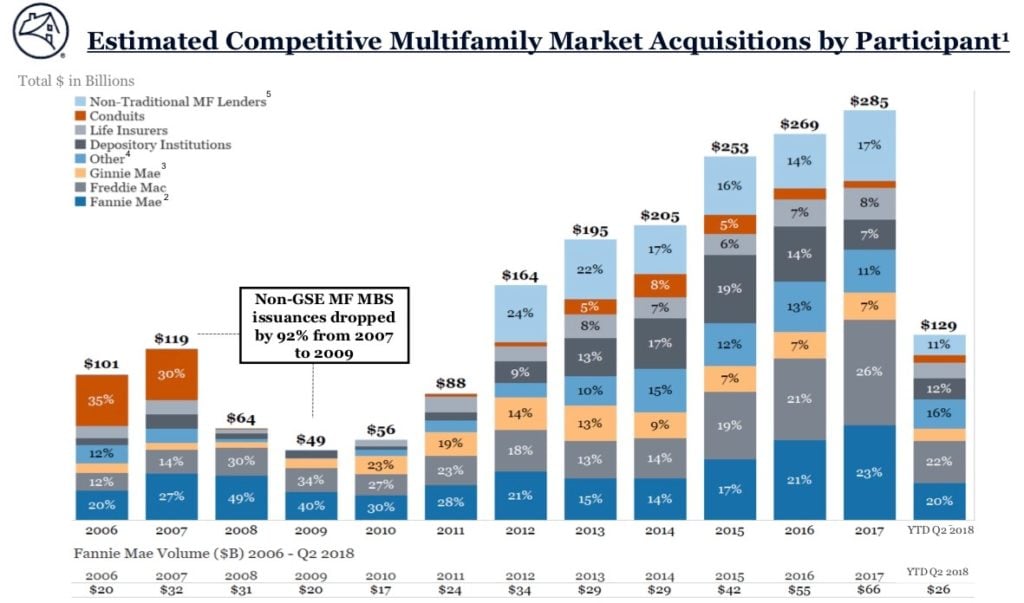 The chart above makes several important facts clear. First, the volume of multifamily lending has vastly increased, from the pre-crisis $101 billion in 2006 to $285 billion in 2017. Even were the percentage involvement of the GSEs in this market to remain at a consistent level, the sheer volume of business would require the GSEs to greatly expand their multifamily exposure. Worse, GSE involvement is not remaining steady; in 2017 the GSEs represented 49 percent of new multifamily acquisitions (securing new loans against multifamily properties) and will very likely exceed 50 percent for the first time in 2018. The pre-crisis (2006) GSE multifamily market share was only 22 percent of all new acquisitions. As a percentage of the total market, according to the Federal Reserve Bank of Boston, the “GSEs and their securitized vehicles currently hold or guarantee 44 percent of multifamily loans, now a higher percentage than banks.”

The GSEs’ actual acquisitions however far exceed this cap because of the various exemptions allowed by FHFA. These exemptions generally fall into four buckets: (1) affordable housing projects (with a scaled approach to credits, based on the market and the number of affordable units); (2) manufactured housing and rural areas; (3) loans to senior housing properties; and (4) certain loans to finance energy- or water-efficiency improvements.

Not only are the GSEs perverting the intent of the caps, these exemptions are allowing a social agenda to facilitate the expansion of the GSEs’ role in the housing market.

Although viewed as a relatively “safe” aspect of the housing-finance system, multifamily lending represents a risk that has at times reflected over half of the GSEs’ credit losses while only representing a small fraction of the overall portfolio. AAF has written at length about the need for real housing finance reform. Whatever path eventual reform takes, the first step must be to reduce the footprint of the GSEs and their role in housing finance. The expansion of the GSE multifamily book of business is a real concern and represents a clear and obvious risk in the event of another financial crisis.