The Congressional Budget Office (CBO) released an update to its periodic economic outlook, which provides Congress with a 10-year economic forecast. The economic forecast also underpins the agency’s budget projections, which are expected later in the month. Today’s report is particularly timely, as policymakers are considering the size and scope of another potential fiscal intervention.

CBO projects real gross domestic product (GDP) growth to average 2.0 percent over the budget window. It forecasts that unemployment will return to below 4 percent within the decade, though it is not estimated to return to levels seen prior to the pandemic. CBO also estimates low-interest rates in the near and medium term, with interest rates somewhat converging with its previous estimates near the end of the decade.

In January of 2020, CBO estimated that the U.S. economy would continue to enjoy moderating, real GDP growth in the near term, followed by persistent real growth of below 2 percent per year. That outlook was generally consistent with those of the Blue Chip forecast and those published by members of the Federal Reserve. The historic shock to the economy from the pandemic has shattered that outlook.

Under CBO’s most recent projections, real GDP is projected to return to its pre-pandemic level in mid-2021 and to surpass CBO’s pre-pandemic forecast by 2025. CBO also projects, however, that the economy will remain below potential until 2025 – at which point it forecasts that real GDP will exceed potential GDP until 2029. GDP will then fall below potential for the reminder of the budget window, CBO foresees. This rise above potential reflects a substantial improvement over CBO’s prior forecast, which held that real GDP remained below potential for the next decade. In nominal terms, CBO forecasts a GDP gap of $808 billion over the period 2021-2025, less than half the size of the most prominent fiscal response package currently under consideration on Capitol Hill. 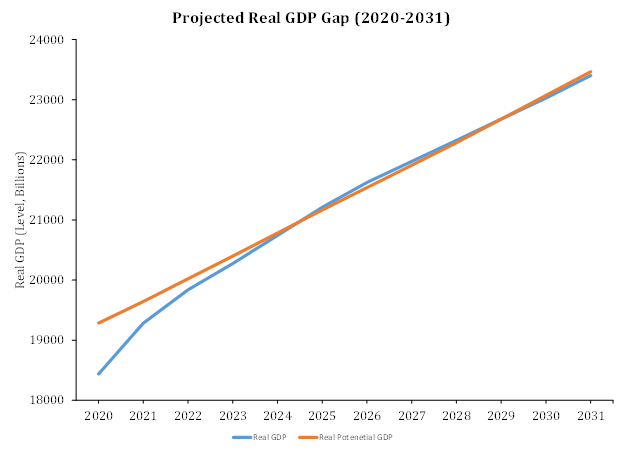 The most recent CBO forecast reflects a substantial improvement in the agency’s labor market outlook. According to CBO, unemployment in 2021 is estimated to be 2.7 percentage points below what it forecast in July. The agency projects that unemployment will decline to levels forecast prior to the pandemic by 2025 and, importantly, remain below its pre-pandemic forecast. CBO is required to assume current law prevails throughout the budget window. Accordingly, the outlook reflects the growth effects from the most recent fiscal response enacted in January but does not assume any additional fiscal intervention.