Medicaid: A Review of the Program after 50 Years

Medicaid, along with Medicare, was created in 1965 as a joint federal-state entitlement program to provide health care coverage to any low-income individual or individual with disabilities who meets the eligibility criteria in his or her state of residence. The Federal government sets minimum eligibility criteria and program requirements which can be expanded by the state, and funds anywhere from 50 percent to 74 percent of a state’s Medicaid expenses, based on the Federal Medical Assistance Percentage (FMAP) formula. Every state has participated in the program since 1982.

Through multiple expansions of the eligibility criteria over the past 50 years, the program now covers more than 71 million men, women, and children. This makes it the largest public health insurance program in the country, covering 22 percent of the population. The growth of this program is likely to quickly prove unsustainable, particularly given the strain already placed on the federal and state budgets. Overall spending on the program will reach an estimated $529billion in 2015, consuming approximately 3 percent of the nation’s gross domestic product (GDP). By 2060, under current law, state spending on healthcare will consume 7.4 percent of GDP, and will be the leading driver of state budget shortfalls. Congress should look for reforms to restore the original intent of the program—to ensure the nation’s most vulnerable have access to the care they need—without further draining the federal and state budgets.

In 1966, 4 million people were enrolled in Medicaid; that number has since climbed to more than 71.1 million.[1] While much of the increase is due to population growth, expansion is also the result of changes to the program’s eligibility criteria throughout the years, particularly in the 1980s, and most notably, in 2010 as part of the Affordable Care Act (ACA). These changes have led the percentage of individuals enrolled in Medicaid to increase from 2 percent of the U.S. population in 1966 to more than 22 percent in 2015.[2]

Medicaid was originally available to “low-income children deprived of parental support, their caretaker relatives, the elderly, the blind, and individuals with disabilities.”[3] Since then, many changes have been made to the eligibility criteria, which have allowed for significant expansions in enrollment: 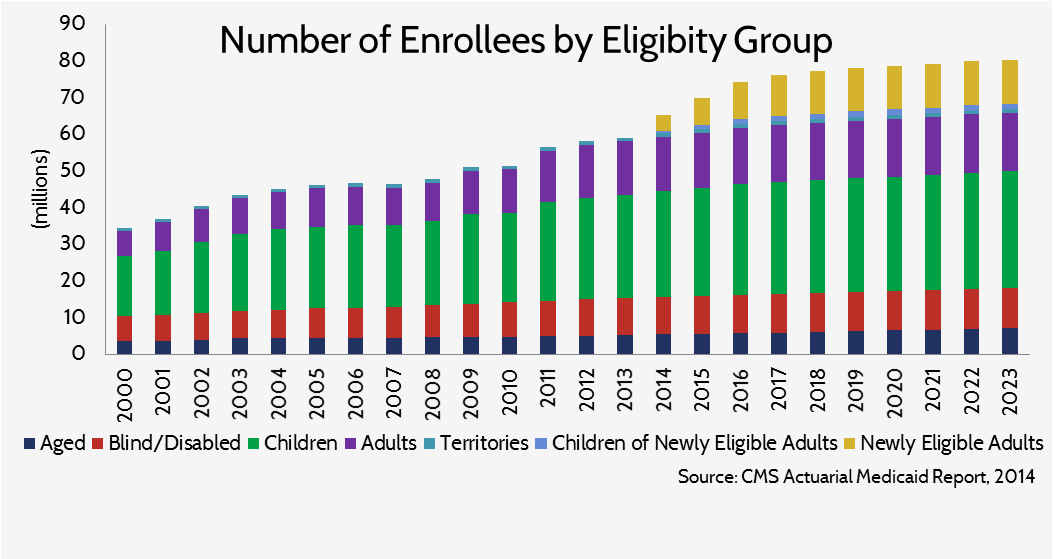 Traditionally, Medicaid, like Medicare, has operated under a fee-for-service payment model. In the 1980s, states began using managed care arrangements with private health care organizations to provide care to their beneficiaries, hoping that this risk-based payment model would help save money. As of September 2014, more than half of Medicaid beneficiaries were receiving care through a Managed Care Organization (MCO).[4]

States also have the option of applying for various types of waivers to amend their Medicaid programs to more closely align coverage with beneficiary needs in their state, and to adopt innovative methods for saving money and/or expanding coverage. Every state uses a waiver to some degree, and as states are expanding Medicaid under the ACA, many are looking to alter their waivers. Some of the recent reforms include charging premiums and establishing health savings accounts (HSAs) for the newly-eligible population, providing premium assistance, eliminating certain required benefits, encouraging healthy behaviors through financial incentives, and discouraging inappropriate use of certain services.[5]

Impact of Medicaid Coverage on Health Outcomes and Access to Care

Unfortunately, despite the reductions in the number of uninsured that these expansions of the eligibility criteria have provided, the evidence shows mixed results on whether or not the health of beneficiaries has actually improved. One study examining the impact of Medicaid expansion to pregnant women in South Carolina and California in 1989 found that, in South Carolina, despite higher enrollment and women initiating care earlier in their pregnancy, there was no improvement in either infant or maternal health. In California, women were less likely to seek care early in their pregnancy, and after adjusting for confounding variables, there was no significant improvement in infant health outcomes.[6] Studies examining similar expansions of coverage to pregnant women in Massachusetts, Tennessee, Georgia, Michigan, and Missouri all similarly found no improvements in health outcomes for these populations.[7] In 1993, women with breast cancer were found more likely to be diagnosed at a later stage and the risk of death was 40 percent higher when covered by Medicaid compared with women covered by private insurance.[8] When Oregon expanded their Medicaid program in 2008, there was such an increase in the use of health care services such that annual health care expenditures increased by 25 percent, but the prevalence of various health conditions was no better than for those without insurance.[9]

As of June 2015, 30 states, including Washington, D.C., have chosen to expand their Medicaid programs under the ACA provision[10]; enrollment in Medicaid has increased by 36.5 percent since 2010, with 12.3 million new enrollees since October 2013.[11] Multiple studies have found that many Medicaid beneficiaries continue to have trouble accessing care. Another study found people with health-related limitations (who almost certainly require more expensive care) enrolled at the highest rates, and in Connecticut an astonishing 40 percent of new Medicaid enrollees switched from private insurance, unnecessarily limiting already scarce resources.[12] Time and again, expansion of Medicaid has increased spending on health care without improving health outcomes.

As more people are now eligible for Medicaid because of the expansion provision in the ACA, we can expect program expenditures to increase even further, particularly given the recent finding in CMS’s 2014 Actuarial Report that expenditures on newly-eligible adults were 19 percent greater than average expenditures for non-newly eligible adults.[17] Spending on this population alone will total $460 billion from 2014-2023.[18] 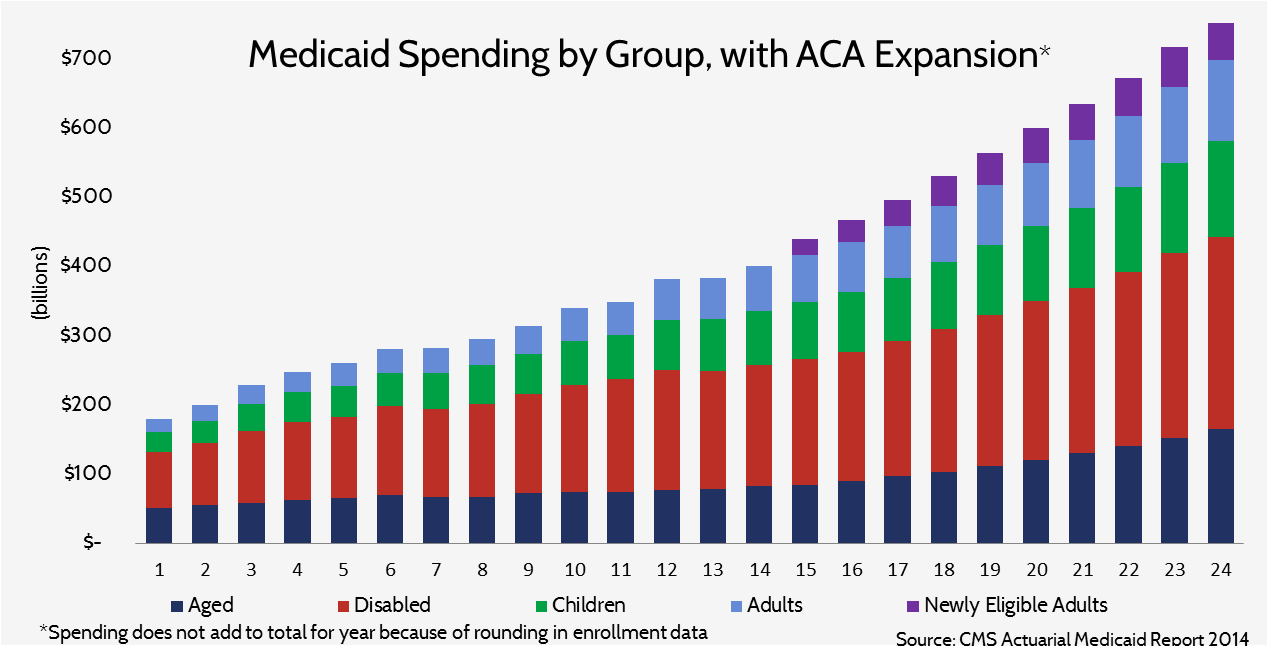 For most of the program’s history, state and federal expenditures have grown at virtually the same rates, until 2009, when they began to move in opposite directions. This is largely a result of Congress allowing temporary increases in the FMAP multiple times to alleviate strained state budgets which resulted from the economic downturn that has plagued the country for much of the past decade.

Unfortunately, the pressure on state budgets is only going to worsen. While much of the cost of the Medicaid expansion is expected to be covered by the federal government—covering 100 percent of costs for this newly-eligible population for the first three years and 90 percent in 2020 and beyond, state expenditures on Medicaid will increase $30 billion over the next 10 years.[19] Expenditures may even increase for states that chose not to expand their programs, by up to $700 million, because of what is known as the “woodwork effect”. In 2012, 43 percent of federal funds that states received[20] and 16.2 percent of state-sourced revenues were spent on Medicaid.[21] In total, Medicaid accounted for 24.5 percent of state expenditures in FY2013, compared with less than 20 percent for elementary and secondary education.[22] In a report released last year, the Government Accountability Office (GAO) found that states and local governments are continuing to face budget shortfalls (currently around 2 percent), and that those shortfalls will continue to get worse for many years to come—not recovering until 2058—given current policies.[23] Health care expenditures, specifically on Medicaid and health care compensation for state and local government employees and retirees, were found to be the main driver of state budget shortfalls. GAO predicts state and local governments’ health-related costs will reach 7.4 percent of GDP in 2060. In order to close the fiscal gap, state and local governments would have to reduce spending (or raise revenue) each year for the next 50 years by 18 percent relative to current expenditures.

The Medicaid program has grown significantly since its inception 50 years ago, becoming the single largest provider of health care coverage in the country. Enrollment has grown from 2 percent of the population to 22 percent. Expenditures have grown from 0.1 percent of GDP to 2.9 percent. Given the continuous growth in enrollment and spending per beneficiary, as well as the financial strain that continues to plague the federal and state budgets, reform is needed now more than ever. Policymakers should work to restore the program’s original intent and ensure that the neediest are able to receive the care they require without breaking the budget.

[15] The large increase in the early 1990s is likely due to a law passed in 1989 requiring states to cover services provided by Federally-qualified health centers (FQHCs).