Medicare at Fifty: The Case for Benefit Modernization

Fifty years ago this month, the Social Security Act of 1965 (SSA) created both Medicare and Medicaid, which remain by far the largest federal health care programs. Unlike the more recent Affordable Care Act (ACA), SSA was relatively uncontroversial. There were several years of extensive debate, but the bill eventually passed both houses with bipartisan support, and today Medicare remains a uniquely popular program. More than 80 percent of elderly Americans, the chief beneficiaries of Medicare, report being satisfied with their health insurance.[1] However, the benefits come at a taxpayer cost. In 2014, the federal government spent $600 billion on Medicare and is projected to spend nearly double that amount by 2025.[2]

Medicare presents the single largest threat to the federal budget and long-term fiscal stability, and as such, requires substantial and immediate reform. Thankfully, the program is slowly acquiring the architecture for a more sustainable future. Through programs like Medicare Advantage (MA) and Medicare Part D, competition among private insurers can create value for beneficiaries and savings for the federal government. Further, the transition from fee-for-service to performance and quality based payments may be instrumental in slowing the rise of health care costs.

Health care in the early 1960s was considerably different. The vaccine for mumps had only just been discovered, and the vaccines for measles and rubella were still several years away. The average life expectancy in the U.S. was 67 years for men and 74 years for women.[3] Prior to World War II, hospitals were just beginning to become places that people went to heal rather than to die. In the decades following the war, advances in surgery and antibiotics helped push hospitals to the forefront of the medical landscape, spurred along by federal support for construction and research.[4]

The post-war economic expansion didn’t provide equal access to medical advances. Hospitals had become increasingly effective at extending people’s lives, but only through new and expensive techniques that typically resulted in extended hospital stays for recovery. The hospital industry and hospital insurers had trouble financing care for aging Americans who couldn’t afford to pay for their care. Presented with the option of restricting care for seniors or finding someone to finance the bill, the hospital industry pursued the latter.

Accordingly, the primary objective of the new Medicare program was to fund inpatient hospital care for elderly Americans—over the age of 65—which is evident by the structure of the program.[5] Medicare is divided into distinct “parts” that address different aspects of health care. Medicare Part A funds inpatient hospital care and is the only portion of SSA that received dedicated tax funding. The architects of the bill added a component to the payroll tax that explicitly funded Medicare spending under Part A. Tax increases and benefit restructures notwithstanding, this funding mechanism continues to provide sufficient funding for all health care covered by Part A. The other Medicare silo, Part B, covers health care provided outside of a hospital, which in 1965 did not constitute a large portion of health care spending by American seniors. Accordingly, Part B is optional and funded partially by a premium paid by Medicare beneficiaries and partially by the general tax revenue of the federal government.

The context and motivation for the initial architecture of Medicare, in particular the emphasis on hospital insurance, is crucial to understanding the current need for reform. Over the course of the past fifty years, the program has responded and adapted to accommodate beneficiaries that live longer and require new types of medical care but, in many important ways, remains unchanged. The program designed to care for the Greatest Generation cannot sustainably provide health care for their children.

Over the past fifty years, demography and medicine combined to transform Medicare from a program covering 1 in 10 Americans for the last 15 years of their life to a program covering 1 in 6 Americans for their last 20 years. [6] In addition to providing health care to more people for a longer time, Medicare is paying for increasingly more expensive care. Health care prices grew an average of 6 percent per year between 1965 and 2010, outpacing general price inflation by about 2 percent.[7]

Yet, despite the growing demands of beneficiaries, Medicare Part A has always been able to pay its hospital bills through dedicated payroll tax funding. To ensure this, the program has been required to raise taxes, expand the tax base, and increase the deductible and coinsurance—all of which have their own ill side effects—and still faces the threat of insolvency within the next 15 years.[8] But adjustments have prevented hospital bills from becoming an undue burden on the federal budget. Medicare outpatient bills cannot make the same claim.

Outpatient care was not intended as the centerpiece of treatment of the elderly. For nearly 20 years, Medicare consistently spent 70 percent of total expenditures on inpatient services, but today Part A accounts for less than half of Medicare expenditures and continues to decline.[9] Medicare Part B was originally designed to be financed by a 50/50 split between general tax revenue (which includes federal debt) and beneficiary premiums, but that arrangement quickly proved overly burdensome for seniors and politically unattractive. In 1972, Congress acted to prevent the Part B premium from increasing by more than the Social Security Cost of Living Adjustment (COLA).[10] Over the course of the next ten years, the portion of Medicare Part B financed by beneficiary premiums predictably fell, as overall costs grew much faster than COLA. By 1984, premiums accounted for only 25 percent of overall costs, a level that Congress has since maintained, and the onus of funding Medicare’s expanding outpatient program continues to shift towards general tax revenue and the federal debt.[11]

In response to the evolution of health care delivery, lawmakers have made important changes to the program. Since the early 70s, Medicare has been allowed to contract with Health Maintenance Organizations in an effort to allow innovations in private health insurance to create new value and savings for Medicare beneficiaries. Congress expanded private Medicare insurance in 1997, and again in 2003, to create the modern MA program. Sometimes referred to as Part C, MA now accounts for 30 percent of total Medicare enrollment and is steadily growing in popularity.[12]  Congress also created Medicare Part D in 2003 to provide a comprehensive outpatient prescription drug benefit. Similar to MA, Part D is based on a private insurance plans that compete for beneficiaries and the program has been both popular and cost-saving.

While the new additions to the program have modernized Medicare benefits, the core of the program remains unsustainable. Payments to physicians and hospitals under Medicare are based on a “cost plus” methodology, referred to as fee-for-service. For every service that a beneficiary receives, Medicare pays a pre-determined amount according to a fee schedule. The program employs various payment calculation methodologies to estimate a reasonable price for a given service in an attempt to put some pressure on hospitals and physicians to keep down costs. In reality, Congress is rarely able to enforce any meaningful payment reductions, and is frequently pressured to raise payment rates. The fee-for-service payment methodology provides very little incentive to manage the health of beneficiaries or reduce over-utilization, which contributes to the inexorable rise of health care spending.

Despite consistent debate among think tanks and lawmakers over the flaws of Medicare policies, the program is popular among its beneficiaries. A poll found that 85 percent of beneficiaries were satisfied with Medicare fee-for-service and 88 percent were satisfied with MA.[13] This popularity has even led progressives, including some presidential candidates, to call for establishing a system of universal health care using Medicare as the sole payer for medical bills in the United States. Unfortunately, the rich benefits of government insurance come at a cost, which is becoming a large and unsustainable budgetary burden. 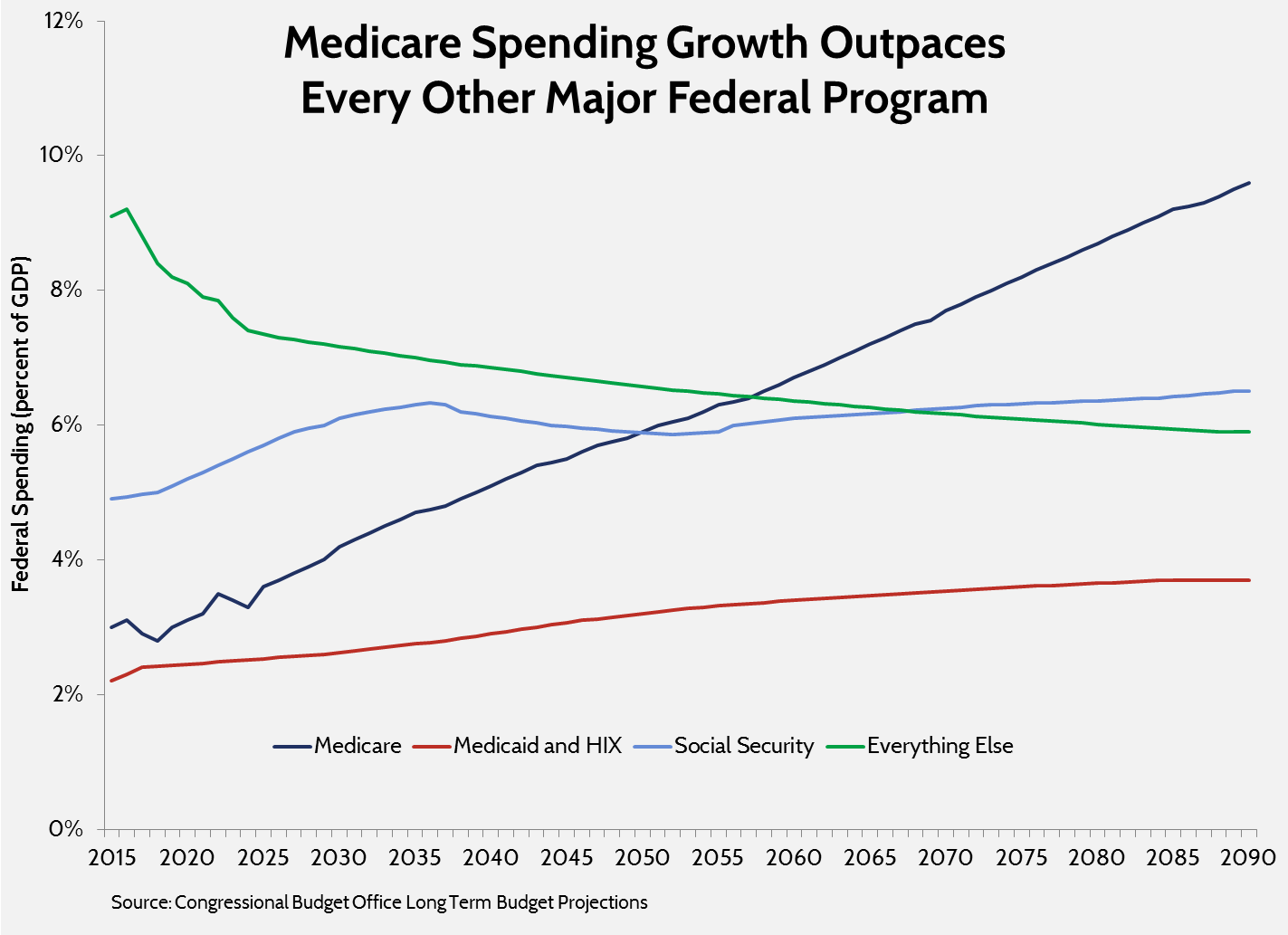 The long-term federal budget is badly unbalanced. In 2015, government spending will exceed revenue by 16 percent, and the deficit is expected to grow.[14] By 2040, the total debt held by the American public is projected to exceed the total value of the US economy.[15] The budget problems have no one sole culprit, but Medicare is a disproportionate source of liability. Spending on Social Security—another benefit program grappling with a larger and longer living population of seniors than originally intended—is projected to increase roughly 25 percent over the next 25 years. Over the same time period, spending on Medicaid and exchange subsidies is projected to increase by 32 percent. Net spending on Medicare is expected to climb by 70 percent over the next 25 years, and by 2050 will surpass Social Security as the largest federal program.[16]

It is not necessary to look 25 years into the future to see that Medicare spending and the associated interest on the debt required to finance that spending is urgently calling for reform. In 2014, the government spent $600 billion on Medicare—more than spending on the military and more than the combined federal spending on every non-defense discretionary program which includes education, social welfare programs, and infrastructure investment.[17]  Even at this high level of funding, the program is unsustainable. The budget account that funds hospital payments under Medicare is projected to be bankrupt by 2030.[18]

As the health care needs of an aging population become both more complex and expensive, increasing Medicare spending may be unavoidable. But it doesn’t come without consequences. The Congressional Budget Office writes that the large and growing federal debt may lead to slower economic growth, reduce the nation’s ability to respond to environment or security crises, and ultimately risk a fiscal crisis. Rather than recklessly expand coverage under Medicare, the program needs to undergo serious reform to ensure long-term stability without sacrificing benefits already guaranteed.

The budgetary outlook for Medicare is poor, but there is still reason to be optimistic about the future. Medicare Part D has shown that the government can control costs by allowing insurers to compete on premiums and benefits. Expanding these principles to other areas of the program will help beneficiaries get modern coverage while also providing those benefits as efficiently as possible through robust competition. Payment reform models have also begun to take hold in various aspects of Medicare. Those models are still a long way from providing system wide benefits—or local benefits in some cases—but the program is slowly shifting away from a wasteful fee-for-service design. Medicare reform needs to be a keystone of any agenda that seeks not only to secure quality health care for American seniors, but to control the long-term debt and restore fiscal stability to the budget.

[5] This is also true more broadly as the driving purpose of the entire SSA. Medicaid was supported by progressive elements of the Democratic Party but would have had difficulty passing independently.

[8] “2014 Annual Report of the Boards of Trustees of the Federal Hospital Insurance and the Federal Supplementary Medical Insurance Trust Funds,” July 2014, available at: http://www.cms.gov/Research-Statistics-Data-and-Systems/Statistics-Trends-and-Reports/ReportsTrustFunds/downloads/tr2014.pdf

[18] “2014 Annual Report of the Boards of Trustees of the Federal Hospital Insurance and the Federal Supplementary Medical Insurance Trust Funds,” July 2014, available at: http://www.cms.gov/Research-Statistics-Data-and-Systems/Statistics-Trends-and-Reports/ReportsTrustFunds/downloads/tr2014.pdf