The Kaiser Family Foundation recently released polling on Americans’ views of the pharmaceutical industry and the costs of prescription medications. Not particularly surprisingly, 55 percent of those polled expressed an unfavorable opinion of these companies and 72 percent said the cost of prescription drugs was unreasonable. Perhaps more surprising is that Kaiser reported 83 percent supported allowing the government to negotiate drug prices in Medicare, and 76 percent supported limiting the amount companies can charge for high-cost drugs.

There has been a litany of problematic policy proposals in recent days, at least in part because of the publicity surrounding the polling results. Many are rehashes of long-stymied efforts by progressive advocates for government control of the health care sector, but the polling results are being used to repackage them as consensus reforms.

Packaging aside, federal price negotiation, drug rebates, price caps, and re-importation of drugs remain poor policy choices. Moreover, it turns out that more recent polling and a deeper look at the Kaiser poll reveal that these bad policies are, in fact, far from consensus solutions.

Pharmaceuticals are an important part of modern medicine. However, since 1960 spending on pharmaceuticals has rarely topped 10 percent of total health care expenditures, is currently is below that mark and is projected to be level over the next decade: 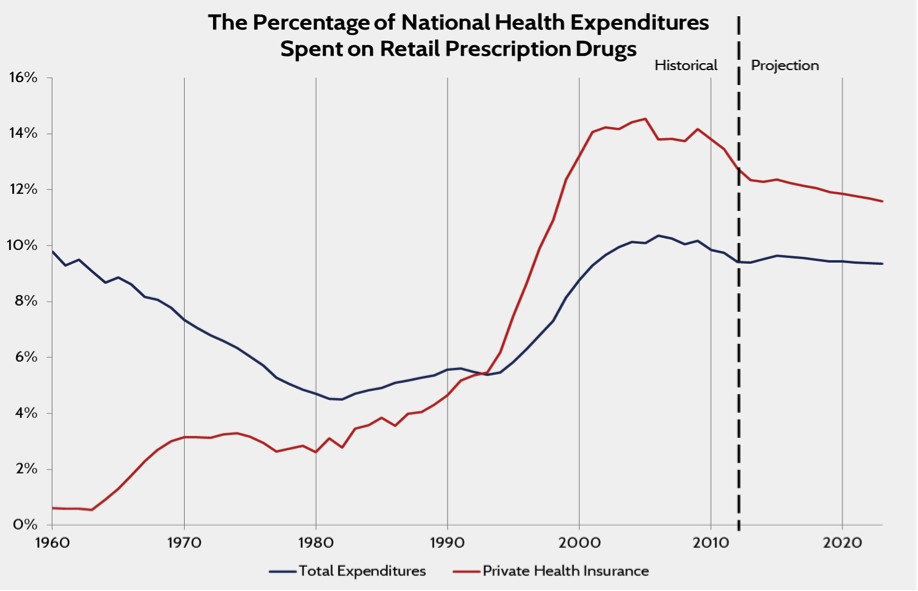 Despite this, in the weeks since the Kaiser poll was released a number of policies aimed at reducing the role of the private sector in health care, particularly targeting pharmaceuticals, have been proposed by various elected officials, outside groups, and presidential candidates. These policies are not new; they’ve been around for years and repeatedly rejected for good reasons:

One might think from the phrasing of the Kaiser question that no negotiations occur between the Medicare prescription drug program and drug manufacturers. In fact, the Medicare Part D program has robust negotiation and competition built into the fabric of the program. Insurance companies offering drug coverage through Part D negotiate directly with manufacturers to get the best price they can for the drugs they provide. Getting a lower price benefits the prescription drug plan directly, but it also allows it to lower premiums to attract seniors. In this way, the negotiations drive premiums, copays and overall drug costs down. Giving Medicare itself the legal authority to negotiate directly with manufacturers will either result in a single negotiated price for each drug—which will then have to be accepted by all insurers at the same price—thus undermining the competitive structure of Part D, or it will result in nothing because the reality is that the government does not actually have any Part D enrollees nor the leverage that comes with delivering a large market to manufacturers that the plans already exert.

Medicare Part D is overwhelmingly popular with beneficiaries, with overall approval ratings regularly exceeding 90 percent.[1] Also, the Congressional Budget Office (CBO) has examined proposals to allow Medicare to negotiate directly, and found that such authority would have “a negligible effect on federal spending because [we] anticipate the Secretary would be unable to negotiate prices across the broad range of covered Part D drugs that are more favorable than those obtained by Prescription Drug Plans (PDP) under current law.”[2] The program is popular, works, and should not be fundamentally altered without good cause.

Reducing the Exclusivity Period for Biologics

Biologic medications are the most promising frontier in the search for new cures. Due to their difficult and costly manufacturing process, however, biologics are also among the most expensive medications currently on the market. Biosimilars are—for lack of a more exact example—roughly to biologic drugs what generics are to name brand pharmaceuticals, albeit with several caveats. Incentivizing the development of biosimilars sounds good in a press release, but lowering the exclusivity period for new biologics (currently set at 12 years) will fail for two reasons. First, a significant reduction in the exclusivity period will endanger the developer’s ability to make back their research costs, and second, because of the previously referenced manufacturing costs, biosimilars are unlikely to be priced at steep discounts compared to the original biologic.

Allowing Re-importation of Drugs from Outside the U.S.

The US has higher drug costs than most other developed nations. This is largely because of price controls by foreign governments, but it tempts some to advocate that the drugs be re-imported back to the US.  For example, medication A is manufactured in the US where it is sold for $50 a pill. The same medication is also shipped to Canada where it is sold for $35 a pill. Under current law it is illegal – largely for safety reasons – for Americans to purchase that drug from a Canadian pharmacy and have it shipped back to the US. The FDA has enough of a challenge ensuring the US drug supply chain is safe and uncontaminated. Once drugs leave the country the FDA no longer tracks them, nor do they have the ability to confirm they are safe. It would be costly and complicated for the FDA to ensure the safety of re-imported medication.

A second serious problem is that re-importation effectively adopts the price controls of other countries in the US. Those very controls have made the innovation of drugs less feasible. The cost of developing a new drug today averages $2.6 billion and takes more than ten years.[3]

The export and re-importation of drugs from free-riding European countries de facto submits American drug manufacturers to the research-killing laws of those nations, and will limit drug manufacturers’ ability to invest in new research. Without that research, pharmaceutical research will slow and eventually stall to the detriment of all countries.

Drug rebates are a tax on manufacturers, pure and simple. Drug rebates in the Medicare program would be a tax on manufactures, and that tax would be passed on to insurers, patients, and in the case of Part D, ultimately to the Medicare program through increased premiums. To the extent the rebate/tax is not passed along, it will have to come out of research, harming innovation in the industry. In 2011 President Obama proposed just such a rebate scheme, and AAF found that the proposal could reduce pharmaceutical and related employment by up to 238,000 jobs over 10 years.

The Consensus that Wasn’t

A closer look at polling shows there is nowhere near the consensus that has been purported. While 83 percent of Americans say they support allowing the government to negotiate with drug companies, the same survey shows that 51 percent of Americans believe that private market competition is better suited to keeping down drug costs than is federal regulation. Further 61 percent of the Kaiser respondents felt that pharmaceuticals have made life better for Americans, and despite widespread concern about drug costs, 72 percent said that they have an “easy” time affording their medications.

According to the Consult, 51 percent of respondents oppose letting the government set drug prices, while only 38 percent support. Seventy-seven percent believe that prescription drugs reduce spending on more expensive medical treatments, and 75 percent believe that prescription drugs prevent expensive hospitalizations. The proposals above would lead to a stagnant pharmaceutical marketplace with less innovation and research, at odds with the 86 percent that told the Consult that encouraging development of new treatments should be a major priority for the next president and Congress. Further, 61 percent of respondents believe patient access to drugs would be limited if the government set prices, and 65 percent agree that fewer medicines will be developed if the government gets into the price fixing business.

Perhaps most importantly, those surveyed believe the private sector is better able to negotiate the price of drugs than the government 49 percent to 23 percent, and only 24 percent believed the law should be changed to allow Medicare to set the price of drugs.

Developing policies that promote affordable drugs is necessary and valuable to the sustainability of our nation’s health system and the patients who are served by it. We must keep in perspective, however, that this is not the first time the health care market has seen new, revolutionary, and very expensive medications come along. In every case the market has responded when given the chance. Solutions are needed for ensuring that those who need the most expensive treatments have the wherewithal to obtain them, but federal price controls will not be most effective solution. Nor is there a consensus among the American people for that kind of approach.

The Road to 5G: A Primer

Update: In November 2021, the United States reached a similar agreement with India and Turkey, the two countries that were not included in the prior agreement…