As part of the federal government’s deconstruction of the AT&T phone system in the 1980s, the FCC created the Lifeline program to subsidize telephone service for low income households. Since then, the program has grown, from 15 states and the District of Columbia in 1987[1] to a nationwide program with a budget of $1.6 billion in 2014.[2] The Federal Communications Commission (FCC) recently announced plans to make the Lifeline program bigger to subsidize the purchase of broadband by low-income households, and to reform some aspects of the program that have long needed to be changed.

Lifeline is a subsidy program that connects low income households in every state, territory, commonwealth, and on Tribal lands to wired and wireless telephone services. Lifeline is one of the four primary programs that form the Universal Service Fund (USF). Other subsidy programs for rural and high-cost areas, rural health care facilities, and schools and libraries were created by the 1996 Telecommunications Act. Lifeline is the oldest of the USF programs, as it began in 1985. Currently, the discount is set at $9.25 per month per household. 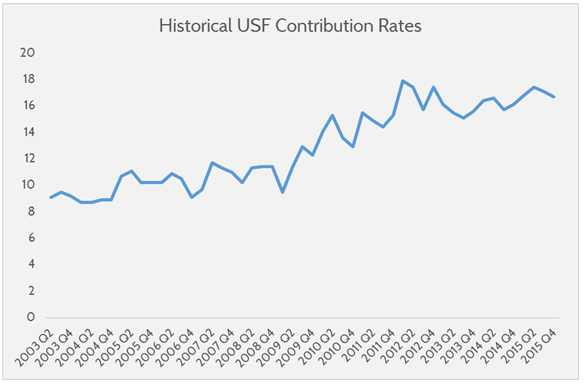 How Lifeline was Created

When the Lifeline program was created, many argued that it was a natural extension of the concept of universal service, a driver for the 1934 Communications Act. However, universal service was not written into the original 1934 act nor was it part of the general congressional discussion surrounding its passage.[4] In the late 1800s and into the 1900s, two competing telephone services often vied for adoption in a region. Universal service was merely a business campaign to unite these two systems under a single company.[5] Many now think of universal service as synonymous with service for all, including subsidies to encourage adoption, but these cross subsidies came about from a decades-long back and forth between federal regulators and state regulators. Indeed, what many think of as universal service came about only in the aftermath of the AT&T breakup. From 1934 onwards, the cost of local deployment increasingly fell on the long distance service, not as part of a grand plan for universal service, but for the benefit of local constituencies enabled by local regulators who banded together.

In 1935, the cross subsidy didn’t exist. By 1952, 5 percent of the cost of local telephone plants were being allocated to interstate services, which was then upped to 7 percent by 1965. At first, the FCC actually opposed these increasingly burdensome transfers, in part because local regulators were gaining an upper hand over federal regulators. A reconceptualization of government’s role in society and communication policy along with a concerted public interest movement in the 1960s made universal service an expression of broader notions of Great Society egalitarianism, where ubiquitous communications infrastructure would contribute to the national unity and opportunity.[6]

After changes in 1970 with the Ozark Plan, local rates were increasingly subsidized by impositions on long distance. In 1965, just 7 percent of the local costs were being funded by long distance service. By 1982, this had dramatically changed; over 27 percent of local costs were shifted towards interstate service. The FCC again tried to get rid of this system in 1982, only to face ire in Congress, leading to the passage of a bill ensuring the Lifeline program. Thus, the broad story is one from no cross subsidies in the 1930s to a highly cross subsidized service in 1980s that continued with the Lifeline program. Even in 1965 when there was little cost shifting, telephones were in 80-85 percent of homes and the increase over the next two decades were marginal at best. Understandably, the Government Accountability Office (GAO) has noted that the structure of the Lifeline program “makes it difficult to determine a causal connection between the program and the penetration,” because wide adoption existed far before any concerted effort.[7]

The Effect of the 1996 Telecommunications Act

After Congress passed broad reforms with the Telecommunication Act of 1996, Lifeline was incorporated into the newly created Universal Service Fund (USF) and packaged with three new programs that supported the communication needs of rural and high-cost areas; rural health care facilities; and schools and libraries. The accompanying committee report explained that “this new section is intended to make explicit the current implicit authority of the FCC and the States to require common carriers to provide universal service.”[8] In other words, the 1996 revisions made explicit what the FCC had no prior authority to do.

The 1996 law enshrined agency efforts to ensure “quality services” are “available at just, reasonable, and affordable rates,”  a new concept.[9] Local and concentrated constituencies were able to wrangle asymmetrical regulations, but over time, the fights were forgotten, and a new revisionist agreement about the purpose of the program took hold. Almost word for word, the language enabling the broader universal mandate comes from the first section of the original 1934 Act, but it leaves out any mention of a rapid, efficient communication regime, a key provision in the original law. Commissioners from across the political spectrum have lamented Lifeline’s lack of oversight, but the enabling statute does little to guide the program towards reachable goals.[10]

As the FCC considers reforms to the Lifeline program, many assume that market mechanisms cannot promote the advanced communications services, that local telecommunications access needs to be subsidized to become universally affordable, and that a deregulated marketplace is easily reconciled with subsidies.[11] But these are fundamental assumptions that should be questioned, especially as Congress undertakes rewriting the entire Communications Act.

Consumer preferences have changed since 1996 with the adoption of new technologies. The FCC has responded by changing parts of the Lifeline program to include these advances. Beginning in 2005, the FCC made changes to the program to allow for wireless service, expanding the program from its initial purpose as a landline subsidy. Then, in 2008 under the TracPhone decision, the FCC paved the way for carriers other than those with physical facilities to offer Lifeline services. While the FCC found that a variety of benefits would be conferred to consumers with these non-facilities based carriers, the agency didn’t quantify the benefits or estimate the potential increases in cost of expansion.[12] With fewer restrictions, a number of companies popped up just to serve this audience, and the program quickly ballooned by 160 percent in just a couple years.[13] Today, the program serves 12 million households, up from the 7 million 2008.

In a follow up study of the program expansion, the FCC found that an estimated 15 percent of Lifeline subscribers could be ineligible for program benefits. In reaction, the FCC reformed Lifeline with 11 changes, which have gone a long way to reduce, waste, fraud, and abuse. Yet other key changes highlighted by the GAO have yet to be implemented, and the FCC has never endeavored a formal program evaluation.[14]

Reforming Lifeline for the 21st Century

Currently, the FCC is looking to expand the Lifeline program to allow consumers to use the subsidy to purchase broadband through eligible telecommunication companies (ETC’s). One proposal in the works would shift the eligibility requirements away from the companies towards a third-party. Meanwhile, the FCC has admitted that household demand for telephone across all incomes is relatively insensitive to changes in the price of the service. Unlike the other parts of the Universal Service Fund, Lifeline doesn’t have a budget cap, which combined with the lack of an evaluation scheme, seriously undermines the legitimacy of the program. The main reform the FCC is advocating would change who determines eligibility. Rather than having the ETCs determine eligibility, the FCC has proposed that an independent third-party document and determine eligibility of users.[15] While this would be an effective step towards reform, the much larger question is about the effectiveness of the program. Since it is a broad based welfare program, even the GAO has suggested since the late 1980s that the program should be transitioned from the FCC towards general Congressional control.

While the Lifeline program has a long history, changes need to be made to bring it into the 21st century. The FCC has been stuck for too long in the lofty language of inspirational politics and paid little attention to the much needed task of setting defined goals and establishing mechanisms for evaluation. Only when this broad change is implemented will the program truly begin to serve those whom should be receiving Lifeline assistance.

[10] Federal Communications Commission, In the Matter of Lifeline and Link Up Reform and Modernization Lifeline and Link Up Federal-State Joint Board on Universal Service Advancing Broadband Availability Through Digital Literacy Training, https://apps.fcc.gov/edocs_public/attachmatch/FCC-12-11A1.pdf

[15] The Federal Communications Commission, In the Matter of Lifeline and Link Up Reform and Modernization Telecommunications Carriers Eligible for Universal Service Support Connect America Fund, https://apps.fcc.gov/edocs_public/attachmatch/FCC-15-71A1.pdf.