The Woodwork Effect: Costing Non-Expansion States Up to $700 Million in 2014

Though the open enrollment period for the health insurance exchanges has come to a close, the total number of newly enrolled Medicaid beneficiaries is still climbing for 2014. Many questions have been raised regarding the number of newly enrolled individuals as a result of the Affordable Care Act (ACA). However, the ability to discern which individuals were previously eligible or are newly eligible is still a challenge. Data is not yet available for the states that have expanded their Medicaid programs, as many system wide hurdles exist in separating the enrollee determinations based on expansion vs. non-expansion eligibility. Also, Medicaid does not have an open enrollment period, and instead offers on-going enrollment throughout the year. In states that are not expanding Medicaid, some of the numbers are more transparent. Individuals joining Medicaid rolls in these states are part of what is known as the “woodwork effect:” previously eligible individuals that are coming out of the “woodwork” to apply for coverage. The addition of these enrollees in states that chose not to expand Medicaid will prove problematic for state budgets, causing an unplanned increase in Medicaid spending.

The Congressional Budget Office addressed this phenomenon, stating that individuals who were eligible for Medicaid prior to the ACA, but never enrolled, would be drawn to sign up because of the individual mandate or because of increased publicity surrounding health care reform. This effect has been seen in other large scale expansions of public entitlement programs. For example, during the Massachusetts health reform effort in 2006, Medicaid enrollment increased by 16.3 percent among parents already eligible for the program.[1] Even though these individuals were already eligible for Medicaid, they did not participate in the program until a health care overhaul was implemented in the state. Just as in Massachusetts, early ACA estimates show an increase in the pre-ACA eligible population of roughly 6 percent.[2]

Avalere Health recently estimated that, if enrollment rates continue at their current speed, states will see an increase of 3.7 million beneficiaries nationwide enrolled as a result of the ACA by the end of March.[3] According to the Centers for Medicaid and CHIP (CMCS) February enrollment report, Medicaid enrollment in states that did not expand their eligibility has increased by 380,000 individuals since October.[4] Unlike newly eligible enrollees in states expanding Medicaid, these additional beneficiaries come without the increased federal matching rate, and thus stress state budgets much more than a newly eligible population would.[5] Using average costs and federal matching rates from the Kaiser Family Foundation, these new enrollees will cost the non-expansion states $700 million in 2014 alone.[6]

The following map and table further explain the woodwork impact on non-expansion states. The map depicts the cost incurred from the woodwork population, and some savings in states that are not experiencing increases in enrollment. States that experience higher enrollment and therefore higher Medicaid costs are darker shades of red, while the states in shades of blue saw decreases in Medicaid enrollment, realizing savings in state costs to the program. The table below explains the woodwork enrollment and cost estimates in non-expansion states.

The changes in enrollment over the last five months are the best available data on observing the magnitude of the woodwork effect in non-expansion states. However, the changes in Medicaid enrollment could also be influenced by seasonal effects or a recovering economy—the national unemployment rate has fallen 0.5% since October.[8] These increased cost estimates do not take into account any approximation of the effect of economic growth or seasonality on enrollment. 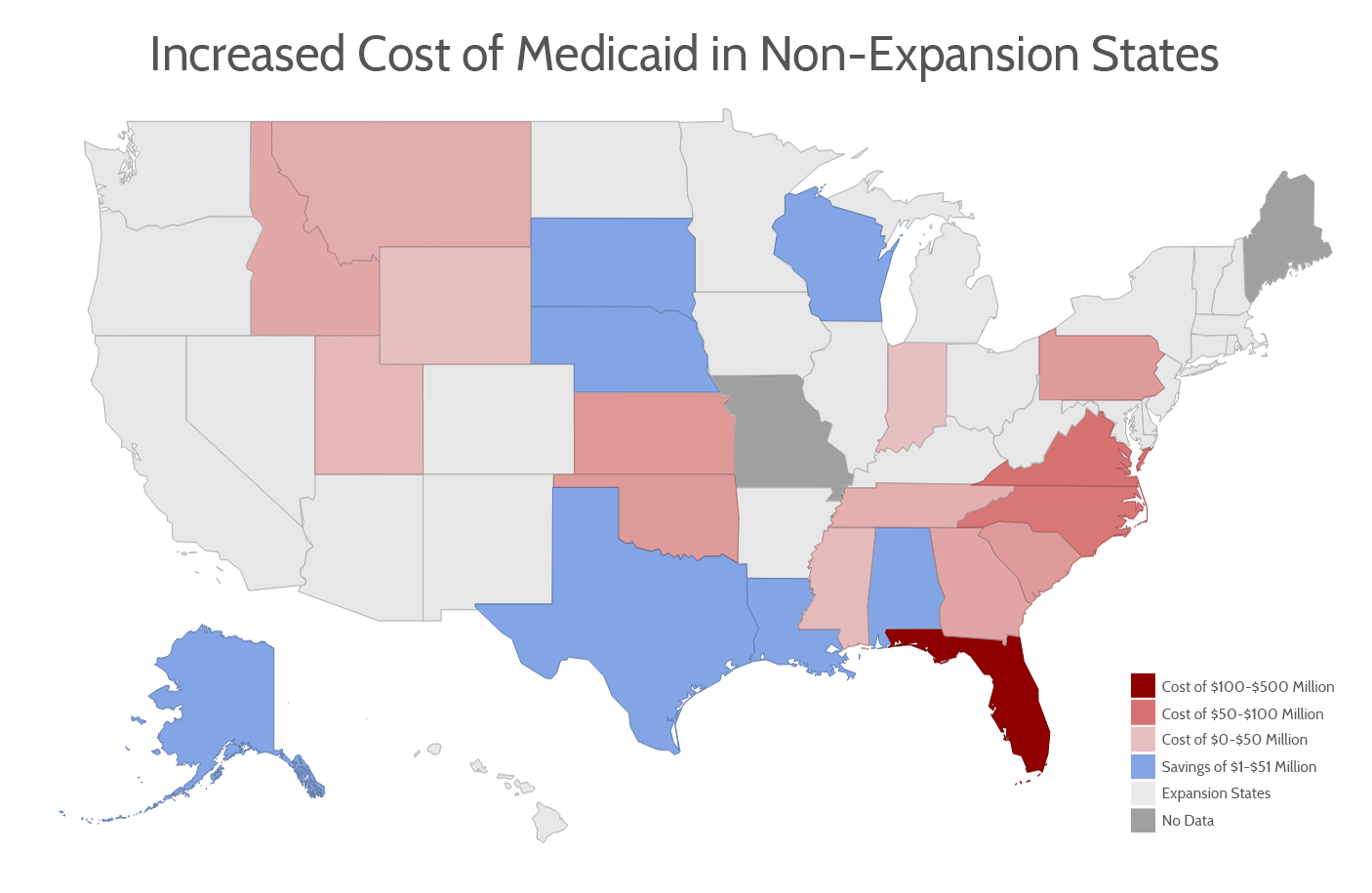 [8] Unemployment data is available from the Bureau of Labor Statistics at: http://www.bls.gov/data/#unemployment