U.S. Participation in the International Monetary Fund (IMF): A Primer

The G20 annual meeting, held for 2018 in Bali in October, attracted perhaps more attention than usual in the wake of the International Monetary Fund (IMF) downgrade of the forecast of global economic growth from 3.9 percent to 3.7 percent. Additionally, the IMF projects the U.S. economy to grow 2.9 percent this year, as expected, but predicts that U.S. growth will slow to 2.5 percent next year due to the impacts of trade disputes with China and as benefits felt from recent tax cuts wear off.

This downgrade highlights questions about the state of the global economy, but it also serves as a timely reminder of the work of the IMF itself.

Just what is the IMF? Where did it come from, and what does it do? And what is the role of the United States in it? These fundamental questions are worth exploring from the perspective of both international economics and domestic fiscal policy.

The Great Depression, the most severe financial crisis of the 20th century, caused worldwide gross domestic product (GDP) to fall an estimated 15 percent in the early 1930s and international trade to contract by 14 percent. Between 1929 and 1933, more than 5,000 banks failed. In many countries the impacts were felt until (and contributed to) the Second World War. The collapse of the international financial system caused by the combination of the Great Depression and the Second World War spurred the need to rebuild a more resilient global financial system.

In 1944, the U.S. government invited Allied nations to send representatives to a conference on international monetary policy at Bretton Woods in New Hampshire. John Maynard Keynes of the British Treasury and Harry Dexter White of the U.S. Treasury were the driving forces behind the conference. (Interestingly, White was later confirmed to have been a Soviet informant). The purpose of the conference was to promote open markets; U.S. Treasury Secretary Henry Morgenthau declared the conference would end economic nationalism.

The Bretton Woods conference resulted in the creation of the IMF, the International Bank for Reconstruction and Development (IBRD), and a number of other recommendations for international cooperation. The key element to the conference was the introduction of a system for convertible currencies at fixed exchange rates, pegged to gold, with the dollar redeemable for gold at $35 an ounce. The IMF oversaw this currency exchange system, and it also controlled access to the IBRD (as membership of the IBRD was not possible without membership of the IMF). The IBRD was the key international body financing reconstruction via loans in the wake of the Second World War.

The Bretton Woods system persisted until the 1970s, when the United States unilaterally ended the convertibility of the U.S. dollar to gold in what was known as the Nixon shock. At this point the IMF’s mission shifted to supporting the still-current system of floating exchange rates, where the market itself determines currency values relative to each other.

As Sundeep Reddy put it, “You can really think of the IMF as a cross between the United Nations, which has 187 nations on it and a global financial regulator.”

The IMF classifies its activities into three categories: surveillance; lending; and technical assistance.

The IMF’s key goal is to foster economic stability and global growth in such a manner that staves off or at least mitigates the adverse impacts of economic crisis. Monitoring is the primary goal and surveillance is the manner by which the IMF collects data that it then uses to assess the appropriateness of a country’s economic policies and the likely impact on other nations. The IMF also provides policy advice aimed at crisis-prevention – a country may have sound internal economic policies but could still benefit from assistance in global macroeconomic activities, including financial regulation or the flow of capital. The IMF also plays an important role in the global response to money laundering and terrorism.

The IMF lends to countries with balance-of-payment difficulties, and in this regard it acts as the de facto global lender of last resort. The IMF has had to intervene with emergency cash injections a number of times for governments incapable of paying their bills, most recently Argentina in early 2018. Countries obtain IMF loans under significant caveats, however, under the IMF policy of conditionality. These conditions are usually in the form of either collateral or a requirement to adjust economic policy, and as a result there is considerable stigma attached to requiring bailout by the IMF associated with the loss of sovereignty.

Any nation can apply to join the IMF and 189 countries are currently on the List of Members. All IMF members are IBRD members and vice versa. Significant but not complete overlap is also found with the membership of the United Nations; only North Korea, Andorra, Liechtenstein, Monaco are UN members without being IMF members.

A Board of Governors heads the IMF, with a governor and alternate governor for each member country, which meets annually. Although officially the most significant power of the IMF is vested in the Board of Governors, in practice it delegates most of its authority to an Executive Board of 24 Executive Directors. Eight Executive Directors are fixed, with representatives from the United States, China, Germany, France, Japan, Russia, Saudi Arabia, and the United Kingdom remaining on the board permanently; the other Executive Directors serve as part of a geographical rotation. The Executive Board is led by a Chairman who also serves as Managing Director, with Christine Lagarde currently serving in this role. Since the IMF’s inception, a European has been Chairman of the Executive Board, while an American has been president of the World Bank, although this system is under some pressure for reform.

The voting share of member nations is tied to members’ financial commitments to the IMF, specifically to each member’s “quota.” The quota defines a member’s fundamental relationship with the IMF. Among other considerations, member nation’s quota determines:

The quota itself is determined through a formula based on a member nation’s relative position in the global measures of four variables: GDP, openness, variability, and reserves. A member nation’s quota is denominated in Special Drawing Rights (SDRs). SDRs are in IMF parlance a “reserve asset,” which provides members a claim on other currencies. The IMF is careful to note that the SDR is not a currency, but it is the basic unit of account for the IMF. The value of an SDR is determined daily on the basis of the exchange rates for a basket of currencies, specifically the U.S. dollar, the euro, the Chinese renminbi, Japanese yen, and pound sterling. As of October 18, 2018, $1 equaled SDR 0.717796.

In exchange for these deposits and commitments, members are credited with SDRs equal to their commitments.

The top 10 IMF members by quota follow in Table 1. Observers will note that a nation’s voting rights closely, but not perfectly, reflect its quotas. 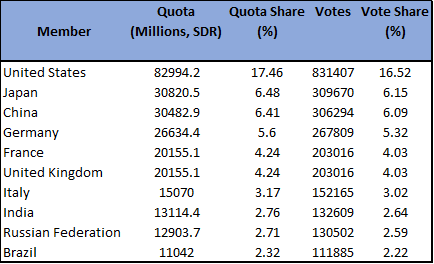 With over a 16 percent voting share, the United States is by far the largest single voting bloc. Many major decisions by the IMF require supermajorities of either 85 percent or 70 percent of its membership. For those decisions requiring 85 percent of member agreement by voting share, such as the adjustment of quotas, compulsory withdrawal of member nations (effectively expulsion), or amendments to the IMF’s Articles of Agreement, the United States enjoys effective veto power.

The Budgetary Treatment of U.S. Participation in the IMF

Since 2009, the United States has adjusted its commitment to the IMF twice. First, the United States increased its quota by an estimated $8 billion in 2009 and pledged $100 billion to the NAB. This increase was enacted in the Supplemental Appropriations Act of 2009. The Act also directed the Congressional Budget Office (CBO) to record the costs of the increased commitment on a fair-value basis. This estimating methodology requires that costs of credit programs be performed on a present value basis as set forth in the Federal Credit Reform Act (FCRA), but with a discount rate adjusted for market risk, as opposed to using a rate derived from “riskless” Treasury securities.[1]

In 2015, the United States adjusted its commitment to the IMF again, this time increasing its quota commitment by about $60 billion but reducing its commitment to the NAB by the same amount. The United States enacted this adjustment in the Consolidated Appropriations Act of 2016. Congress again directed CBO to record the change on the same present-value approach, incorporating market risk (though without specific reference to FCRA). Under this approach, the CBO estimated that the net change would cost the federal government $1.2 billion.

The Treasury Department considers U.S. commitments to the IMF less risky than does the CBO. Accordingly, the President’s Budget reflects lower subsidy costs associated with IMF commitments than CBO maintains in its baseline.

The IMF is the world’s preeminent multilateral institution for promoting stability in global financial markets. This necessary function has only been heightened in the wake of the financial crisis, and the U.S. commitment to the IMF has grown apace. With $155 billion committed to the IMF and veto authority of major policy decisions, the United States has an outsized role in the IMF’s direction going forward.