As of this week, the three major budget-writing entities in Washington have released their budget blueprints. On February 2nd, the administration released the president’s budget. This week, the House and Senate Budget Committees will hold hearings to mark-up congressional budget resolutions, with the goal of passing each chamber’s respective budget next week. Thereafter, the House and Senate will need to form a conference committee to reconcile any differences. These three budgets differ in varying ways, with the Congressional budget showing stark contrast with the budget proposed by the administration. 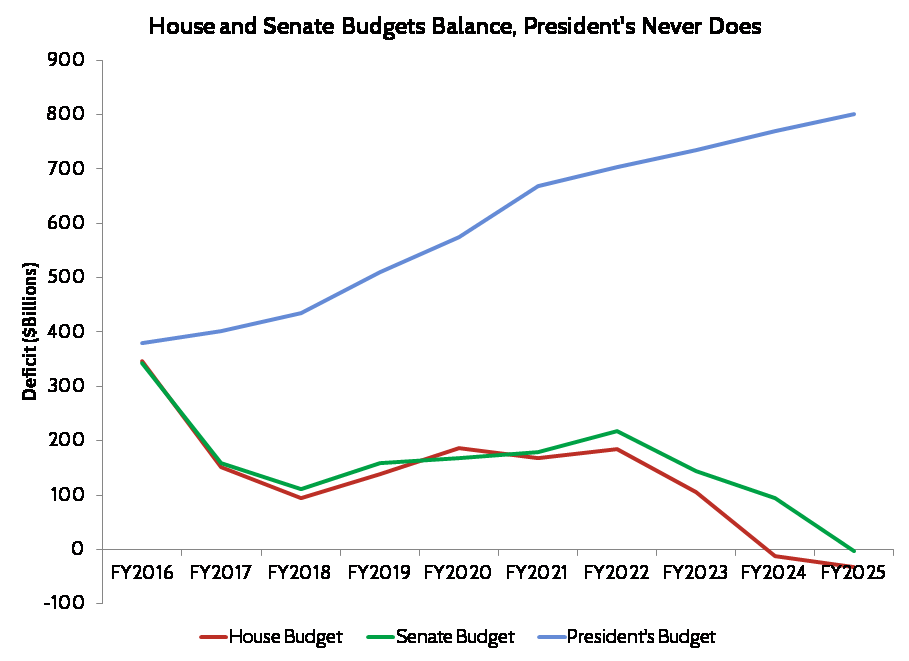 House and Senate budgets would run surpluses by the end of the 10-year budget window, of $33 billion and $3 billion, respectively. The budget released by the administration, would instead see ever increasing deficits, rising to $801 billion by 2025. 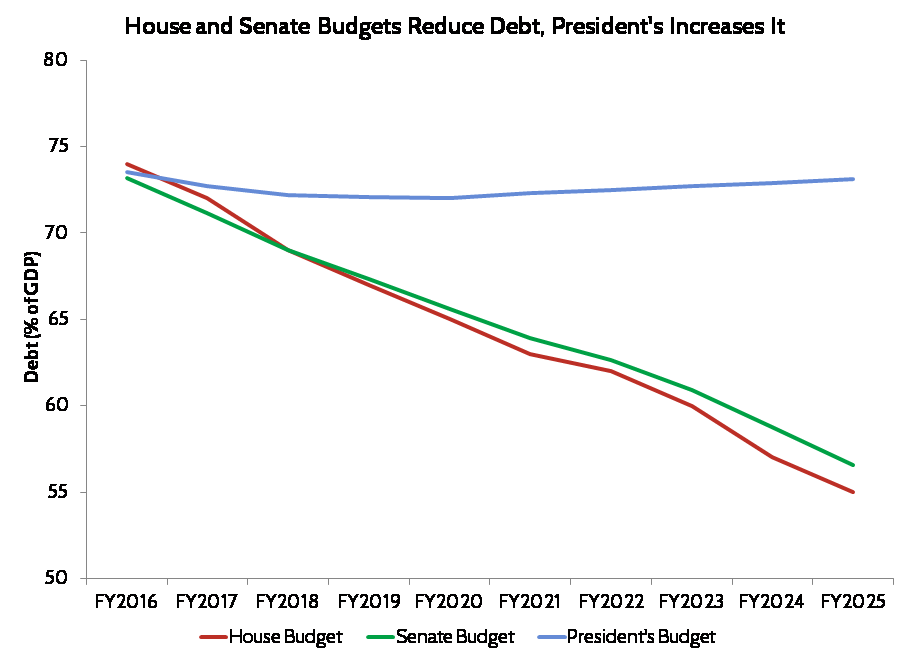 The House and Senate Budgets reduce debt as a share of GDP – down to 55 and 57 percent, respectively. The president’s budget essentially maintains historically large indebtedness as a share of the economy, and places the debt on an upward trajectory by the end of the budget window.

Both the House and the Senate budgets recognize that spending growth is driving the nation’s debt. Rather than making “draconian” cuts to spending, the House and Senate budgets slow the growth in spending programs to gradually reduce the deficit over time. Over the 10-year budget window, the House and Senate budgets save $5.5 trillion and $5.1 trillion, respectively. The president’s budget relies entirely on tax increases to reduce projected deficits, increasing taxes by nearly $1.8 trillion. With a proposed spending increase of over $500 billion, the president’s budget only saves $1.2 trillion over the next ten years compared to current law.

The House and the Senate both approach the trajectory towards balance in the same fashion: by slowing spending. While the precise policy assumptions informing those savings differ to a certain extent, they both reflect the need to largely achieve savings in mandatory savings. Beyond spending and revenue levels, the House and Senate budgets reflect several shared priorities.

Tax Reform. Both the House and the Senate budget accommodate comprehensive tax reform on a revenue neutral basis. This is an important first step in advancing a tax reform measure in both Chambers.

Trade Policy. The United States is currently in negotiations on two important regional trade agreements, the Trans-Pacific Partnership (TPP) with the Asia- Pacific region and the Transatlantic Trade and Investment Partnership (T-TIP) with the European Union. Concluding these negotiations would have a positive effect on economic growth. Both the House and Senate budget resolutions include reserve funds to accommodate implementation of these agreements.

Highway Trust Fund. Authority for expenditures from the highway trust fund (HTF) expires at the end of May. Moreover, the Congress has repeatedly authorized spending on highway and transit projects well in excess of Trust Fund receipts. Accordingly, the HTF will exhaust its capacity to meet obligations in FY2015. Both the House and Senate budgets contain reserve funds that accommodate fiscally sound approaches to restore funding to the Highway Trust Fund.

Defense Funding. The House and Senate Budget resolutions differ in their treatment of defense spending. The House resolution maintains the level of base defense funding for FY2016, but provides $387 billion above current law over the 10-year window. The Senate budget resolution adheres to current law. The chambers also provide different treatment of overseas contingency operations (OCO) funding. The House budget would provide up to $94 billion in FY2016 (though any amount above $73.5 billion would have to be offset) – $36 billion above the president’s request. Beyond FY2016, the House budget reflects the president’s request for OCO funding. The Senate provides for OCO funding at the level of the president’s request, and creates a point of order limiting OCO to no more than that level in FY2016. Notwithstanding these differences, the House and Senate budget resolution also include a reserve fund that would allow for a higher base defense funding level, provided the additional funding is otherwise offset.

Disability Insurance. The Social Security Disability Insurance (DI) program is projected to become exhausted in 2016, prompting an automatic 20 percent reduction in beneficiary payments. The House budget resolution contemplates the need to address this pending shortfall, with a rule that would make it out of order in the House or Senate to consider a measure that would worsen the outlook for the Social Security retirement program, such as bill that would reallocate Social Security tax payments to the DI fund. This rule would be waived if the bill improves the long-term solvency of the program as a whole. The Senate budget is silent on this issue.

Medicare.  The House and Senate budget resolutions both achieve significant savings from Medicare. However, each chamber achieves these savings differently. The House assumes the adoption, as in previous budgets, of a premium support program in 2024 that would provide private sector insurance for future seniors. The Senate budget resolution takes an alternative approach, by assuming the savings claimed in the president’s budget as a goal, without endorsing the underlying policies.