What are the Department of Education’s Regulatory Burdens?

Less than $1 million for regulatory compliance, or at least that’s what the Department of Education (ED) would have many Americans believe. The truth is obviously far higher. According to American Action Forum (AAF) arithmetic, ED’s regulatory burden easily exceeds $3 billion annually. The government figure is further put to shame when one considers that a single private university in Tennessee, Vanderbilt, spent $150 million in regulatory compliance in 2013.

Currently, ED imposes an astounding 93.9 million paperwork burden hours across all levels of the agency. This is the time that students, parents, colleges, and universities must spend complying with federal reporting and recordkeeping compliance. If that figure appears high, it’s because it is. In 2006, ED imposed a mere 43.4 million hours of paperwork, and even in 2009, that figure stood at 63.6 million. Still, the administration, relative to 2006, has more than doubled the amount of education-related paperwork in the U.S. The chart below details the rapid growth. 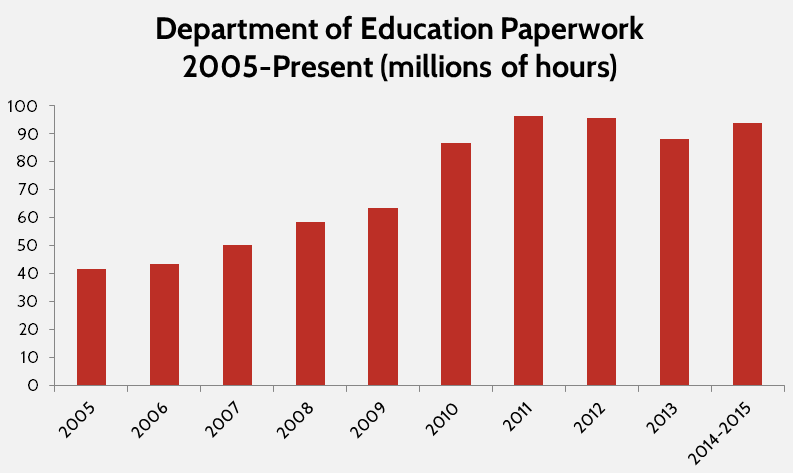 What’s driving these burdens? The top five most burdensome paperwork collections impose more than 50 million hours. Incredibly, none of these paperwork collections list a possible cost for all of the time it takes Americans to complete the federal forms. For perspective, it took seven million hours to build the Empire State Building. These five collections alone are a seven-fold increase over the time it took to build the Empire State Building, but ED reports no cost for these measures.

The chart below details the largest ED paperwork burdens, with the incredibly complex “Free Application for Federal Student Aid (FAFSA)” leading the way, mainly because there are more than 40 million applications filed annually. Because the administration has refused to monetize these burdens, AAF applied a central figure for the average hourly wage of a federal compliance officer: $32.69.

Applying the figure of $32.69 per hour instead of $0, as ED does, yields more than $1.6 billion in compliance costs for just these five collections. Looking to all of ED paperwork, more than 93.9 million hours, AAF finds $3.07 billion in total costs from reporting and recordkeeping compliance alone. However, there are many reasons to suggest actual costs are higher and the burdens are greater.

In 2011, the ED finalized a new set of rules that colleges and university administrators claim are severely burdensome. The program integrity rules focused on 14 topic areas, but two significant concerns are changes to guidelines regarding gainful employment, and changes in the definition of credit hours.

For example, last year the administration finalized a second version of its “Gainful Employment” rule, which targets for-profit universities with the loss of Title IV funding; it imposes $4.3 billion in total costs, with $433 million in annual costs. Overall, according to AAF’s Reg Rodeo database, ED has imposed more than $4.5 billion in total costs, so that $3 billion figure represents only the paperwork burdens. Gainful Employment is the most expensive measure ED has finalized since 2007 and the required paperwork is the third most burdensome collection within the agency. At 6.8 million hours, it would take more than 3,400 individuals working full-time for a year to complete the required Gainful Employment paperwork. The rule has been a huge driver in the explosive growth of education paperwork over the past few years.

The costs are not the only burdens. The private-sector institutions that the Gainful Employment rule targets serve a greater proportion of disadvantaged students than other schools. As the career college association points out, ED has admitted that its new rule will force fully one-third of the programs serving hundreds of thousands of students to close. The programs that survive will not have the capacity to serve the many displaced students. Indeed, ED estimates that “about 32 percent” of students whose programs are deemed failing will not have nearby transfer options. The unintended consequences of such erroneous actions are counterproductive to the goal of insuring more low-income students have access to higher education.

Also included in the program integrity rules is a narrow definition of credit hour that has forced some post-secondary institutions to alter the delivery of academic content in order to meet the simple accounting focus of the credit hour. As Sylvia Manning, former president of the Higher Learning Commission testified to the House Committee on Education and Labor in 2010, “A narrow definition of credit hour would not be particularly useful in measuring the learning outcomes of adult students or alternative delivery systems. It would deter innovation in higher education and require that colleges and universities divert resources away from helping students to demonstrating compliance with the regulation.”

Over the last several years, there have been substantial innovations in higher education: accelerated classes, distance learning, open-online course offerings and hybrid format classes have provided access to educational opportunity and attainment for new groups of students. The restrictive definition of credit hour discourages the kind of innovation that enables colleges and universities to better serve students. Moreover, the definition fails to effectively measure or improve academic rigor, program quality, or learning outcomes.

Nothing. That’s what ED portrays as the cost for its most burdensome paperwork requirements. The reality is closer to $3 billion and even that excludes the secondary costs of some of the agency’s most burdensome rules. With record-high levels of red tape, it appears that the agency is doing little to help struggling students and universities who must labor under regulations daily. Thankfully, the U.S. Senate has issued a report that might ignite a reform effort to streamline reporting requirements and tame the regulatory state.