2014: Year of Action, Year of Regulation

President Obama’s pen and phone imposed $181.5 billion in regulatory costs during 2014, including proposed and final rules. In 79,066 pages of regulation, Americans will feel higher energy bills, more expensive consumer goods, and fewer employment opportunities. The year was highlighted by EPA’s proposed “Clean Power Plan” (CPP), which the administration admitted would raise electricity prices by more than six percent by 2020, not to mention the $8.8 billion price tag. Amazingly, the CPP was not the most expensive measure in 2014. EPA’s proposed ozone rule, which could force dozens of state and national parks into non-attainment, could impose $15 billion in costs.

AAF has data on costs, benefits, and paperwork burdens for all rulemakings published in the Federal Register from 2008 to present. Every regulation that imposes a private-sector burden, intergovernmental cost, or paperwork burden is recorded and tracked throughout the rulemaking process. Data points include net present value costs, annual costs and benefits at a seven percent discount rate, and paperwork burden hours. Any quantified deregulatory measures were also included and were represented in the figures.

How does $181.5 billion in total burdens compare on a personal level?

Examining the past seven years for which AAF has data, 2014 was in the top three, with $16.9 billion in final rule annual costs. In 2012, the runaway leader, regulators managed to impose $32.7 billion in annual costs. During the President’s tenure, regulators have added approximately $95 billion in new burdens. For perspective, new tax increases from the “Fiscal Cliff” deal will total only $90 billion in fiscal years 2014 and 2015. 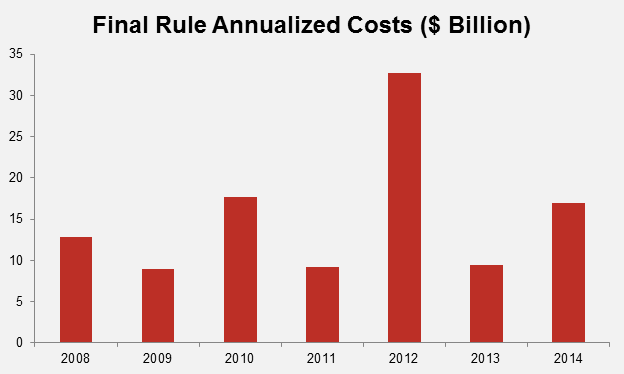 Overall in 2014, there were six regulations that could have an annual impact of more than $1 billion. More broadly, regulators published 39 rulemakings with yearly burdens of more than $100 million. Those 39 regulations also arrived with 25.6 million hours of paperwork. 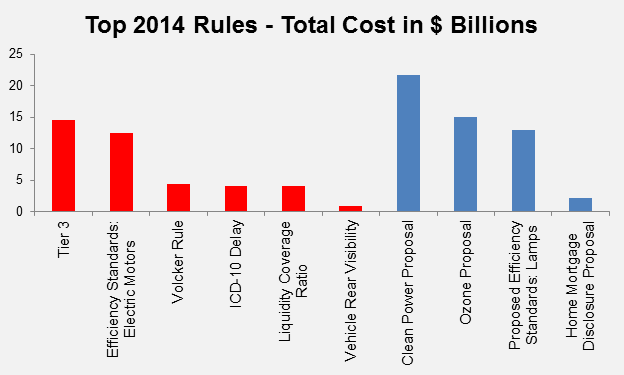 As mentioned, both of the most expensive rules were EPA measures: ozone and the CPP. However, EPA only had three of the ten priciest rulemakings in 2014. The other notable EPA rule was for Tier 3 vehicle emissions standards, which will add $1.5 billion in costs on auto manufacturers, refineries, and increase gasoline prices for consumers.

The Comptroller of the Currency (OCC) finalized two of the ten most expensive rules. Its contentious Volcker rule (jointly issued by the Federal Reserve, the Securities and Exchange Commission, and the Federal Deposit Insurance Corporation) was officially published early in the year and will cost more than $4 billion annually. OCC also finalized a rule governing “Liquidity Coverage Ratios,” which will cost roughly $3.6 billion.

The Department of Energy (DOE) was an aggressive regulator in 2014 as well, with two of the ten most expensive rules: energy conservation standards for fluorescent lamps and industrial electric motors, both of which would lead to considerable initial price increases for consumers. Overall, DOE published 14 regulations with quantified costs. The results: $3.6 billion in annual burdens, and amazingly, $67.5 billion in net present value costs, more than any other agency. Yet, DOE rarely receives the same level of coverage as EPA or other controversial regulators.

Rounding out the top ten, the Department of Transportation finalized the long-delayed rule for rear-view vehicle visibility. The measure would require rear-view cameras for new cars in an effort to prevent rollover accidents; it would cost $924 million annually and generate $595 million in benefits. Finally, the Consumer Financial Protection Bureau (CFPB) proposed new rules for home mortgage disclosures, estimated at $527 million annually.

The highlights of ACA regulation were the final calorie labeling rules for restaurants and vending machines. Combined, the measures will impose more than $1.6 billion in costs and two million paperwork burden hours. The vending machine rule will overwhelmingly affect small businesses and the rule for restaurants is guaranteed to raise food prices for consumers. As the administration conceded, “We fully expect that some proportion of the costs imposed by the regulation will be passed on to consumers.” The new ACA burdens in 2014 have pushed the total costs of the law to $41.3 billion, with 163 million paperwork burden hours.

For Dodd-Frank, the largest rule was not Volcker, but OCC’s Capital Requirements for Covered Swap Entities. By requiring banks to hold additional capital reserves, the measure will result in $5.2 billion in lost opportunity costs and 24,000 paperwork hours. The OCC’s Liquidity Coverage Ratio was the other large notable rule in 2014. According to the analysis, the rule only affects 20 institutions, but it will nevertheless impose $4 billion in costs. These new Dodd-Frank burdens pushed the total costs of the law to $32.9 billion and more than 63.7 million burden hours. 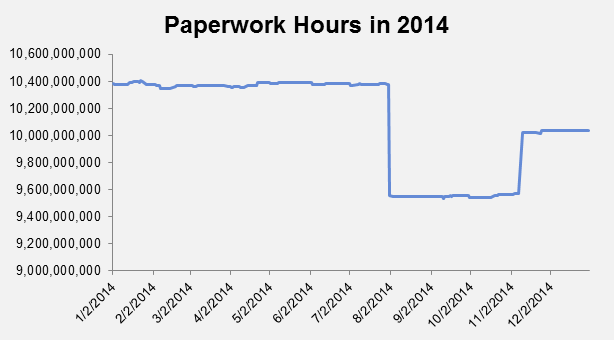 The huge drop in the chart on August 1 was not the result of a sustained effort to alleviate regulatory burdens, but the expiration of an 800 million hour tax form. In November, the administration quickly approved another IRS collection, pushing the cumulative burden above 10 billion hours again. Once the administration concludes review of this regulation, paperwork will doubtlessly increase far past 10 billion hours.

The chart below displays the specific paperwork requirements that were approved or discontinued in 2014. On January 1, there were 9,252 requirements and by the end of the year, this ballooned to 9,301. 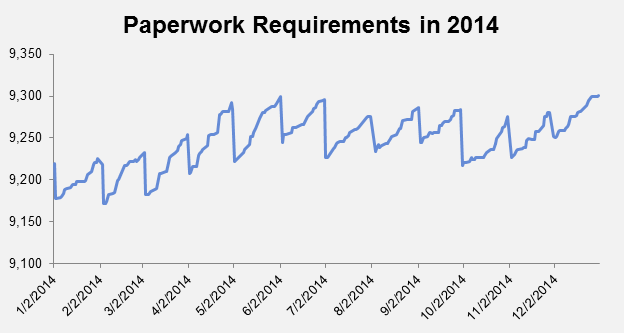 With the help from DOE and EPA, regulators published $143 billion in benefits. DOE published $13.5 billion and EPA added $122 billion, the lion’s share of the total. Of the 607 rulemakings that AAF tracked, only 55 managed to quantify benefits.

Regulators were also busy cutting costs and paperwork burdens in 2014. On an annual basis, there were more than $3 billion in cuts and 77.6 million hours of associated paperwork reductions. The deregulatory leader was the Department of Transportation’s (DOT) measure to reduce more than 46 million hours of paperwork on truckers, saving the industry $1.7 billion annually.

In addition to cataloguing which agency imposes regulatory burdens, AAF tracks where regulations are codified in the Code of Federal Regulations. This will give a picture of which industries or what parts of government are affected by new regulations. The graph below details burdens on affected industries by costs and paperwork burdens. 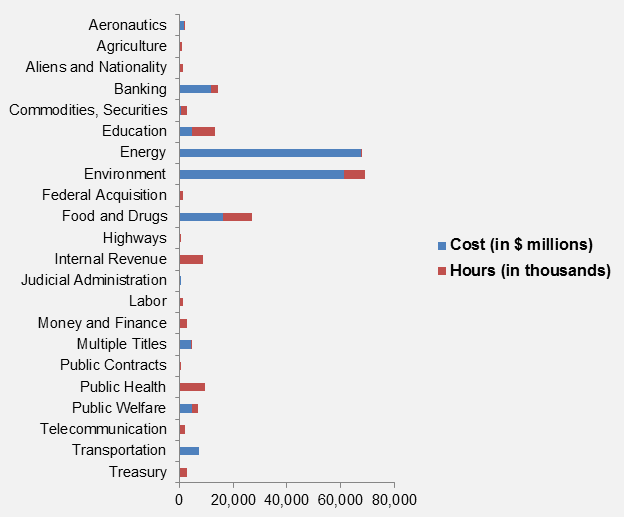 It’s clear from the graph above that environment and energy are the runaway cost leaders. In what may be a surprise to some, new energy efficiency standards on the manufacturing industry actually added more burdens than environmental regulations. In terms of costs alone, energy topped environmental: $67.5 billion to $61.2 billion. However, a vast majority of these overall burdens will affect the manufacturing industry.

The map below represents the cost distribution of the largest final rules in 2014. Regulators targeted industries in California ($7.9 billion), Texas ($6.5 billion), and Ohio ($3.4 billion) more than any other state.

The Year of Action lived up to President Obama’s promises. He wasn’t able to pass cap-and-trade legislation, so now EPA is proposing a measure that will add $8.8 billion in annual burdens to achieve the same end. DOE’s unheralded actions on efficiency will generate more than $67 billion in long-term burdens. The high level of proposed rule costs ($102 billion) likely means that 2015 will be yet another year of action.

What do these huge sums mean for individuals? Higher energy prices, pricier household goods, a more expensive mortgage, and the promise of yet another year of unrelenting regulatory growth. No one can accuse the President of abandoning his promises on regulation in 2014.