According to the Environmental Protection Agency’s (EPA) own estimates, its proposed power plant regulation could eliminate one-fifth of existing coal generation facilities and 80,000 energy jobs. The regulation, set for final publication this summer, would regulate emissions at existing coal and natural gas power plants, while also ensuring that consumers use less energy from coal facilities. Based on American Action Forum (AAF) research, this means that more than 90 coal-fired power plants could be retired across the country. Secondary employment impacts suggest that EPA’s power plant regulation could eliminate 296,000 jobs, about the population of Cincinnati, Ohio and more than the total number of jobs the economy created in February 2015.

Buried in one of EPA’s technical support documents, among more than 1,600 other supporting documents for the proposed rule, the administration detailed the economic implications of complying with building blocks one (heat rate improvements at coal plants) and two (increased natural gas dispatch rates and decreased coal usage). EPA estimated one-fifth of existing coal could be retired, around 49 gigawatts (GW) of power, and the coal industry could lose upwards of 80,000 jobs.

Below is a map of facilities most susceptible to closure because of EPA’s proposed power plant regulation.

EPA predicts that if states adopt only options one and two of the administration’s plan for power plants, 80,000 energy industry jobs will be lost to EPA climate regulations.

For perspective, 80,000 jobs is larger than the population of Napa, CA. But this is only the first part of the story. EPA never quantifies the secondary employment effects of these lost jobs. A 2009 PricewaterhouseCoopers study found that one energy job supports 3.7 additional jobs. Using a jobs multiplier of 3.7, applied to the 80,000 lost jobs that EPA concedes, yields about 296,000 lost jobs across the U.S.

To put the figure of 296,000 lost jobs in context, the average annual pay in the “fossil fuel electric power generation” industry is $103,645 and the average coal mining salary is $82,068. This means that by 2030, the economy could lose $27.7 billion in wages, larger than the GDP of Jamaica. However, nowhere in EPA’s Regulatory Impact Analysis (RIA) do they monetize the loss of these jobs or wages.

Professors Jonathan Masur and Eric Posner of the University of Chicago have devised a central figure of the costs of a lost job: $100,000. Using this data point, the broader economic implications of 296,000 lost jobs become bleak. The employment costs could eclipse $29.6 billion. That figure alone would make it one of the costliest regulations of all time, but it is absent from EPA’s RIA because agencies typically refuse to incorporate employment projections with regulatory analysis.

Below is a snapshot of how EPA anticipates these jobs will be lost throughout the energy industry. 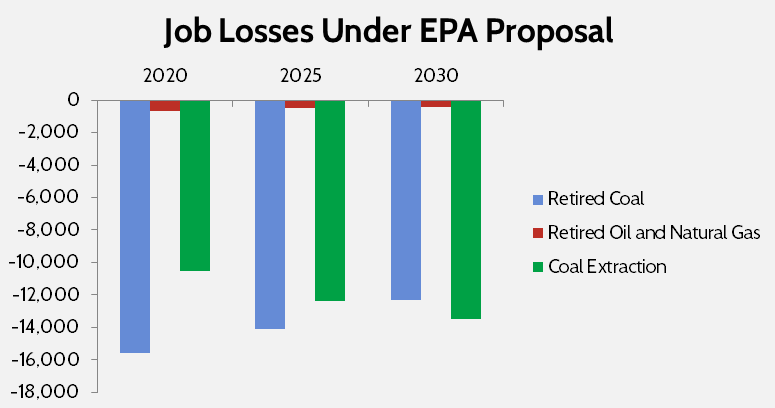 AAF determined how job losses are distributed across states. Jobs lost through coal and oil and natural gas retirements were allocated according to which states will see the most generation losses because of the proposed EPA climate regulations. EPA provided estimates of historic energy generation and how coal and oil and gas facilities will be redispatched or retired under the rule. Jobs lost in coal extraction were allocated among states according to coal employment data from the Bureau of Labor Statistics.

The distribution of these 296,000 lost jobs is not evenly scattered throughout the United States.

The redispatch or retirement of coal facilities falls heavily on a small number of states that the EPA will hold to more strict compliance goals. For example, Georgia is expected to lose 13.7 terawatt hours of coal through redispatch or retirement. This represents about 3.6 percent of the total lost coal in the U.S. Thus, Georgia’s share is roughly 5,909 fewer jobs. Losses in oil and gas generation are significantly smaller, but fall disproportionately by generation losses. California will lose 10.4 terawatt hours of oil and gas steam generation, amounting to 956 lost jobs.

It is important to note that EPA anticipates that nearly half of all coal extraction jobs will be lost. Of the 76,000 jobs in coal extraction today, EPA climate regulation is anticipated to eliminate 36,400 by 2030.

The following map displays how many jobs each state could lose as result of redispatch, retirement, and lost coal extraction employment.

It’s no surprise that EPA’s greenhouse gas rule will eliminate tens of thousands of jobs in the energy sector; the agency admits the rule will cause steep jobs cuts, up to one-fifth of coal generation. But that’s not the entire story. The 80,000 in possible job losses could easily translate into more than 296,000 jobs throughout the economy and $29 billion in employment costs. EPA might tout the benefits of its proposal, but the significant job losses are just as noteworthy.