Recently, policymakers and regulators have enacted an abundance of laws and regulations affecting labor policy, including raising the minimum wage, expanding overtime pay coverage, and attempting to change the legal definition of “joint employer.” Interestingly, franchised businesses seem to bear a considerable amount of the burden from these new rules. One of the key sources of private sector job growth in the nation, franchises employed 7.1 percent of private industry workers in 2014, and created 10.8 percent of all jobs added last year. Moreover, franchises have been central to job creation for automobile dealers, restaurants, and accommodation services since 2012. This report examines the role of franchises in today’s economy and provides an analysis of associated regulations.

The franchise business model has been among the most dependable sources of new jobs over the last few years. According to the payroll processing firm ADP, franchises employ more than 8.4 million workers, representing 7.1 percent of private sector workers.[1] While the most common type of franchise businesses are restaurants or fast-food chains, the franchise model has taken hold in several industries. Workers are employed by franchise supermarkets, gasoline and auto repair stores, drug stores, real estate services, and even professional and scientific technical services. The three industries that most frequently employ the franchise model are automobile dealers, restaurants, and accommodation services.

During the past few years, franchise industries have been a central source of job creation. Looking at the entire economy, ADP data suggest that private sector job creation has not been accelerating. As illustrated in table 1, from 2012 to 2014, private sector employment levels grew 2.0 percent to 2.2 percent each year. While growing steady, the lack of acceleration is worrisome.

Figure 1 illustrates the jobs created by all automobile dealers and just their franchises over the past few years. 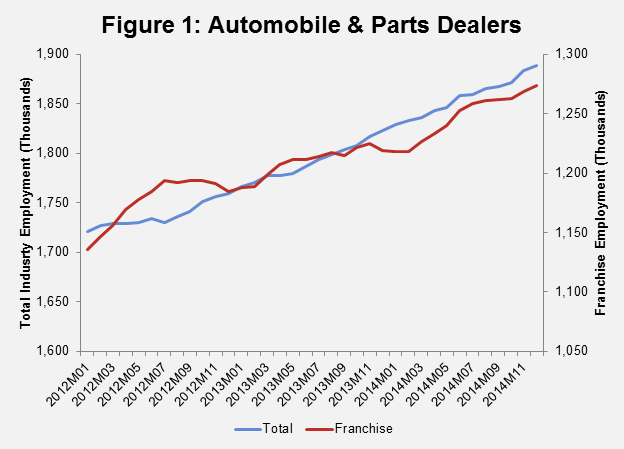 At the end of last year, 67.4 percent of those employed by the automobile dealer industry worked for a franchise. BLS data reveal that from 2012 to 2014, that industry grew far more rapidly than the entire private sector. As table 2 reveals, employment in automobile dealers grew 2.5 percent to 3.6 percent each year during that time. Meanwhile, franchise employment within that industry grew even more rapidly, indicating that franchises drove that growth.

ADP data reveal that from 2012 to 2014, franchise employment in automobile dealers grew 2.9 percent to 4.5 percent annually. As a result, last year 83.8 percent of all automobile dealer jobs added were created by franchises.

Figure 2 reveals that the high rate of employment growth in the restaurant industry was driven by job growth in that industry’s franchises.

Finally, figure 3 demonstrates the employment growth that occurred in the accommodation industry. 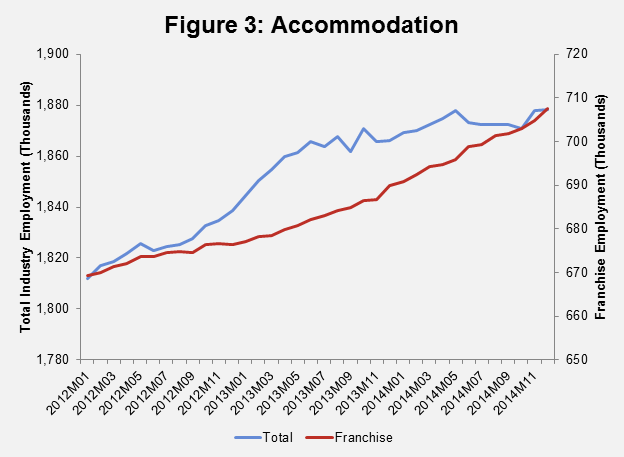 At the end of last year, 37.5 percent of accommodation employees worked for a franchise. In this industry, the evidence suggests that franchise businesses have perhaps been the only source of stable job growth.

Contrary to the typical American dream, mobility has been lacking in the United States over the past few decades, particularly for those at the extreme ends of the income distribution. According to researchers at the Federal Reserve Bank of Richmond, 33.5 percent of those born in the bottom quintile stay there, but 7.4 percent reach the top quintile. Meanwhile, 37.8 percent of those born in the top quintile stay there and only 10.9 percent fall to the bottom.[4]

To make matters worse, a 2014 paper in the American Economic Review provides evidence that economic mobility has been stagnant over the past several decades. Specifically, the researchers found that since 1970, the probability that someone born in the bottom quintile reaches the top has been stable at 8 to 9 percent.[5]  While the authors aimed to dispel the myth that mobility has worsened in America, the fact that it has not improved is still worrisome.

According to the researchers at the Federal Reserve Bank of Richmond, for most people to increase the value of their labor income, they must acquire greater skills. They suggest that investment in college and early childhood education could improve the chances of more people in the bottom of the income distribution being able to move up the ladder.[6] However, another way to increase labor skills is simply on the job experience, which franchises provide to many employees. Franchise businesses often hire young and uneducated workers, giving them direct experience and skills that can translate into increased incomes in the future. For instance, 28.1 percent of all workers aged 16 to 24 were employed by leisure and hospitality businesses, such as restaurants and hotels that are frequently franchises.[7] However, if the persistent enactment of laws and regulations that burden franchises continues, then it is likely that those opportunities will not be as frequently available.

In 1986, President Ronald Reagan quipped, “Government’s view of the economy could be summed up in a few short phrases. If it moves, tax it. If it keeps moving, regulate it.” Over the last few years, the franchise model has been substantially impacted by laws and regulators. Franchises are facing a slew of new minimum wage laws, overtime pay rules, and “joint employer” standards. Combined, these laws and regulations pose a risk to an industry that employs 8.4 million Americans and created 38,000 jobs in December. The following regulations pose a unique threat to the franchise business model.

Recognizing that franchises are a potential source of new union employees and additional legal liability, the federal government initially just targeted specific industries. In 2013, the Department of Labor (DOL) imposed additional wage controls and overtime rules on home health “domestic service” employees, who are routinely employed by third parties and franchises. The rule, designed to protect domestic service employees, will actually “disemploy” thousands of them every year. According to the agency’s math, the measure will force 1,531 home health care providers out of work annually. The rule also contributed to deadweight losses because consumers “must now pay more to receive the same hours of service.”

Despite the costs, lost employment, and regulatory hurdles, the administration moved forward with the regulation. DOL did specifically mention AFSCME and SEIU support for their rulemaking. “Comments from labor organizations, non-profits and civil rights organizations, and worker advocacy groups generally supported the proposal.”

Since President Obama proposed increasing the minimum wage in his 2013 State of the Union Address, lawmakers and labor activists have worked to enact laws and rules to raise federal, state, and local minimum wages. These laws hit franchise-heavy industries, such as restaurants and hotels, particularly hard since they frequently employ low-skilled workers. Despite no increase in the federal minimum wage, several states have increased the minimum wage and the president used his executive authority for federal contractors. In 2014, President Obama issued an executive order to raise the minimum wage of all federal government contractors to $10.10 per hour. Meanwhile, 21 states began the year by increasing their minimum wage. Three other states and Washington, DC are slated to increase their minimum wage later this year. While many hope these laws will help low-wage workers, research consistently shows that the exact opposite is true.

In March 2014, President Obama directed DOL to issue new regulations that update existing overtime standards. Under the current rule, all wage and salary workers are entitled to time-and-a-half overtime pay for working over 40 hours per week. However, many workers can be exempt from the rule if they are classified as an executive, administrative, or professional employee. Regulations require that the exempt employee must earn a salary of at least $455 per week and the employee’s duties must match their exemption classification. Under President Obama’s order, however, the DOL will adjust the exemption requirements and likely raise the minimum salary needed to classify an employee as exempt from overtime pay. Intriguingly, the White House specifically cited “a convenience store manager or a fast food shift supervisor,” as beneficiaries of this new rule, many of whom work for a franchise. AAF found, however, that this rule change will likely be a dismal tool to boost earnings among low income workers.

Among all of the policy changes affecting franchises, none threaten to do more harm to the industry than the National Labor Relations Board’s (NLRB) joint employer decision. Today, NLRB stands ready to fundamentally alter the legal definition of “joint employer” as it applies to franchises. This would leave the franchise business model subject to more lawsuits and aggressive union campaigns. Since 1984, NLRB has held a firm as a joint employer only if it exercised direct control of employees in another business. For example, hiring, firing, and supervision constituted direct control. This is not the case in franchise models, as all these tasks are left to the independent franchisee owner, not the franchisor. Even before the 1980s, NLRB has long established that franchisors are not joint employers because all interactions with franchisees are aimed to preserve the franchise brand, not to tell franchisees how to manage their workers.

This regulatory campaign will not end with McDonald’s. NLRB is currently considering a case known as “Browning-Ferris,” which could formally upend the generation-old franchise business model. Thankfully, some courts have already stepped in to halt this movement. In January, U.S. District Court Judge Roger Benitez found that the parent franchisor lacked direct control over the day-to-day operations of the franchisee and that there was no evidence that the franchisor controlled work schedules and direct pay. It was an initial legal success for franchises, but it is unclear if the NLRB will still move to implement the rule.

With labor force participation rates at record lows, there are only a few bright spots in today’s economy. Where growth is strong, in franchises, job creators are unfortunately uniquely burdened by recent regulatory efforts. The rising cost of doing business and additional legal liability pose a threat, particularly when outdated regulations remain on the books, unamended. It’s left to the courts and Congress, to stem the tide of new rules.