Last January, the Affordable Care Act (ACA) implemented a new market for individual health insurance, characterized by strict regulations on benefits, age-limited state-wide pricing regimens, and subsidies for low to upper-middle income households. Rather than make health insurance more affordable, these regulations initially caused a precipitous increase in premiums exceeding 50 percent in some areas, as low-cost options were deemed substandard. The Obama Administration originally maintained the ACA would reduce premiums and continues to claim that subsequent year-over-year premium increases will be considerably lower than historical averages.[1] In this report, we examine that claim and other ways the new exchanges have evolved in the second year.

The primary sources of data for this report are the 2014 and 2015 individual market medical insurance landscape files that are maintained by the Center for Medicare and Medicaid Services (CMS).[2] These landscape files contain detailed information on health insurance plans offered through the federally-facilitated or federal-state partnership exchanges, which include 36 states in 2014 and 37 states in 2015—only 35 states in both datasets. (Idaho is an entirely state-based exchange as of 2015, and Oregon and Nevada moved into the federal system.)

Breakaway Policy and the Robert Wood Johnson Foundation maintain a dataset on Silver plans offered in all states in 2014, which we use to calculate premiums for 2014 benchmark Silver plans in non-federal exchange states.[3] In order to obtain information on 2015 silver plans that were not included in the data available through CMS, we use plan compare tools on state-based exchanges where they are available. Overall, we analyze data on 2014 and 2015 Silver plans for 43 states, which account for 461 of the 501 rating areas nationwide. Our estimates on the number of health insurance issuers in a given rating area are also based on Silver plan data.

In computing average effects across rating areas, we calculate a weighted average of the effects in each rating area using the potentially eligible population. The potentially eligible population is defined as the number of individuals who are either uninsured or insured through the individual market, ineligible for Medicaid or the Children’s Health Insurance Program, and determined to be a legal resident. We estimate this population using the 2010-2012 American Community Survey.

All of the premium estimates in this report are based on those offered to a 27 year old non-smoker. Unless otherwise noted, the premium changes do not include any subsidies that are available for middle-to-low income households. In our analysis of subsidized 2014 benchmark plans, we consider the post-subsidy premium for a 27 year old non-smoker that earns $30,000 per year. Where we consider the implications for families, we calculate the premium for a married couple of 27 year olds with two children. We also use both the 2014 income contribution scale and 2014 federal poverty guidelines for calculating both the 2014 and 2015 premium subsidy. This is a simplification that ignores a slight increase in both the federal poverty guidelines and the income contribution scale that roughly offset each other in terms of the overall effect on the premium subsidy for an individual whose income does not change. More importantly, we assume that household income remains the same. An estimate that included some increase in income would lead to a reduction in premium subsidy.

In the early years of the new individual health insurance market, it will be hard to identify the underlying growth in the cost of health insurance. The risk protections guaranteed by the ACA, the growing pool of insured, and the settling product landscape all cause premiums to change in ways that are largely disconnected from growth in the actual cost of providing health insurance. For example, the premium of the second-lowest cost Silver plan, referred to as the benchmark Silver plan, is an average of 1.6 percent greater than in 2014. However, many of those plans have changed. The benchmark plans in 2014 that are still offered in 2015 have increased by an average 5.8 percent—roughly $480 per year for a family of four—which is likely much closer to underlying premium growth.

It would be a mistake to accept 5 percent year-over-year premium increases as an indication of success. Premium increases this year follow a large increase in premiums—on the order of 50 percent nationwide—between 2013 and 2014, especially concentrated among more affordable plans.[4] And as health care costs begin to rise over the next decade, these increases may return to the 8 to 12 percent increases that plagued the individual market prior to 2014.[5]

Average rate increases mask significant variation across the country, which is divided into 501 distinct rating areas. We estimate that the price of the lowest cost Bronze plan—the cheapest metal level available through the exchange—has increased by 3.4 percent. While the lowest cost Bronze plan in 2015 is at least 5 percent less expensive than last year in 97 out of the 407 rating areas for which we have Bronze plan data, premiums are at least 10 percent more expensive in 116 rating areas. National variation in benchmark premiums is similarly wide, with 30 percent decreases in some areas and 30 percent increases in others.

Other federal health care programs designed around subsidized private insurance—such as Medicare Advantage and Medicare Part D—show that competition among insurance companies is an important tool in controlling price. In its first year of open enrollment, research showed that a lack of competition was correlated with higher premiums and $1.7 billion in higher subsidy spending.[6]  Now in the second iteration, competition continues to have an impact on premiums and plan offerings. 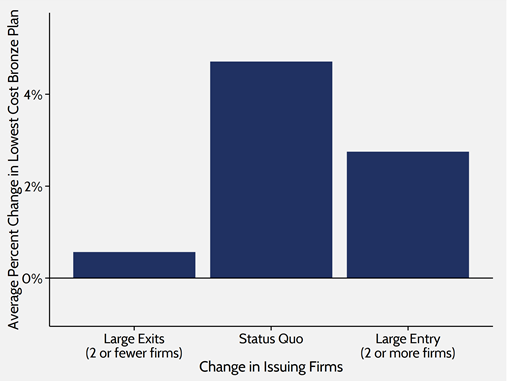 The slow growth in the lowest cost plans has prompted many analysts and administration officials to encourage households to re-enter the exchange this open enrollment season and shop for a new, cheaper plan. If a household fails to act, it will be automatically re-enrolled in the same plan as last year—or a closely related plan if that one is no longer available. As an example, we examine the premium changes for households that purchased the benchmark plan in 2014. Approximately 14 percent of 2014 enrollees purchased a 2014 benchmark plan, many of which no longer the second-lowest cost Silver plan.[7] This churn in the benchmark plan is especially problematic because it affects both the household subsidy and the overall insurance premium.

Some analysts have applauded the ACA for this year’s lower average premium increases, but the wide geographic variation indicates that average premium movement is not very informative. The main take-away from the 2015 premium data is that the new market is still settling. There is significant new entry from both established health insurance companies and smaller, local insurers, and the premiums for many plans are shifting up and down dramatically as issuers fine-tune actuarial models for the market. It may take a few years before we are easily able to identify the underlying cost growth in the exchanges.

There is clear evidence that competition and new entry is helping to control prices in some rating areas. Whether the ACA can effectively promote and maintain competition across all rating areas remains to be seen. During the 2014 open enrollment period, nearly two-thirds of all enrollees selected the cheapest option in the chosen metal level, which shows that consumers are responding to aggressive price competition.

However, the combination of price competition, a complex subsidy calculation method, and high turnover leads to a significant amount of uncertainty that is detrimental to a stable market for long-term consumers. In the employer sponsored market, enrollees are able to pick a health insurance plan and expect modest year-over-year premium increases in the neighborhood of 6 percent.[9] Since enrollees in employer sponsored insurance do not need to constantly shop for cheaper options, they are able to rely on a consistent physician network and predictable benefits. This too was the ACA’s goal for a stable individual market, but the churn in benchmark plans and a complex subsidy calculation indicate that there remains significant room for improvement.

[1] Council of Economic Advisors, “Trends in Health Care Cost Growth and the Role of the Affordable Care Act,” November 2013

[2] The individual market medical landscape files are available for download at data.healthcare.gov