Bakken Region Prospers from Oil Boom, Even the Environment Benefits

For the past several years, new techniques to extract oil and natural gas have led to surging production across the U.S., including the Bakken shale formation in North Dakota and parts of eastern Montana. The graph below charts the incredible growth in the region’s production, measured in millions of barrels per day.

As the data reveal, the Bakken region has increased output from 0.08 million barrels per day in January 2008, to 1.16 million by August 2015, a 14.5-fold uptick. During this time, the nation as a whole has also witnessed incredible growth in output. The graph below details U.S. oil production from 2008 to 2014, measured in thousands of barrels a day. 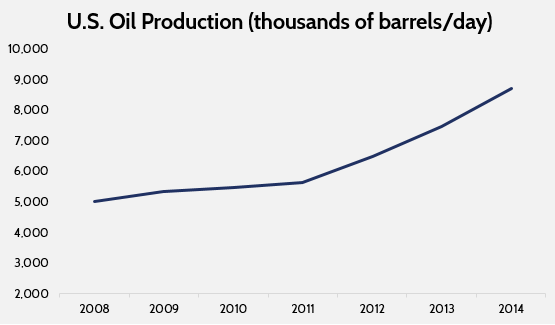 Although the Bakken gains have been more pronounced, as shown above, the U.S. has still increased production by 74 percent, from just over five million barrels a day to more than 8.7 million in 2014. This expansion has helped to drive down gas prices for consumers at the pump and contributed to the realistic possibility of U.S. energy independence for the first time in more than a generation. However, as noted, this growth has increased cries that the fracking and oil boom has led to declining environmental quality. The data reveal these claims as mostly hollow.

EPA labels air quality on a given day by the following: “good,” “moderate,” “unhealthy for sensitive groups,” “unhealthy,” “very unhealthy,” and “hazardous.” As AAF examined earlier this year, air quality is generally improving across the U.S. and the Bakken has enjoyed cleaner air as well. EPA generally defines “good” air days as the following: “air pollution poses little or no risk.” In the Bakken region, despite the oil production boom, more than 90 percent of year is labeled “good” by EPA. See the graph below: 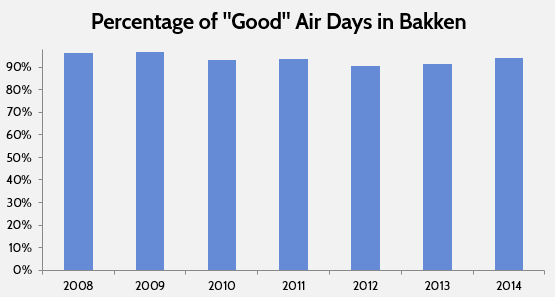 Throughout the history of the oil boom in the Bakken, the percentage of the year with “good” air quality days has consistently stayed above 90 percent, with more than 94 percent considered “good” in 2014, a slight improvement above the 2013 figure (91 percent). The rate of “unhealthy” days in the Bakken remains low, with less than three last year, down from nine in 2012. There is actually a positive correlation (albeit, the correlation coefficient is just 0.36) between rising Bakken oil production and the overall number of “good” air quality days in the region.

Compare the Bakken’s results to upstate New York’s Marcellus region, which has banned fracking. In upstate New York, the average jurisdiction has never experienced more than 90 percent “good” air days in a year. These jurisdictions have averaged roughly 83 percent, compared to 93 percent for the Bakken. Increased oil and natural gas operations certainly don’t directly result in cleaner air, but there is little evidence in the Bakken area that production is causing poor air quality days for local residents.

Although “good” air quality days are a general indicator that the levels of environmental pollution are well within acceptable limits, AAF also examined smog in the Bakken region. EPA data tracks days throughout the year when ground-level ozone (smog) is the dominant pollutant. Even by that metric, the Bakken region has made slight improvements. The chart below tracks days in which ozone is the dominant pollutant for the average jurisdiction in the Bakken (with linear trendline). 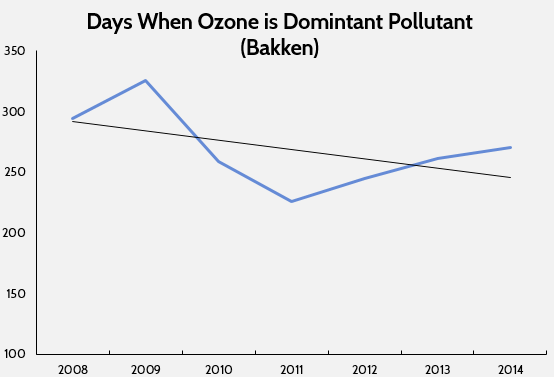 As the data reveal, smog has gradually declined as the dominant pollutant in the area. In 2008, it was the main pollutant for 294 days; that figure dropped to 270 days by 2014, a decline of eight percent. This improvement is hardly earth-shattering, but it helps to dispel any notions that oil production in the Bakken is associated with dangerous air quality.

In addition to the positive news of energy independence and strong air quality, the amount of greenhouse gas (GHG) released into atmosphere continues to decline. This, despite the renaissance in domestic energy production. The graph below track carbon dioxide emissions from 2005 to 2013. 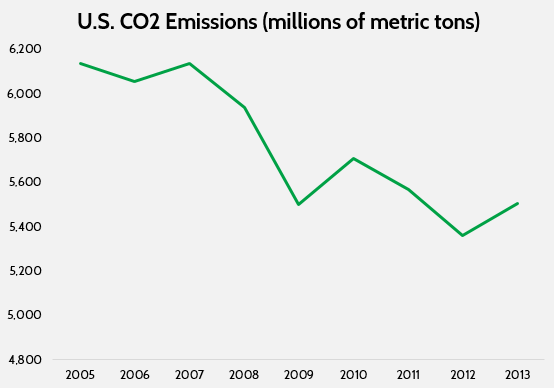 As noted above, U.S. GHG emissions have declined from six billion tons in 2005 to roughly 5.5 billion tons by 2013, a drop of nine percent. Even Montana, located partially in the Bakken region, has managed to reduce emissions nine percent during the same period. Likewise, Pennsylvania, which has drastically increased its natural gas production, has decreased carbon dioxide emissions by eleven percent from 2005 to 2013.

Energy booms are not incompatible with clean air and a strong environmental record. The Bakken region increased oil production 1,450 percent, all while maintaining “good” air quality for more than 90 percent of the year. The U.S. economy may not have to choose between energy production and environmental stewardship after all.

Incarceration and Poverty in the United States

Parsing the Reasons for Layoffs in State and Local Governments

The benefits to children from a paid family leave policy should be considered alongside the benefits to parents when analyzing a PFL policy.