Budget Reconciliation in a Divided Government 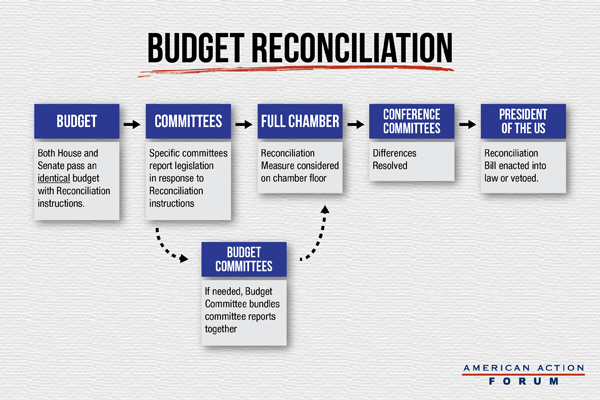 As the mid-term election nears, there has been a great deal of speculation about the policy outlook in the event that Republicans take control of the Senate. Irrespective of the political balance in Congress, President Obama will still control the executive branch for the next two years, which precludes enactment of any policy measures that run too contrary to the president’s preferences. An important parliamentary procedure, known as budget reconciliation, however could confront the president with policy measures from which a Democratically controlled Senate has largely shield him. To appreciate the role of reconciliation in a divided government, it is first important to address the institutional role of the Senate and its relationship with the executive branch.

The Rules of the Senate

The institutional role of the Senate has shielded the president from Republican electoral gains since the 2008 election. While Republicans have gained control of the House of Representatives and gained Senate seats, Senate rules have blunted, and could in part, continue to blunt Republican policy-making in Congress.

In the Senate, simple majorities typically do not prevail. Rather, unanimity or super-majorities are required to advance legislation. During initial Senate consideration of the Affordable Care Act, Democrats held 60 seats and could completely override Republican opposition. Senate passage of the Affordable Care Act, the contemporaneous increase in the debt ceiling, and a number of other measures were passed along such lines. In the wake of Scott Brown’s election, however, Democrats could no longer advance legislation along pure party lines. Rather, they relied on the reconciliation process to pass the second legislative element of the Affordable Care Act. This could inform how Republicans can advance measures to the president’s desk that might otherwise languish in the Senate.

Reconciliation in the Senate

A reconciliation bill is legislation that changes laws affecting mandatory spending and/or tax revenue to achieve a specific budget outcome. It is a legislative process that reflects the long-tested notion that fiscal changes, particularly deficit reductions can be politically perilous.

Reconciliation is among the most powerful procedural tools available to policymakers because bills passed through the reconciliation process are considered under expedited rules that limit the time of debate, the scope of amendments and the number of votes needed for passage. In the House, simple majorities can attach similar conditions to most legislative matters, so the unique parliamentary characteristics of reconciliation legislation are largely intended to override otherwise prevailing Senate rules.

In the Senate, a reconciliation measure is privileged, which means it requires only a simple majority to be brought to the Senate floor rather than the usual 60 votes. Thereafter, floor debate is limited to 20 hours, with further limitation on the scope and time that may be devoted to amendments. A simple majority is required for passage without the usual supermajority vote needed to advance to a vote on final passage.

Reconciliation and the Budget Resolution

For reconciliation measures to even be taken up by the House or Senate, a budget resolution must be agreed-to by both chambers, and must include instructions to committees to achieve specific budget outcomes through legislation. These instructions must include four key elements:

1.) the Committee to which the instruction is directed,

2.) the deadline by which the relevant committee or committees must comply,

3.) the specified dollar amount change to either revenues, outlays, the deficit, or the public debt,

Once a budget resolution is agreed to, committees have until their specified deadlines to produce reconciliation measures. According to the Congressional Research Service, Committees tend to respond to their directives in a timely fashion. However there have been instances when Committees have responded after their deadlines, but without consequence.[1] Once developed, the committee would then vote and pass (or nor pass) the measure and report it directly to their respective chamber.

If the Budget Resolution includes an instruction to more than one committee, the various committees would report their measure to the respective chamber’s Budget Committee. The Committee then performs what is essentially an administrative function of reviewing the measures and packaging them into an omnibus reconciliation measure that is then reported to the chamber as a whole. The Budget Committee may make no substantive changes to the measures. Once the measure or omnibus is reported to the chamber of the House or Senate, reconciliation measures are considered under special, expedited procedures. Once considered and if passed, resolution of differences between the chambers for the most part resembles the usual procedures. If both chambers ultimately agree to the same measure (through conference or amendment exchange) the measure is then sent to the president for signature or veto. Like other legislation, the Congress may attempt to override a veto of reconciliation legislation. However, once this process is complete, the reconciliation process is concluded – and the reconciliation instruction that ultimately prompted the law (or vetoed legislation) is effectively exhausted.

A key evolution of the reconciliation process is the enactment of the “Byrd rule,” named in honor of the late Senator Robert Byrd, but codified as section 313 of the Congressional Budget Act. The “Byrd Rule” was borne out of initial experiences with budget reconciliation whereby the procedure was used to pass measures that did not clearly relate to the reconciliation instruction, arguably an abuse of the fast-track process.[2] In 1985, to limit such perceived abuse, the Senate adopted on a temporary basis a point of order for striking “extraneous” matter from reconciliation bills, which require a 60 vote threshold to waive – virtually guaranteeing that such matters will be struck insofar as the underlying reconciliation bill likely only has the support of a simple majority. The rule was permanently adopted in 1990.

The “Byrd Rule” contains 6 definitions of what constitutes “extraneous matter.”[3] One key test is that reconciliation not increase the deficit beyond the budget-window. It is for this reason that the so-called Bush tax cuts were initially set to expire after 10-years: to preclude running afoul of increasing the deficit after the 10-year budget window. Accordingly, the legislation was shaped by the mere existence of the “Byrd rule,” rather than a specific invocation of it. According to the Congressional Research Service, there have been 65 points of order and 52 waiver motions, for a total of 117 actions, considered and disposed of under the Byrd rule, most recently 2 during consideration of the Affordable Care Act.[4] The most important consideration of the “Byrd rule,” is that it places a constraint on the breadth of policy changes that can achieved through the reconciliation process.

Should Republicans assume the majority in the Senate for the 114th Congress, they will be able to assume control of committees, set the Senate agenda, and exert considerably more influence over the confirmation process. However, because of super-majority rule that prevails during the consideration of most legislation, the ability to pass party-line legislation will remain limited. The key exception will be reconciliation legislation passed pursuant to a budget resolution. Through this mechanism, Republicans, working in conjunction with the House will be able to send measures to the president’s desk that current rules and the make-up have precluded for the last 6 years have prevented.