Congress passed the Dodd-Frank Act five years ago in an attempt to address the causes of the financial crisis. The law has imposed billions of dollars in costs with unclear benefits, with more regulations to be prescribed as regulators continue to slowly implement the law.

The law has imposed tremendous costs, but it appears the height of those impositions is in the past. The following chart examines rulemaking costs by year, from July 21, 2010, when Dodd-Frank was passed, to each later year.

Year 3 was clearly the high-water mark, and barring increased cost-benefit transparency from agencies, expect that year to continue claiming the highest costs. Given the pace of rulemaking, expect new regulatory burdens to easily extend into years six and seven.

Although much of the law has already been implemented, there are still dozens of rulemakings in the proposed stage, and dozens more that have not yet been proposed. According to Davis-Polk, a law firm that tracks the law, 60.3 percent of Dodd-Frank has been finalized, with another 21.5 percent that remains to be proposed. This means that roughly 18 percent of the law is still in proposed form. In other words, after five years of implementation, two-fifths of the law is pending. These remaining burdens will doubtless add to the $24 billion in existing final burdens.

The table below highlights the largest rules still in proposed form. These are recent measures that could be finalized soon. Combined, they could add another $7.8 billion to the law’s tally and more than 1.7 million paperwork hours.

The largest rulemaking, Capital Requirements for Swap Entities, is a joint proposal from five different agencies. Despite its modest paperwork imposition, the Regulatory Impact Analysis estimates that institutions would need capital margin requirements ranging from $280 billion to $3.6 trillion. For the purpose of the analysis, the agencies selected $644 billion, because it falls “roughly in the middle of these estimates.” Of course, the exact middle of those estimates is $1.9 billion, or three times the figure that the agencies choose. As a result of higher capital, the opportunity costs of the proposal range from $3.1 to $5.9 billion, undiscounted. AAF selected the figure of $5.2 billion, which is discounted at a three percent rate.

Another notable proposal, Pay Ratio Disclosure, would force thousands of companies to list the ratio of the highest compensated officers to the median pay of all workers in the organization. Set to be finalized next April, the Securities and Exchange Commission (SEC) only estimates annual costs of $72 million, with long-term burdens approaching $218 million. However, outside estimates peg the costs at more than $710 million annually with 3.6 million paperwork burden hours.

The pay ratio rule isn’t designed to increase capital, protect investors, or halt the spread of financial contagion. It, like several other provisions of Dodd-Frank, is designed to embarrass companies. As recent commenters have noted, “The pay-ratio rule is an attempt to shame companies and their boards to advance the ‘social justice’ goal of more equitable income distribution.” If finalized, the rule will only serve to needlessly impose costs on institutions, and eventually their shareholders and customers, while utterly failing to improve capital markets.

Looking forward, the Unified Agenda of federal rulemakings lists 29 measures in the prerule or proposed rule stage that are directly related to Dodd-Frank. Below are the rulemakings and their expected publication dates.

By imposing 61 million paperwork burden hours and costing more than $24 billion, Dodd-Frank is restricting growth in the financial services industry. However, while many of the rules enacted under Dodd-Frank are intended to limit risk among the largest financial companies, small firms seem to be paying the price with stagnant job growth. Figure 3 illustrates the growth in financial businesses since lawmakers passed Dodd-Frank.[1]

The financial industry as a whole has struggled since 2010, with the number of all financial firms growing only 2.0 percent from 2010 to 2014. However, the lack of growth primarily appears among small financial businesses. For instance, the number of firms with 10 to 19 workers and the number with 20 to 49 fell 0.3 percent and 1.0 percent respectively. Meanwhile the number of businesses with fewer than 5 workers only grew 0.7 percent and those with 5 to 9 only increased 1.7 percent. Even regional banks appeared to struggle as the number of financial firms with 500 to 999 workers decreased 0.5 percent since Dodd-Frank’s passage. In addition, the largest companies have grown rapidly, as the number with 1,000 or more employees increased 11.9 percent since 2010. So while the largest financial companies seem to be unaffected by Dodd-Frank, small and regional firms appear to be absorbing most of the bill’s costs. 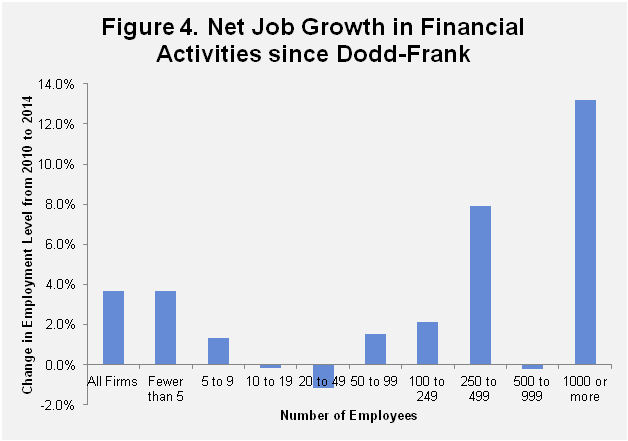 Mirroring slow growth in the number of businesses in the financial industry, the industry’s employment levels only increased 3.7 percent from 2010 to 2014. Within the industry, what types of firms grew? Again, it was the largest financial companies as employment in businesses with 1,000 or more workers advanced 13.2 percent. Meanwhile, employment in small and regional financial firms have either stagnated or contracted.

The continual decline in many financial services industries is illustrated in employment in savings institutions in Figure 5. Since Dodd-Frank became law, savings employment continued to fall.[3] 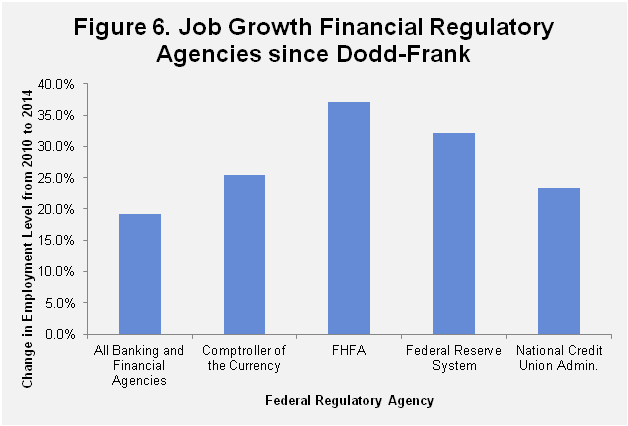 While jobs in the financial industry only increased 3.7 percent since Dodd-Frank became law, the number of jobs at federal financial regulatory agencies spiked 19.2 percent. However, this understates the growth in employment in some agencies. For instance, the number of workers at the Federal Housing Finance Agency (FHFA) and employees at the entire Federal Reserve System (all Federal Reserve Banks and the Board of Governors) increased 37.1 percent and 32.2 percent since Dodd-Frank.[4]

Impact of Credit Availability and Housing

The purpose of the Dodd-Frank Act was partly to stem abuses and fix systemic weaknesses in the financial services sector made apparent when the housing bubble burst and helped bring about the 2008 financial crisis. Yet many of the regulations promulgated under Dodd-Frank, intended to create a safer financial system, have adversely affected industry and consumers as previously mentioned. Banks of all sizes have reported high Dodd-Frank compliance costs, invariably driving up the cost of banking and lending for consumers. In its effort to make the financial system safer, Dodd-Frank has also restricted the availability of financial products and credit particularly for low-income borrowers, young people, and minorities.

Figure 7[5] shows how lending—whether commercial, real estate, or consumer—has not recovered in this economic recovery as quickly as the average post-WWII economic recovery due to the severity of the financial crisis and environment of tightened credit encouraged by the Dodd-Frank Act. Real estate lending has been the slowest to recover; it took over six years to reach the same level it was at the beginning of the recession. 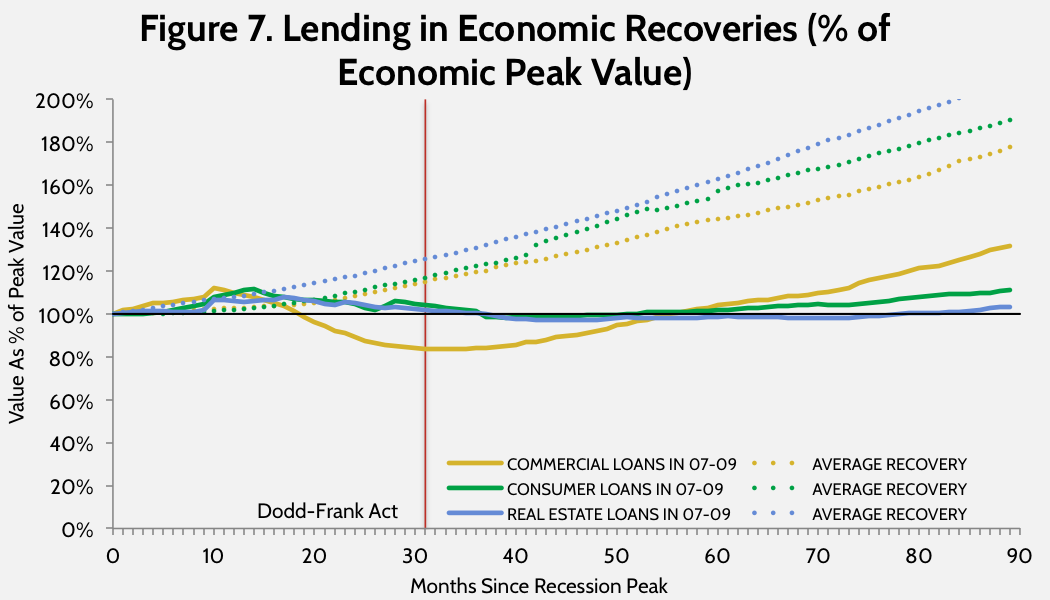 Source: Federal Reserve; Based on Author’s Calculations and NBER

Anecdotally, many market participants have expressed concerns over burdens stemming from Dodd-Frank, but the law also has very real economic costs. A report by AAF in 2012 attempted to show the economic impact of Dodd-Frank and Basel III regulations, concluding that the rules, as proposed at that time, would reduce lending (as evidence above) and result in fewer home sales. That decrease in loans and sales negatively impacted housing starts, employment, and GDP. While those rules have since been altered, regulators continue to struggle to balance the need to protect the safety and security of consumers and investors while also encouraging the continued and sustainable housing and economic recovery.

Similarly, a more recent analysis by AAF President Douglas Holtz-Eakin looked at the economic growth implications of Dodd-Frank, specifically how Dodd-Frank burdens affected savings and investment, and their linkages to growth. This research found a significant impact—roughly $895 billion in reduced Gross Domestic Product (GDP) over the 2016-2025 period, or $3,346 per working-age person.

While numerous regulations issued through Dodd-Frank are changing the landscape of mortgage lending, housing finance reform continues to be the most important unfinished business of the recession. With legislation to fix the housing giants stalled in Congress, Fannie Mae and Freddie Mac remain a very real risk to taxpayers and the very definition of too-big-to-fail, matters unaddressed by the Dodd-Frank Act. The failure to address housing finance reform has contributed to the uncertainty surrounding the future housing market, which, when coupled with Dodd-Frank regulations, have worked to reduce the availability of mortgage credit particularly for traditionally riskier borrowers. 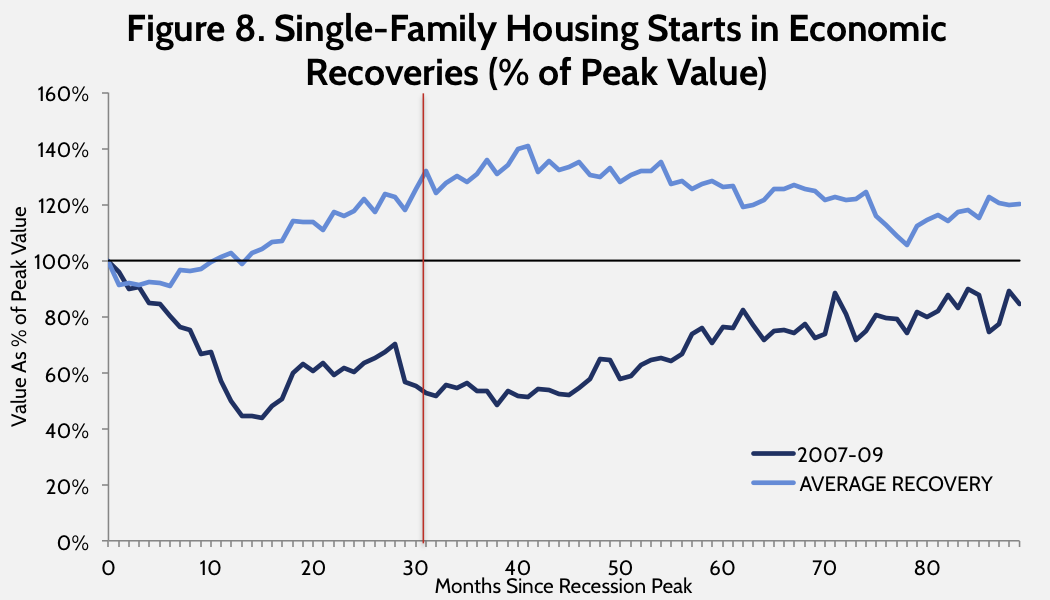 Source: U.S. Census Bureau; Based on Author’s Calculations and NBER

With tightened mortgage credit, high rates of foreclosure, and weak job and wage growth, many in this economic recovery turned to renting. Robust multifamily starts (buildings with more than 4 units) have helped pushed total starts to the same level they were at the beginning or peak of the recession in December 2007. Yet single-family housing starts stand at only 84 percent of that level, now almost 90 months since the recession began. Botched initiatives to help struggling homeowners, the Dodd-Frank Act, and its failure to tackle housing finance reform have contributed to the slow recovery of the housing market when compared with the average post-war recovery.

Dodd-Frank is now five after imposing more than $24 billion in costs and 61 million paperwork burden hours. As time passes, the law becomes more expensive as regulatory agencies like CFPB and FHFA grow with the mission to implement burdensome rules. Meanwhile, small financial services firms continue to struggle as the law restricts the availability of financial products. With about 21 percent of the law still left to implement, one can only expect the costs to continue to rise.

[1] Author’s calculations of change in number of establishments from 2010 to 2014 in Financial Activities. Establishment level data by number of employees come from the Bureau of Labor Statistics, http://data.bls.gov/cgi-bin/dsrv?en

[4] Figures are based on data provided by Susan Dudley and Melinda Warren in “Regulators’ Budget Increases Consistent with Growth in Fiscal Budget: An Analysis of the U.S. Budget for Fiscal Years 2015 and 2016,” Regulator’s Budget, http://regulatorystudies.columbian.gwu.edu/sites/regulatorystudies.columbian.gwu.edu/files/downloads/2016_Regulators_Budget.pdf

[5] Note: The Federal Reserve made a technical change to the way consumer loans are calculated. This figure corrects a noticeable jump due to that technical change, but maintains overall levels based on their historical increases.