Does Compensation Lag Behind Productivity?

It is frequently asserted that growth in labor productivity is outpacing growth in compensation. This suggests that the economy is not properly compensating workers, and is one of the key reasons many believe it necessary to raise the minimum wage, expand overtime pay coverage, mandate paid family leave, and increase union membership. We examine this assertion and find that it is based on faulty statistical analyses that employ misleading tactics by comparing labor market data that are not directly comparable. In particular, these claims are based on an analysis that:

After accounting for these issues, we find that real compensation has grown closely with labor productivity over the last fifty years.

While advocating for policies like raising the minimum wage and expanding overtime pay coverage, many assert that compensation has not grown with labor productivity. They claim that since the 1970s there has been a stark divergence between the growth in worker pay and the growth in labor productivity. According to the Economic Policy Institute (EPI), productivity has grown eight times faster than worker compensation in recent years, as productivity rose 64.9 percent and hourly compensation only grew 8.2 percent from 1979 to 2013.[1] Taken at face value, these numbers are alarming. They suggest that rewards from productivity growth are going almost exclusively to company profits and those workers at the top, while regular workers are neglected. Fortunately, the putative trend is based on a number of analytical flaws, such as comparing labor productivity of the entire economy to compensation for private sector production and nonsupervisory workers. The result is a story that simply is not true.

Comparing the Purported Trend to Reality 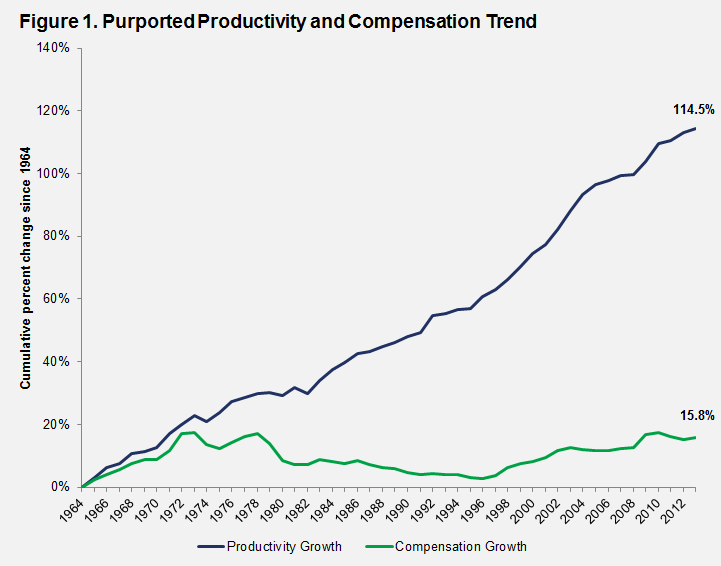 Figure 1 is a reconstruction of a graph featured in a 2014 EPI paper.[2] Graphs similar to Figure 1 have been featured prominently by EPI, unions, and a presidential campaign, which use it to justify policies like raising the minimum wage, expanding overtime pay coverage, and increasing union membership. Figure 1 compares the growth in real hourly compensation to real labor productivity over time. The former represents what workers receive from the economy and the latter illustrates the value of what they produce in it every hour. According to the chart, the two metrics began to diverge during the 1970s and growth in labor productivity has been outpacing growth in hourly compensation ever since. As a result, since 1964 real labor productivity has increased 114.5 percent and real hourly compensation has only risen 15.8 percent. 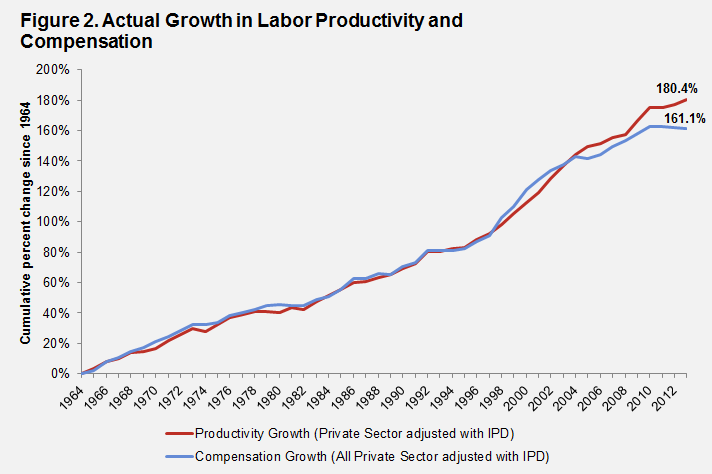 How could two measures of the same phenomenon be so different? In the following, we show step-by-step how the illustration of labor productivity and compensation in Figure 1 differs from official labor statistics.

Step 1: Figure 1 compares productivity for the entire economy to compensation for workers in the private sector

Step 2: Figure 1 Compares Labor Productivity of All Workers to Compensation of Production and Nonsupervisory Workers

As can be seen in Figure 4, tracking growth in real compensation for all private sector workers significantly closes the gap between productivity and compensation. 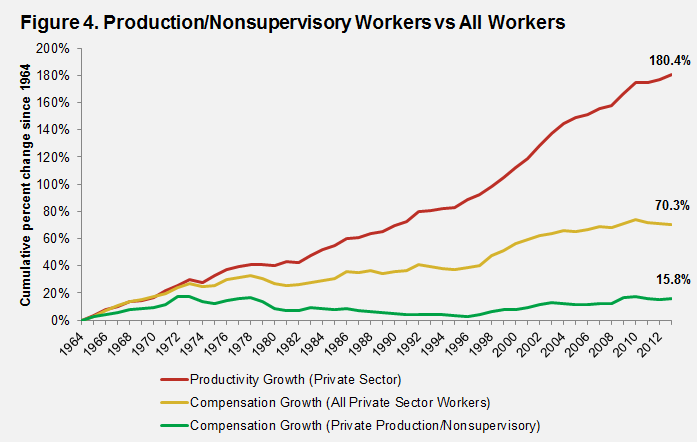 So which price index should we use?  The fundamental difference between IPD and CPI is that IPD measures changes in the prices of goods and services produced by businesses and CPI measures the change in prices of goods and services that are consumed in America, including those that are produced outside of the United States. According to Martin Feldstein, President Emeritus of the National Bureau of Economic Research, a “competitive firm pays a nominal wage equal to the marginal revenue product of labor, i.e., to the marginal product of labor multiplied by the price of the firm’s product.”[7] In other words, a worker’s compensation is based on his or her benefit to the firm, which depends on the prices of the firm’s products not the prices of the goods consumed by all Americans. Thus, IPD is far more appropriate because the price changes of goods businesses sell have a more direct impact on employee pay than do price changes of other consumer goods.

Figure 5 shows that simply adjusting compensation for inflation with IPD instead of CPI closes almost the entire remaining gap. 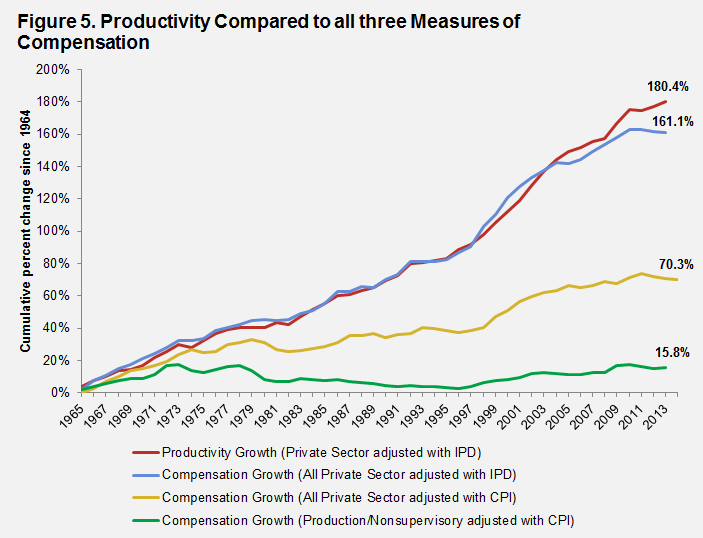 When adjusted with CPI, real hourly compensation for all workers in the private sector increased by 70.3 percent since 1964. However, when adjusting compensation with IPD, it grew by 161.1 percent. The blue and red lines in Figure 5 are the same shown in Figure 2.

Clearly, methodology matters in this discussion. When the private-sector growth of productivity and total compensation are compared using all private sector workers and the same output price deflator, it is apparent that compensation and productivity have grown hand-in-hand. As a result, the assertion that regular workers do not benefit from economic growth is based on a faulty analysis that essentially underestimates the growth in real hourly compensation during the last half century. Most troubling, these assertions inspire misguided policies, such as raising the minimum wage or expanding overtime pay, which have been shown to provide minimal benefit to those in need and often hurt the workers and families the policies aim to help.

[2] Ibid., We took data on productivity directly from the EPI paper. As in the EPI paper, compensation data are for production and nonsupervisory workers in the private sector. We calculated hourly compensation by multiplying average hourly earnings of production and nonsupervisory workers from the BLS Current Employment Statistics (CES) by a compensation-to-earnings ratio. We derived the compensation-to-wage ratio by dividing average total compensation by average wages and salaries from the Bureau of Economic Analysis (BEA) National Income and Product Account (NIPA) tables. The recreation is not exact. In particular, EPI’s chart begins in the 1940s. However, relevant data at the BLS are only available from 1964 onwards. Regardless, the overall trend is very similar as the one illustrated in the original EPI graphs.