One common assertion accounting for the continuous rise in college tuition is that state budget cuts for higher education are passed on to students in the form of increased tuition and fees. Indeed, policymakers and pundits often express concerns that declines in higher education budgets are making higher education unaffordable for low-income students and their families. Examining the previous six years of state-level expenditures for higher education, this analysis explores the relationship between funding levels and changes in tuition. We examine national trends as well as state-level data. By comparison, over the same timeframe, national tuition at both two-year and four-year public schools increased annually at an average of three percent. Tuition at two-year schools grew from $3,473 to $3,962 and at four-year schools from $8,229 to $9,318.[3] And while the rate of tuition increase is greater in the years that showed sharp declines in state funding, tuition continues to climb despite three years of funding increases. Charts 2 and 3 show the comparison of the percent change of state expenditures versus the changes in tuition at public institutions of higher education. Over this six-year period the states spent nearly $463 billion to fund higher education; however, expenditures by individual states vary widely with California spending nearly $65.5 billion and Vermont spending nearly $550 million, in unadjusted dollars. These figures are shown in the following chart. The following tables further demonstrate the trends of annual expenditures and changes in tuition for the five leaders and lagers in the nation. Table 2 reflects the most recent one-year changes in expenditures and tuition. Similar to the results in table 1, tuition tends to increase with only two states, California and New Hampshire, seeing decreases in tuition for two-year public schools. Tables 3 and 4 focus on the six-year percent change of state expenditures for higher education rather than the actual dollar amounts.

We find that Montana leads the cohort with a 45 percent change in funding, as shown in table 3. This translated to a 2 percent decrease in tuition at two-year schools and slightly more than a 3 percent increase for Montana’s four-year institutions. In Louisiana, one of only two states where tuition behaved in a manner that corresponds to the change in state expenditures, an 8 percent decrease in funding led to a 64 percent and 52 percent increase in two-year and four-year tuition, respectively. Finally, in table 5 we group all states based on six-year percent change in state funding levels finding only nine states that saw an overall decrease comparing SY2010-11 to SY2015-16. 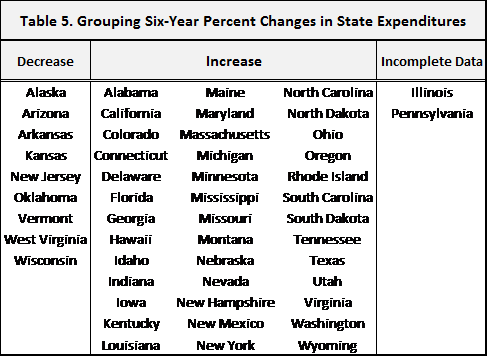 From 2010 to 2012, community colleges and universities felt the sting of sharp decreases in in state-level funding for higher education. The cut and dry correlation between tuition hikes and state funding cuts isn’t demonstrated in the analysis. Instead we find that regardless of state expenditures tuition tends to grow at an average of 3 percent a year. This would suggest that other factors such as those that AAF previously examined explain the constant rise in college tuition.

An Annual Compilation of Data on State Fiscal Support for Higher Education – A joint project of the Center for the Study of Education Policy at Illinois State University and the State Higher Education Executive Officers (SHEEO).

[2] The data reported here exclude FY16 figures for Illinois (which has not yet enacted a FY16 state budget) and Pennsylvania (where the FY16 budget remains incomplete.)

In the latest effort to pander to student borrowers, the White House press office released a fact sheet in conjunction with a multi-agency messaging campaign…

For over a century policymakers have aided students interested in attending college in an effort to achieve a level playing field. Recent research by…

Summary: “Accounting for the Rise in College Tuition”

College tuition has been on a rapid ascent for several decades; since 1987, the average sticker price for going to college has more than doubled, even…

The Education Services sector lost 38,500 jobs and delving into the data a little further reveals some concerning trends.