The rise of the so-called “gig economy” and the increasing use of independent contractors has captured the attention of policymakers. Nontraditional work arrangements are hardly a new development in the American economy, yet there is the perception that smartphone apps and online marketplaces have led to a sharp increase in nontraditional work and even a new class of jobs. The goal of this short paper is to survey the limited available data to shed light on the magnitude of these labor force developments.

We find that the number of workers in the gig economy grew between 8.8 and 14.4 percent from 2002 to 2014. For comparison, overall employment increased by 7.2 percent over the same period. Independent contractors constitute a significant portion of gig workers, and grew by 2.1 million workers from 2010 to 2014, accounting for 28.8 percent of all jobs added during the recovery. The online gig economy has experienced significant growth as well. Faster growth in taxis and boarding rooms since the arrival of companies like Uber, Lyft, and Airbnb indicates that online gig jobs are transforming the labor force. In particular, the data suggest that the ride sharing industry has helped bring in an additional $519 million in economic activity from 2009 to 2013, and created 22,000 jobs in the sector.

Defining the Gig and Sharing Economies

A common phrase for the businesses and workers that are marked by alternative jobs that are usually temporary and influenced by technology is the gig economy. Gig workers are mostly independent contractors and freelancers. The workers who could also be considered gig workers include agency temps, on-call workers, contract company workers, self-employed workers, and standard part-time workers.

A related concept in product markets is the sharing economy; services and goods that employ under-utilized assets via online marketplaces or decentralized networks for both monetary and non-monetary benefits.[i] For example, if you have extra time, you can contribute to Wikipedia or Linux. If you have an idle computer, you can download the [email protected] program and help advance medical research and cancer drug design.[ii]

Though still in the early stages of development, some sharing economy business models adopt the alternative worker arrangements of the gig economy. Uber, Lyft, and Airbnb are just a few examples of how companies are merging the temporary work arrangements of the gig economy with the sharing aspects of an online marketplace.[iii] The chart below illustrates the relationships between the concepts. The employment conditions for the workers who fall under this category are frequently the topic of policy discussions. So in addition to evaluating the overall gig workforce, we analyze the trends in this subset of the gig economy, which we will refer to as the online gig economy. 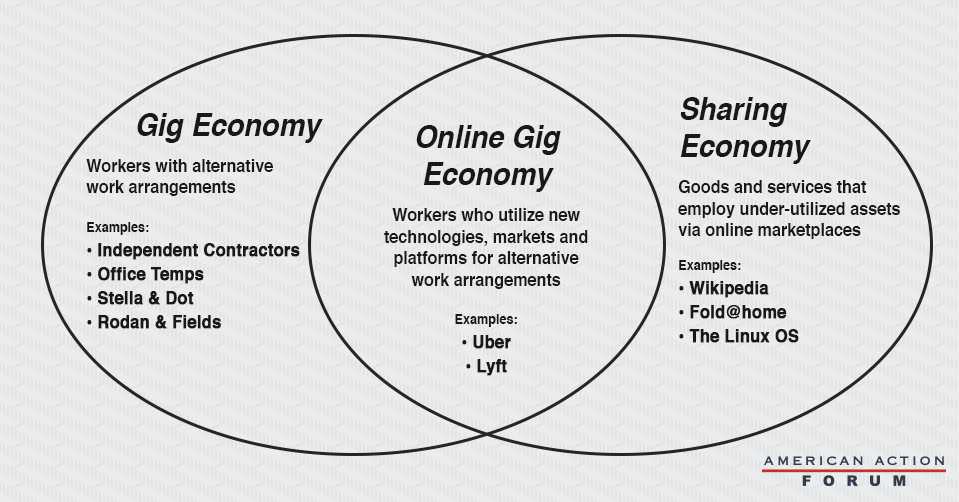 There is no official classification for gig economy workers. We can, however, use estimates of the size of the contingent workforce to provide insights into these workers. The Government Accountability Office (GAO) recently examined the entire contingent workforce. Under its broadest definition, GAO found that in 2010, 40.4 percent of workers were contingent employees.[iv] This definition of contingent workers included anyone who was not a standard full-time employee; i.e., it encompassed agency temps, on-call workers, contract company workers, independent contractors, self-employed workers, and standard part-time workers. Under its more narrow definition, GAO estimated that 7.9 percent of the workers were “core” contingent workers. This only included agency temps, on-call workers, and contract company workers.[v]

The actual number of gig economy workers likely falls in between these two ranges. For instance, the majority of standard part-time workers are in construction, manufacturing, retail, education services, and accommodation and food services, which are not necessarily the type of industries associated with smartphone apps and software specialists. Meanwhile, independent contractors and freelancers, who are excluded from GAO’s core contingent category, likely consist of the gig economy workers.

Using data from the General Social Survey (GSS)[vi], a statistical survey conducted by University of Chicago’s National Opinion Research Center, we can proxy the workforce trends of the contingent worker categories that are most representative of the gig economy. These trends are illustrated in Table 1.[vii] For our most narrow measurement of gig workers (labeled Gig 1) we simply include independent contractors, consultants, and freelancers. Our middle measurement (Gig 2) includes all Gig 1 workers plus temp agency workers and on-call workers. Our broadest measurement (Gig 3) includes all Gig 2 workers plus contract company workers.

Overall, we estimate that in 2014 there were 20.5 million to 29.7 million people in the alternative work arrangements that are often featured in the gig economy, constituting 14.0 percent to 20.3 percent of all employed people.

Growth in Gig Workers in the 21st Century

From 2002 to 2014, gig workers grew at a rapid pace, despite taking a hit during the recession.[viii]

During that time period, total employment increased by 7.2 percent. Meanwhile workers in the gig economy expanded between 8.8 percent and 14.4 percent. As a result, while independent contractors (Gig 1) made up 14.0 percent of the workforce in 2014, they represent 16.9 percent of all new jobs added during the previous 12 years. Our broadest measure of gig workers (Gig 3) indicates that they accounted for up to 38.2 percent of job growth.

Trends in Non-employer Establishments and the Online Gig Economy

Standard labor data also do not easily reveal employment changes due to the online gig economy. For example, Etsy, the online marketplace, found through surveys that only 48 percent of its sellers would consider their work on the site as independent work; either a full time, part time, or temporary.[ix] About 24 percent of all sellers identify themselves as unemployed. Another 26 percent of sellers have full time jobs other than their Etsy store. Standard labor market surveys would probably underreport these workers, even though they receive income via one of the biggest companies in the online gig economy. Etsy also found that only 2 percent of sellers are incorporated. Meanwhile, 90 percent of sellers are sole proprietorships, and by their very definition have no employees.

Since the beginning of the recovery in 2009,[x] nearly 1.3 million new nonemployer establishments were created, outpacing growth in total employer establishments to become nearly 75 percent of all businesses. From 2009 to 2013, these companies had $129 billion in additional receipts, which translates to a 14 percent increase over this time period. Of the nearly 270,000 nonemployer businesses added between 2012 and 2013, three sectors accounted for 60 percent of the growth: other services; real estate, rental and leasing; and transportation and warehousing.[xi]

The growth in companies like Airbnb, Lyft, and Uber coincides with the significant gains in the transportation and warehousing sector, suggesting that these companies have likely driven nonemployer establishment growth. For instance, from 2002 to 2008, the number of new taxi and limousine companies increased at an average rate of 4.3 percent per year. After Uber was established, the average annual growth rate in taxi and limousine companies jumped to 7.0 percent from 2009 to 2013.[xii] Similarly, the total receipts from 2002 to 2008 increased at an average annual rate of 8.3 percent, and then jumped to 10.1 percent from 2009 to 2013. Moreover, growth in receipts has accelerated in recent years as the number of new nonemployer establishments and the total receipts each increased by 11 percent in 2013 alone. The faster growth since ride sharing companies entered the market has led to significant economic advances in the taxi and limousine industry. In 2013 taxi and limousine receipts were about $519 million higher than they would have been had the pre-ride sharing growth continued since 2009. That’s about 19.5 percent of the $2.7 billion in growth in receipts since 2009. Similarly, there were 22,000 more nonemployer establishments, which probably equates to 22,000 unique jobs. That means the accelerated growth since ride sharing companies formed accounts for 41.3 percent of nonemployer establishments created since 2009. 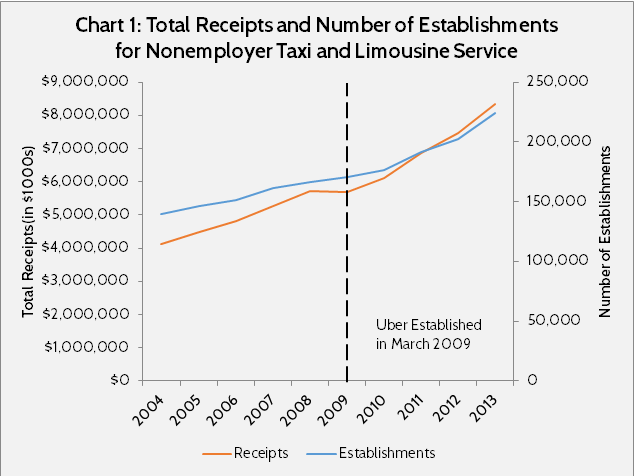 The rideshare industry is not the only part of the online gig economy to see rises in usage. Before Uber, Lyft, Sidecar, and others were turning the taxi industry on its head, VBRO and others invited regular people to rent out their property as alternative living arrangements for vacationers. Soon after Airbnb was founded in late 2008, the total number of people offering their houses and apartments to others increased by 18 percent and total receipts increased by nearly 20 percent.

The gig economy is of rising importance in the overall U.S. economy. From 2002 to 2014, workers in the gig economy expanded between 8.8 percent and 14.4 percent. Independent contractors, most notably, helped put 2.1 million people to work, accounting for 28.8 percent of all jobs added from 2010 to 2014. The ride sharing industry alone helped bring in an additional $519 million in economic activity from 2010 to 2013 for independent workers, while injecting 22,000 jobs into the sector. Though it is early, the online gig economy also seems to also be a growing piece of United States’ economy of the 21st century.

[i] Rachel Botsman, Defining The Sharing Economy: What Is Collaborative Consumption—And What Isn’t?, http://www.fastcoexist.com/3046119/defining-the-sharing-economy-what-is-collaborative-consumption-and-what-isnt

[iii] It is important to note that some analysts exclude Uber and Lyft from the sharing economy because they believe there is little sharing and collaboration involved in the service. However, these on-demand services do connect buyers and sellers in real time via a centralized market. Moreover, for those drivers that don’t work full time, which is about 81 percent of all drivers, the cars would still idly otherwise, which seems to qualify them for the sharing economy.

[xii] The 2009 reduction and deceleration in establishments and receipts that occurs in both taxi and limousine services and room and boarding was likely caused by the national economic recession from 2007 to 2009. This is also around the time when the initial online gig economy businesses were established. To analyze the impact of the online gig economy, we use 2009 as their initial period and measure the growth in their industries since.

“Year One”: Assessing the Biden Regulatory Record Against Recent Administrations