The Keystone XL pipeline has the potential to bring huge gains to the United States, including energy independence, increased security and jobs. The $8 billion, 1,179 mile line, to be operated by Canadian firm TransCanada, would run from Montana to Nebraska and deliver an estimated 830,000 barrels a day of crude to refineries located along the gulf coast. At today’s price of crude at $51.76, this would gross over $42 million dollars a day or roughly $15 billion per year.

TransCanada has waited since September 2008 for authorization of the pipeline. With crude oil prices at a 10 year low, approximately $175 billion in economic activity has been unrealized due to the delay.

The U.S. would benefit significantly from increased oil imports from Canada as it would lessen our reliance on imports from more unstable areas of the world such as the Middle East, Russia and Venezuela.

According to the Energy Information Agency, the U.S. imported approximately 9 million barrels per day of petroleum in 2014 from 80 countries with the bulk of its oil imports from Canada, Mexico, Saudi Arabia, Venezuela and Russia.

Since 2009, the U.S. has paid over $1 trillion to these top five countries with just over half of it going to Russia, Venezuela and Saudi Arabia. 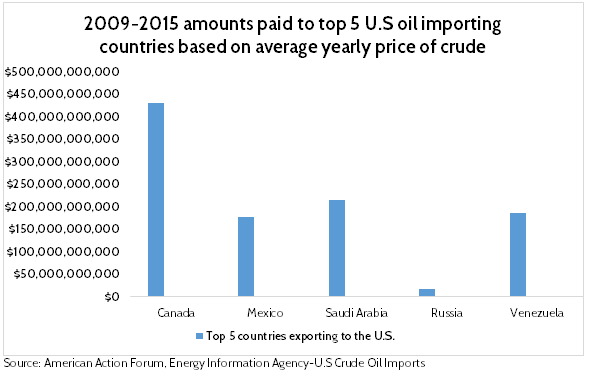 In February 2015, President Obama vetoed legislation that would have authorized the construction of the Keystone XL Pipeline.  However, the president still has the authority to approve it through an executive order. The president has stated that he would sign off on the proposal only if it “does not significantly exacerbate the climate problem.”

Currently, the fate of the pipeline is in the hands of the State Department, which must review the proposal to determine whether it’s in the national interest. The State Department has jurisdiction over the project because the pipeline stretches through both the U.S. and Canada. The State Department sought the oversight of eight additional Federal agencies to provide their views on the subject of national interest including the Departments of Defense, Justice, Interior, Commerce, Transportation, Energy, Homeland Security, and the Environmental Protection Agency. The review was set to be completed on February 2, 2015 however the permitting process has no set deadline.[1]

In January 2014 the State Department released the Final Supplemental Environmental Impact Statement for the Keystone XL Project in which it concluded that the proposed pipeline would not increase greenhouse gas emissions by a significant amount. Previous AAF research also indicated that carbon emissions stemming from the Keystone XL pipeline would be significantly less than that coming from rail transport, additionally, the risk of oil spills is greatly reduced as pipelines have a lower spill rate than rail.

More recently, the State Department back tracked saying that the original study was based on oil being in the $75 plus range noting that prices below the range of $75 dollars would pose a significant challenge to the project’s economic viability.

From the supplemental review:

“Over the long term, lower-than-expected oil prices could affect the outlook for oil sands production, and in certain scenarios higher transportation costs resulting from pipeline constraints could exacerbate the impacts of low prices….Above approximately $75 per barrel for West Texas Intermediate (WTI)-equivalent oil, revenues to oil sands producers are likely to remain above the long-run supply costs of most projects responsible for expected levels of oil sands production growth. …Oil sands production is expected to be most sensitive to increased transport costs in a range of prices around $65 to $75 per barrel….Prices below this range would challenge the supply costs of many projects, regardless of pipeline constraints, but higher transport costs could further curtail production.”

Fiscally, economically, environmentally and strategically speaking this project is a win. After nearly 7 years and $175 billion in lost economic activity, it is time for the construction of Keystone to come to fruition in order to allow Americans to experience the economic benefits.