Economic recovery following the Great Recession has been mediocre at best. However, states that lead in energy production have performed much better throughout the recovery than those that import the majority of their energy from other states. AAF’s research finds that since 2009, major energy producing states have:

·       Double the rate of income growth than energy importers,

·       Over double the rate of job growth than energy importers, and

Intuitively, the states with large energy industries have a dependable source of income that can be used to hire more workers, increase pay, and purchase various personal consumption goods.

Some states have been more effective at leveraging the energy boom than others. North Dakota, Pennsylvania, and Texas have each dramatically increased primary fuel output thanks to innovations in fracking and pro-development state policies. Even during the recession, these states drew investment for resource recovery; both Texas and North Dakota more than doubled their oil production between 2006 and 2013, and Pennsylvania increased natural gas output more than 10 fold. The fracking boom even helped turn Texas and Pennsylvania from energy importing states into energy exporters in 2011. We’ll call these game changing states the “major producers”.

Other states have not experienced the same energy revolution. These states don’t have access to energy reserves of significant size, have resources that are more difficult to access, and/or face significant political opposition to resource development. Nevertheless, they serve as a poignant comparison to our energy game changers.

We group together a number of geographically distributed states, with wide variation in demographic trends, industrial bases, and scales of local economies. What they have in common is that they import quite large quantities of energy. Among our “major importers,” we count California, Delaware, Florida, Georgia, Idaho, Illinois, New Jersey, Nevada, New York, and Ohio. 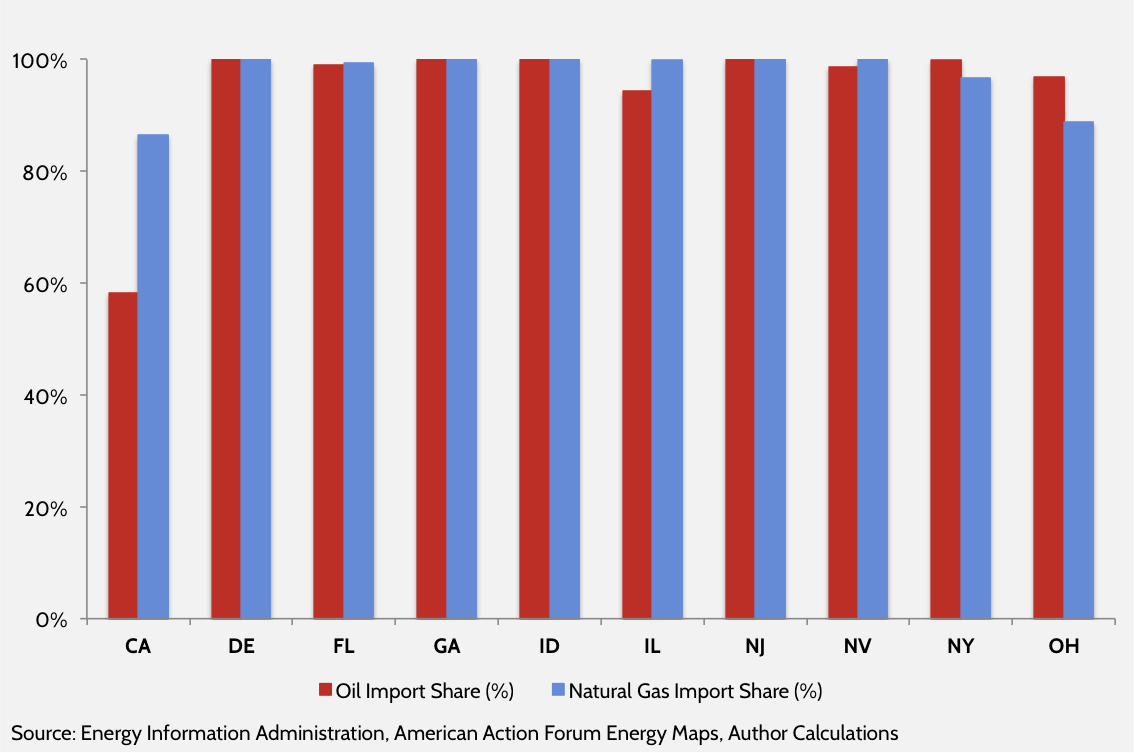 Each state imports at least 90 percent of natural gas demand and 95 percent of oil demand, with the exception of California. Though California imports just 60 percent of the oil it consumes, it is far and away the largest net importer of oil, earning it a spot on this representative list.

With these two groups established, we will examine how several economic indicators vary between the major producers and the major importers.

Data from the Bureau of Economic Analysis (BEA) and Bureau of Labor Statistics (BLS) show that the recovery experienced by the largest energy producing states has greatly outpaced the recovery in the largest energy importing states. Since the end of the recession in 2009, the major producers have experienced much faster economic growth than the major importers. Since the recovery began, real GDP in North Dakota, Pennsylvania, and Texas has on average grown at an annual rate of 5.8 percent, considerably higher than the average 1.4 percent rate experienced by major importers.

The faster economic growth in the major producing states has also led to far more favorable labor market conditions, with job creation far outpacing that in the major energy importing states since the end of the recession.

In North Dakota, Pennsylvania, and Texas employment has grown each year at an average rate of 1.5 percent since the recession ended in 2009. In the major energy importing states, the job growth rate has been a disappointing 0.6 percent. It is clear that throughout the recovery it has been much easier to find a job in the major energy producing states.

Pennsylvania, North Dakota, and Texas also see considerably lower rates of involuntary part-time employment—or the rate at which workers who desire full-time jobs are stuck in part-time jobs because they are unable to find full-time work. 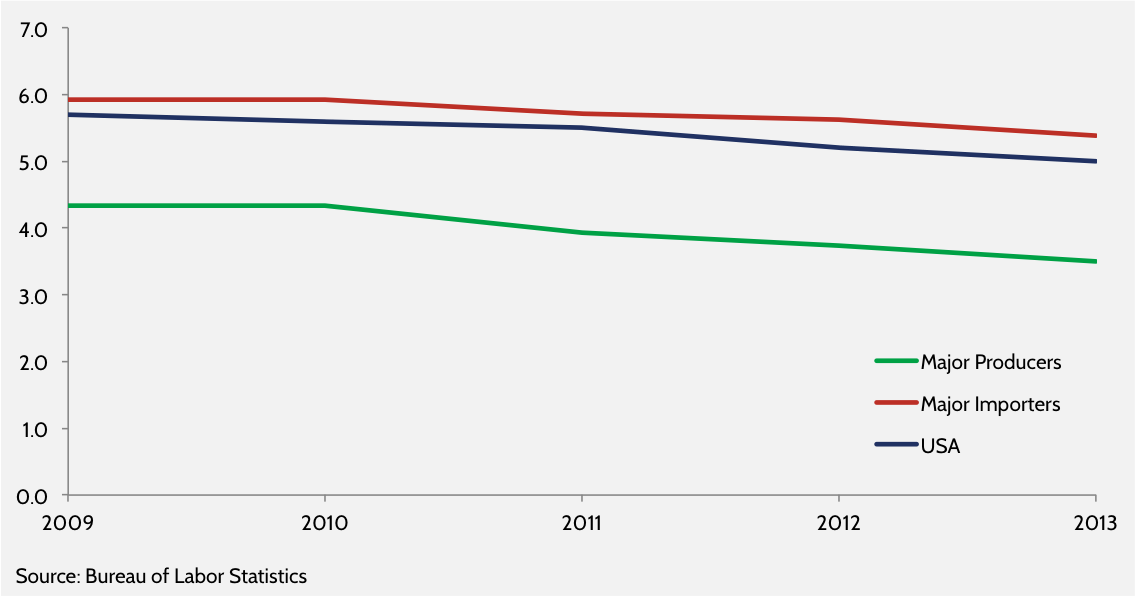 Just like for the unemployment rate, the involuntary part-time employment rate has been much lower in the game changing energy production states throughout the recovery than in the major importing states. In 2013, the average rate was only 3.5 percent among the major producers. For the major energy importers, the rate was almost 2 percentage points higher at 5.4 percent.

The economic benefits from the rapid recoveries among the major producers have also translated into quicker growth in incomes and wages. Table 1 illustrates increases in nominal incomes, weekly pay, and hourly earnings since the recovery began in 2009.

TABLE 1. GROWTH IN NOMINAL EARNINGS SINCE 2009

The adoption of hydraulic fracking in North Dakota, Pennsylvania and Texas has been a game changer; these states have helped turn the U.S. into an energy power house and in turn have received the benefits of faster economic and job growth as well as higher wages. It is then unsurprising that the housing crisis was less severe in these states or had little effect at all. When people are gainfully employed, secure in their jobs, and expecting their incomes to rise, they are more likely to be interested in homeownership and able to afford it.

The bust of the housing bubble led to widespread declines in house prices starting in 2006, concurrent with the start of the fracking boom. Nationally, this halted new home construction, causing many in the industry to lose their jobs. The major producers were not immune from the housing crisis, yet the trajectory of their markets was on average less volatile. Their housing recovery has further proceeded more quickly than the rest of the country.

Figure 7 shows year-over-year growth in house prices. On average, increases in the major energy producers were less exuberant heading into the recession, which is shaded dark gray. When house prices did begin to decline, they never changed on a year-over-year basis by more than -1.6 percent in contrast to the major energy importers, which noted drops of up to 15.6 percent during the recession. House prices also began to increase earlier in the major producer states, turning positive in July 2011 and staying that way for the past 3 years. Prices did not begin to grow nationally or for the energy importing states until August 2012.

Nationally, while prices have risen since hitting bottom in 2012, construction has yet to pick up. Homebuilding has virtuous effects on the economy, employing workers and spurring the purchase of a variety of goods (e.g., lumber, appliances, furniture). Yet buoyed by growth in the energy sector, prices and construction jobs in the major producing states are higher than they were prior to the recession. Table 2 shows growth in permits, prices, and construction jobs, three important tools to gauge the status of housing markets.

The monthly average of prices and construction employment in 2013 among major producers exceeds their average before the recession. Single-family permits, traditional standalone homes, have been slow to recover around the country, and the same is true for the energy producers. However, multifamily permits stood 24 percent higher in 2013 than they did prior to the recession. For every major indicator, the energy producers are closer to recovery than the nation, on average. And for every major indicator, major energy importing states lag improvements in their housing markets when compared to nation as a whole.

The energy boom, spurred by breakthroughs in fracking and pro-growth state policies, created hundreds of thousands of jobs in a few crucial states. These jobs represent just a small fraction of employment growth and earnings, nationally, yet the trends are clear. The major producers – Pennsylvania, North Dakota, and Texas – were much better able to absorb and recover from the housing bubble and Great Recession than the major importers.

This provides us a valuable lesson. As the U.S. increases energy production and begins exporting more oil and natural gas to international partners, it insulates the economy from major international perturbations. Like the major producers, we hedge against a future economic downturn. Policies that discourage energy development – by prohibiting exports, restricting access to public lands, or making exploration and development cost prohibitive – jeopardize growth and increase the vulnerability of our domestic economy.