The interaction between regulation and private industries is highly complex. Since 2008, the federal government has imposed $733.9 billion in regulatory costs. AAF research indicates that the cumulative cost of all regulatory compliance devastates small businesses. Specifically, for every 10 percent increase in regulatory costs in an industry, the number of small and medium-size businesses in that industry falls 3 to 6 percent. The number of large businesses, meanwhile, grows 2 to 3 percent. In sum, we find that regulations cumulatively have a highly regressive effect, substantially reducing the smallest businesses and growing the largest.

In a series of previous papers, AAF closely examined the cumulative impact of new regulations on private industries. In our last of these papers, for instance, we found statistically significant evidence that every $1 billion in new regulatory costs is associated with a 3.6 percent decline in industry-level employment.

To examine the effect of new regulatory costs, for each business size category we estimate the change in the number of establishments in an industry associated with an increase in the affected industry’s regulatory cost burden. AAF employs industry-level data for each business size category from the Census Bureau’s 2012 County Business Patterns and uses average number of establishments in the industries[1] in each year from 2003 to 2012.[2] The regulatory cost estimate for each industry in a year is the sum of the projected annual costs of all new regulations an industry faced from the beginning of the time to the given year. We also adjust regulatory cost projections for inflation to 2012 dollars.

We find that regulatory costs are cumulatively associated with statistically significant changes in the number of industry establishments for each business size. 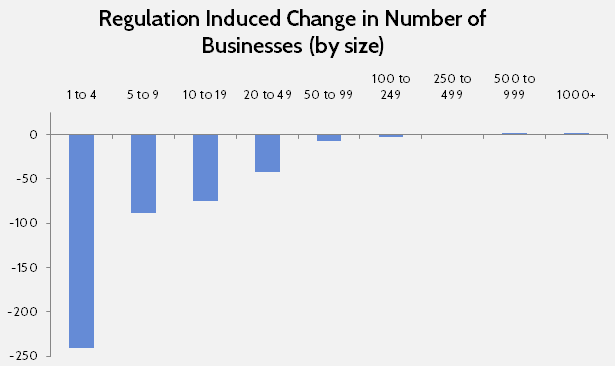 Why would large businesses grow, despite facing regulatory costs? It could be that the largest businesses are most able to absorb regulatory costs, giving them a competitive advantage over smaller companies.[3] Previous research has found that this regressive trend is particularly apparent in the financial services industry. According to a 2012 Government Accountability Office (GAO) report, “[r]esearch suggests that one area in which large banks are able to take advantage of economies of scale is regulatory compliance, which contributes to their advantage in terms of operational efficiency.”

A 2013 Minneapolis Fed study emphasized the paperwork burdens and what being forced to hire compliance staff means for small banks. The study found that hiring two additional compliance officers reduced profitability by 45 basis points (roughly half-a-percent) and that one-third of the small banks studied would become unprofitable.[4] Moreover, Federal Reserve Board Governor Daniel Tarullo has warned policymakers about regressive regulation: “Any regulatory requirement is likely to be disproportionately costly for community banks since the fixed costs associated with compliance must be spread over a smaller base of assets.”

Beyond the empirical evidence that regulations disproportionately affect smaller institutions, regulators actually admit that rulemaking hurts small businesses. In a set of recently proposed efficiency standards of furnaces, the Department of Energy (DOE) noted that conversion costs for the measure would equal 18 percent of small business revenue, compared to just three percent of large business revenue. Furthermore, in EPA’s greenhouse gas regulation reporting rule, the agency noted that costs per entity for the smallest firms would be 1.32 percent, compared to 0.02 percent for the largest companies. In other words, for the reporting rule, regulatory costs are 65 times more burdensome for small businesses. Finally, in one regulation, DOE stated that the rule would likely cause small businesses to leave the air conditioning market or merge with larger competitors. DOE wrote, “It is possible the small manufacturers will choose to leave the industry or choose to be purchased by or merged with larger market players.” Regulations unquestionably have regressive impacts; just ask the regulators.

Regulation does not just affect small businesses, it hurts the smallest more significantly than medium-to-large-sized establishments. The data are clear: as regulatory burdens increase the smallest businesses (1-19 employees) shed hundreds of establishments while the largest businesses (1,000 or more employees) actually grow by 3.4 percent. Despite regulatory reform designed to protect small businesses, sheer economies of scale and unchecked regulators have made life for small employers incredibly burdensome.

We use industry fixed effects to control for characteristics that vary across industries, but not over time. Also, to account for macroeconomic forces that change over time, such as the loss of businesses and jobs during the Great Recession, we control for year. To account for changes in prices during the time period, we control for industry chained Consumer Price Index. Also, any fixed effects model can face the problem of autocorrelation, in which a variable is correlated with itself over time and biases the results. Our model addresses this issue by using heteroskedasticity-and autocorrelation-consistent standard errors. The exact model is displayed below.

[1] The industries we examine can be found in “The Cumulative Impact of Regulatory Cost Burdens on Employment,” American Action Forum, May 2014, http://americanactionforum.org/research/the-cumulative-impact-of-regulatory-cost-burdens-on-employment

[4] Marshall Lux and Robert Greene, “The State and Fate of Community Banking,” available at http://www.hks.harvard.edu/centers/mrcbg/publications/awp/awp37.

[5] To avoid the dummy variable trap, the binary variable that represents businesses with 1,000 or more workers was excluded from the model. As a result, the total effect of regulatory costs on those businesses was captured only by the three log(Cost) terms.

[6] We purposefully omit Yr1 from the regression model to avoid the dummy variable trap.