Under the Paperwork Reduction Act (PRA), businesses and individuals are required to submit and retain federal forms.  Contrary to its name, the Act hasn’t resulted in drastic reductions in paperwork, with the current burden at 10.3 billion hours of regulatory compliance.  There are penalties, including fines, for failure to comply for individuals.  But what happens when federal agencies don’t comply with the PRA?

In the past three fiscal years, dozens of agencies have ignored the PRA, either by collecting information without proper approval or allowing collections to lapse without following the renewal process.  The worst offender of the PRA, by far, is the Department of Health and Human Services (HHS), at 31.5 percent of all violations.  With more than 150 violations since FY 2009, it has received “Poor” marks from the Office of Management and Budget within the White House.  The closest offender to HHS is the Department of Defense, with 88 violations.

Based on grading scale from the most recent OIRA report, issued in 2013. 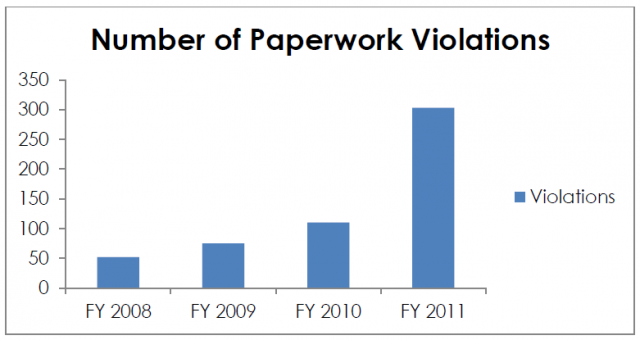 This expanded methodology vaulted Defense over HHS in the most recent fiscal year, but as the results show, HHS has been a serial offender.  In FY 2010 alone, Secretary Sebelius’s department managed ten times more violations than the second highest offender, the Department of Veterans Affairs.

HHS has received significant criticism for its implementation of the Affordable Care Act (ACA).  With dozens of regulations on the books, it has already created significant delays and errors.  The department has made more than 149 corrections to ACA regulations.  In addition, there are still dozens of overdue regulations, with many more remaining in 2013.

This regulatory backlog has resulted in more than 150 violations of the PRA and a burgeoning regulatory apparatus that now imposes 621 million hours of paperwork, the equivalent of 311,000 employees working 2,000 hours a year.  HHS lacked the legal authority to compel the collection of information, but still imposed the paperwork.  The White House’s own FY 2010 report noted that HHS drives a majority of PRA offenses, “This increase is largely driven by the 65 PRA violations from Department of Health and Human Services, which represents nearly 60 percent of total violations.”  The report defensively noted that the violations produce less than one percent of the overall paperwork burden.  However, the 65 violations in FY 2010 represented 5.4 percent of HHS’s total, the equivalent of 29.2 million paperwork burden hours that the agency illegally collected.

A few of these illegal collections are associated with ACA implementation.  Seven collections of information, including rules for health care exchanges, total more than 707,000 hours of paperwork and $13.6 million in costs.  HHS allowed the collections to lapse but continued to collect information without legal authority.

In the PRA there are certain “Public Protections” but, of course, no penalties for agencies that fail to comply with the law.  Although there are no pending legislative measures intended to enforce compliance among agencies, there are companion bills in the House and Senate that protect small businesses.  The “Small Business Paperwork Relief Act” (S. 97), sponsored by Senator David Vitter, and H.R. 1321, sponsored by Representative Tammy Duckworth, would provide relief for first-time offenders.

Currently, the first offense under the PRA can generate substantial penalties for private businesses.  S. 97 and H.R. 1321 would amend the PRA to provide relief against fines for first-time business offenders, “unless there is potential for serious harm to the public interest … or the violation presents a danger to the public health or safety.”

However, Senator Vitter’s bill currently has no cosponsors and Representative Duckworth’s legislation has only five supporters, all of whom are in the minority.  Thus, it appears unlikely that reform of the PRA will become law in 2013.

There are other legal vehicles in government that could disincentivize agencies from violating the PRA.  EPA, for example, is bound by the “Equal Access to Justice Act” (EAJA), which provides financial compensation to groups that successfully challenge a regulation.  As the Government Accountability Office noted, “EAJA thus allows payment of the attorney fees and other costs if the organizations sought review of a government action and prevailed.”

Lawmakers could apply this concept to the PRA.  If a business or individual challenges a collection that has lapsed or was obtained illegally, the agency would have to provide equitable compensation for the time and money spent during compliance.  For example, if businesses did spend more than 262,000 hours complying with exchange regulations (noted above) and successfully challenged the illegal collection, HHS would be required to remit $13.1 million for its violation.

In sum, the list of reform measures to strengthen the PRA might be short, but the parade of violations is hardly brief.  Agencies, especially HHS, routinely violate the law. Whether these offenses are willfully committed or innocently result from losing track of thousands of collections, lawmakers should examine agency motives and the nation’s overall paperwork burden.