Nearly two years ago, the Affordable Care Act (ACA) implemented a new individual insurance marketplace, along with the promise of stability and affordability. The new individual marketplace was to rival that of the employer sponsored insurance (ESI) marketplace in stability and predictability, while premiums were to rise at rates much lower than the historical average. This paper seeks to evaluate the degree to which these promises have been fulfilled heading into year three. In this study we find that the cost of both the benchmark Silver plan and the lowest cost Bronze plan will increase by 10 percent in 2016.

The primary sources of data for this report are the 2014, 2015, and 2016 individual market medical landscape files that are available through the Centers for Medicare and Medicaid Services (CMS). These landscape files contain data on the health insurances plans that were offered through the federally-facilitated or federal-state partnership exchanges, which include 36 states in 2014, 37 states in 2015, and 38 states in 2016—only 35 states are included in all three datasets.

Breakaway Policy and the Robert Wood Johnson Foundation maintain a dataset on Silver plans offered in all states in 2014, which we use to calculate premiums for 2014 benchmark Silver plans in non-federal exchange states. In order to obtain information on 2015 and 2016 silver plans that were not included in the data available through CMS, we use plan compare tools on state-based exchanges where they are available. Overall, we analyze data on 2014, 2015, and 2016 Silver plans for 43 states, which account for 461 of the 501 rating areas nationwide. Our estimates on the number of health insurance issuers in a given rating area are also based on Silver plan data.

We use plan compare tools on state-based exchanges to obtain information on 2015 and 2016 Bronze plans not included in the federal data. However, we were unable to include data on 2014 Bronze plans offered outside of federally facilitated or federal-partner exchanges. As a result, our analysis of Bronze plans is restricted to the 36 states that were included in the federal exchange data in 2014, which account for 407 of the 501 rating areas nationwide. In computing average effects across rating areas, we calculate a weighted average of the effects in each rating area using the potentially eligible population. The potentially eligible population is defined as the number of individuals who are either uninsured or insured through the individual market, ineligible for Medicaid or the Children’s Health Insurance Program, and determined to be a legal resident. We estimate this population using the 2010-2012 American Community Survey. All of the premium estimates in this report are based on those offered to a 27-year-old non-smoker. Unless otherwise noted, the premium changes do not include any subsidies that are available for middle-to-low income households. In our analysis of subsidized 2014 benchmark plans, we consider the post-subsidy premium for a 27-year-old non-smoker that earns $30,000 per year. Where we consider the implications for families, we calculate the premium for a married couple of 27 year olds with two children. We also use both the 2014 income contribution scale and 2014 federal poverty guidelines for calculating the premium subsidy for all three years. This is a simplification that ignores a slight increase in both the federal poverty guidelines and the income contribution scale that roughly offset each other in terms of the overall effect on the premium subsidy for an individual whose income does not change. More importantly, we assume that household income remains the same. An estimate that included some increase in income would lead to a reduction in premium subsidy.

Each state market operates under different conditions and costs of health insurance vary between rating areas of different states. There are also a variety of plans within each rating area that consumers can purchase, and the enrollment numbers for each of those plans will fluctuate according to several factors. Additionally, risk protections that were guaranteed by the ACA (a guarantee that has proven empty), the growing pool of insured, and changes in the plans offered can all affect premiums in more indirect ways. Averages mask a lot of this variation; therefore, it is necessary to look at the national insurance marketplace from various viewpoints if any legitimate analysis of premiums is to be made.

While the average cost of benchmark Silver plans serves as a quick way to gauge the cost of health insurance, averages mask variation.  Non-benchmark Silver plans enrolled roughly 59 percent of the marketplace in 2015, while Bronze plans—the cheapest metal level on the market—enrolled about 20 percent. Premiums for the lowest cost Bronze plan have increased by 10 percent between 2015 and 2016, and nearly 14 percent since 2014. Using these lower-cost plans as a judge may give us a better understanding of how people are affected throughout the market because lower cost plans are more likely to enroll those ineligible for subsidies and cost sharing.

Average rate increases disguise substantial variation across the country, which is divided into 501 different rating areas. For example, we estimate that the lowest cost Bronze plans increased by about 10 percent on average while 20 of the 461 rating areas observed saw an average 10 percent decrease. On the other hand, 85 of 461 observed rating areas saw increases of over 25 percent. There is similar variation in the premiums of 2016 benchmark plans as premiums will increase by more than 30 percent in some areas while others will see decreases of to 20 percent or more. 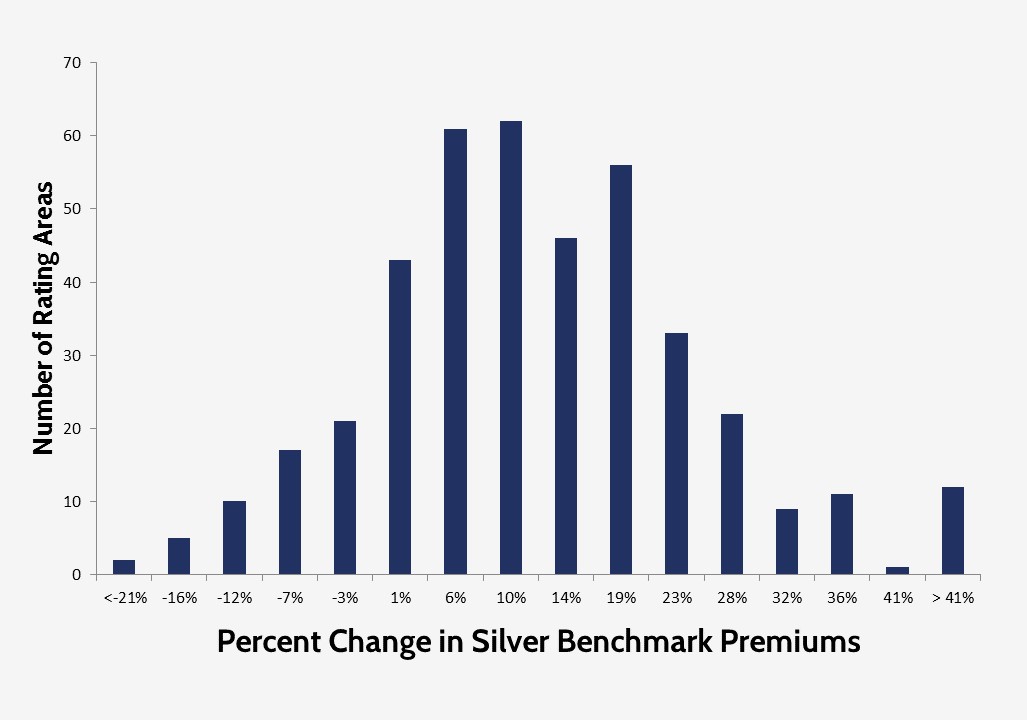 Though averages only tell part of the story, it is noteworthy that the increases in both benchmark Silver plans and lowest cost Bronze plans are already approaching the 8 to 12 percent increases that afflicted the individual market before 2014. Increases of this size were promised to stop under the ACA.

Plan Turnover and its Impacts

Last year, 53 percent of consumers enrolled in a 2014 plan shopped around for a different plan in 2015. This year, the administration is encouraging people to do the same. Those people who do not shop around for a new plan will be auto-enrolled in the plan for which they are currently enrolled or a similar cost plan if their current plan is not available. For example, of those who are currently enrolled in a 2015 benchmark Silver plan many will have to enroll in a new plan in 2016. This turnover in benchmark plans—and all the other plans on the market—is problematic because it affects both premiums and overall cost of insurance as subsidies change accordingly. Another unfortunate outcome of this turnover is the possibility of people being forced to switch health care providers as networks change with plans.

In 321 of the 461 rating areas, the benchmark plan has changed, and many are no longer offered. As mentioned earlier, the average increase in premiums of 2015 benchmark plans was 10 percent, and when subsidies are considered, premiums for those eligible increased 6.7 percent. In many rating areas, a rise in competition—introduced by new entrants and the process of bidding for the benchmark plan—can lead to a decrease in the benchmark premium even as premiums rise for most of the other offered plans. As this happens, many people in those rating areas will see premiums grow while subsidies decrease. In areas where there are only two insurers, average benchmark premiums increased by 13 percent while premiums increase by 8.3 percent on average in those areas where there were more than two insurers.

In the employer sponsored insurance market, consumers can expect a consistent premium growth average of 6 percent without needing to worry about switching plans year to year. The change in benchmark plans from year to year also indicates the high level of flux in the market.  This too illustrates the amount of uncertainty consumers face with an unstable market.

It is important to remember that the current marketplace structure provided by the ACA is relatively new. In many ways, the health insurance marketplace is just as unpredictable as it was a year ago. In regards to cost, it is marked by disparities between states and rating areas. There is still a significant amount of movement among insurers as they enter and exit markets, introduce new plans, and remove old plans. Because of these factors, it will still take time to pinpoint the underlying cost growth in the individual market.

Executive Summary There are about 8.6 million immigration benefit applications pending before the United States Customs and Immigration Service, of…