The Consumer Price of Regulation

American Action Forum (AAF) research finds that 36 regulations issued during the Obama Administration will increase consumer prices by more than $11,000. From higher priced vehicles, pricier household goods, to more expensive food, the cumulative effect of regulation has profound implications for consumers and the broader economy.

For example, the Environmental Protection Agency (EPA) and the National Highway Traffic Safety Administration (NHTSA) acknowledge that consumer prices will increase from recent vehicle efficiency standards. In just one of the earlier rules, for Model Year 2011 vehicles, NHTSA admitted passenger cars and light truck prices would increase by $91.

AAF recorded any instance of an agency quantifying consumer price increases and then divided these increases into six areas:

From these six areas, AAF estimated the increased cost a consumer would pay because of the regulation. For some regulations, analyses simply listed the price increase. For others, namely energy efficiency standards, AAF had to compare the average installed price of new units to the baseline, pre-regulation cost. In instances where a regulation controlled several different product classes, AAF averaged these cost increases. Sofie Miller’s work at the GW Regulatory Studies Center also supplemented the research on increasing product prices. 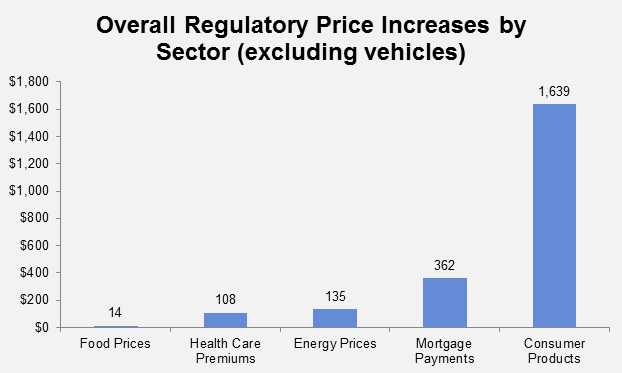 This class had the largest number of covered products: from dishwashers ($44 increase), to clothes washers ($18 increase) and refrigerators ($83 increase), there are few electronic household devices that have not been regulated recently. The administration has finalized more than a dozen “economically significant” Department of Energy regulations during the past five years. Many of these measures admit consumers will pay higher prices, but if purchasers keep goods for a certain “payback period,” lower energy costs will result in net gains.

Combined, regulations will increase the cost of consumer goods by up to $1,600. Below are the more notable items that consumers can expect to pay higher prices for in the future.

There are four notable regulations that will force consumers to pay more at the grocery store. The largest by far, is the result of the renewable fuel standard. According to an EPA analysis, higher commodity prices would increase food prices by “roughly $10 per person per year.” Combined, four recent regulations will increase food prices by approximately $14, including higher prices for eggs and sugar.

Increasing the cost of a mortgage is the most glaring area where agencies provided only qualitative analysis or simply omitted any extensive discussion of how regulation could increase costs. AAF found only two rules, out of hundreds of Dodd-Frank and other notable rules, which explicitly mentioned they could increase mortgage costs. The largest, “Appraisals for Higher-Risk Mortgage Loans,” requires creditors to obtain an appraisal and provide applicants a copy of written home appraisals. The agencies estimated this appraisal would cost roughly $350 and could be passed on to consumers.

The other notable rule increasing mortgage costs is actually from EPA. The rule, Effluent Limitations Guidelines, could increase monthly mortgages from $1 to $29, depending on the regulatory alternative. AAF used the $1 figure; thus, annual mortgage costs increase by $12, for a combined $362 increase for these two rules.

EPA has also “missed the forest for the trees” in its analysis of recent power sector regulations. Although it has acknowledged that some of its rules could increase utility bills, the agency has always been careful to note price spikes are “small relative to the changes observed in the absolute levels of electricity prices over the last 50 years.” However, when combined with four other regulations, variations are no longer trivial. For one rule, “Utility MACT,” the price increase was 3.1 percent.

EPA also issued the Cross-State Air Pollution Rule (CSPAR), which could increase retail electricity prices “by about 1.7 percent.” Although the 3.1 percent spike from Utility MACT might seem trivial, with CSAPR, consumers could now face a 4.8 percent increase. During the year, the average consumer could pay approximately $71 more in energy costs because of these two rules.

However, that’s not the end of high energy prices. EPA recently finalized its Tier 3 emission standard rule, which would lower the sulfur content in gasoline to 10 parts per million, from 30 parts per million. The agency noted it would slightly increase vehicle prices (noted below), but it would also impose costs on refiners, which would then be passed on in the form of higher gasoline prices. The price increase is less than a cent per gallon, but the per capita impact during the year is roughly $3.00. In total, consumers can expect to pay $135 annually in higher energy prices from just a handful of recent rules.

Two Affordable Care Act rules, coverage for preventive services and preexisting conditions, will increase annual premiums by more than $87. In the preventive services rule, the administration conceded that, “Premiums will increase by approximately 1.5 percent on average.” In the preexisting conditions rule, the administration admitted premium increases could vary from 0.2 percent to as high as 6.6 percent. The average projected increase was 1.9 percent, the figure AAF used to calculate the $49 annual impact of the rule.

Finally, a 2013 rule implementing the Mental Health Parity Act is also likely to increase premiums. According to the administration, new coverage “could be expected to lead to an increase of 0.8 percent in premiums.” Combined with the 1.9 percent and 1.5 percent increases in other rules, patients now face premium increases of 4.2 percent. This represents just three regulations out of dozens that have the potential to raise prices. Combined, these rules will increase annual premiums by more than $108.

In total, 36 recent regulations increased consumer prices by more than $11,100. For vehicles, prices jumped by more than $9,100, the vast majority of the sample’s increase. The $9,100 figure includes three major rounds of fuel efficiency standards, which increased prices by approximately $2,800. It also includes three safety standards, which added $287, and Tier 3 sulfur emissions standards, which will contribute $72 to higher vehicle prices. However, the largest increase, $6,000, is from a “typical combination truck/tractor.” An average consumer will be forced to pay more than $3,100 for a vehicle due to regulation, but some consumers could spend far more because of these new rules. 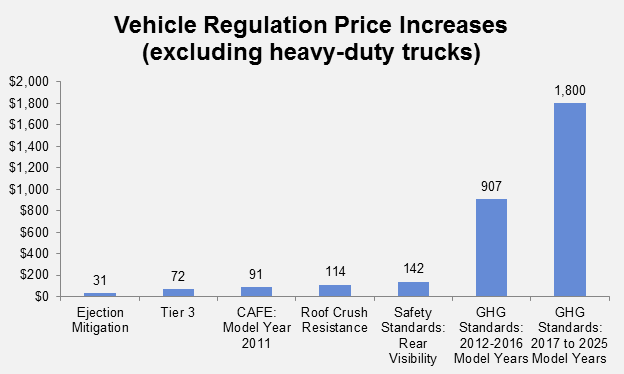 In EPA’s most recent fuel efficiency regulations, the agency concluded, “There is broad consensus in the economic literature that the price elasticity for demand for automobiles is approximately -1.0.” Thus, a one percent increase in vehicle prices results in a one percent decrease in sales. A combined $3,100 price hike for vehicles could decrease vehicle sales by up to ten percent, resulting in billions of dollars in lost sales and fewer jobs.

Beyond higher consumer prices and lessening demand, there is a possibility that consumers won’t want the newly regulated products, either because of price or preference. The Department of Energy noted that new light bulbs “may result in consumers’ unwillingness to purchase them.” Consumers also might simply continue to use their less efficient current products, rather that purchasing more expensive items. For CAFE, economists Mark Jacobsen and Arthur van Benthem estimate 13 to 23 percent of “the expected fuel savings will leak away through the used vehicle market. This considerably reduces the cost-effectiveness of the standard.”

$11,000 in higher consumer prices is a striking figure, but this represents just 36 recent rules. In addition, federal agencies provided all the data and there are certainly higher outside estimates. Regardless of the final figure, it’s clear that federal regulations increase prices for every consumer. Although companies typically comply with new rules, consumers must often pay the bill.

Executive Summary There are about 8.6 million immigration benefit applications pending before the United States Customs and Immigration Service, of…