The Costs of a Broken Immigration System on American Business

When the American Action Forum (AAF) analyzed the total costs of the immigration system, we found close to $30 billion in annual regulatory compliance costs. The specific toll on American employers is just as significant and these burdens increase the cost of doing business and place a barrier to firms hiring qualified workers. AAF found that a hypothetical firm hiring an immigrant would have to manage up to six federal forms, totaling 118 pages, and at a cost of approximately $2,200 per firm, per hire. For some small businesses, this amounts to a “regulatory tax” of 3.6 percent.

As with AAF’s previous study on the total costs of the immigration system, we examined paperwork requirements via the Office of Information and Regulatory Affairs (OIRA). We found 20 requirements that dealt specifically with the labor implications of hiring an immigrant worker. Of this sample, there were seven paperwork burdens that specifically applied to employers. AAF used agency estimates on the amount of time for each requirement, the number of forms, length of applications, and number of applicants. When an agency failed to provide a cost for the paperwork burden, AAF used the Department of Labor’s estimate of “Real GDP Per Hour Worked:” $60.59. For the cost of an immigration attorney, AAF assumed $180 per hour.

Before hiring an immigrant with H-1B or H-2B status, the Immigration and Nationality Act requires employers to verify that a foreign worker will not adversely affect the wages and working conditions of U.S. workers comparably employed. To comply with the statute, the U.S. Citizenship and Immigration Services (USCIS) rules require that the wages offered to a foreign worker must be the prevailing wage rate for the occupational classification in the area of employment.

The prevailing wage rate is defined as the average wage paid to similarly employed workers in a specific occupation in the area of intended employment. Effective January 4, 2010, employers can obtain this wage rate by submitting a request to the National Prevailing Wage Center, or by accessing other legitimate sources of information such as the Online Wage Library.

Employers must submit this prevailing wage determination at least 60 days in advance of the “initial recruitment efforts.” Every year, employers submit more than 890,000 applications, for a total national cost of $24 million. According to USCIS, the four-page form should take employers slightly less than one hour to complete. Yet, even after submission to the federal government, the wait time can last up to two months.

Once recruitment efforts have started, the largest employer burden, in terms of time spent on each requirement, is the I-129 form, or the “Petition for Nonimmigrant Worker.” Every year, USCIS receives more than 333,800 responses from businesses for this form, for a total time of 1.6 million hours. The reported annual cost is $128 million. Doing the math, this means that the average business spends roughly five hours on this 36-page form and almost $80 per hour completing it. For employers who forgo the assistance of an attorney, they must negotiate the instructions for form I-129, which are 29 pages.

Any employee that does eventually get hired with then have to face the E-Verify program or the I-9 form, “Employment Eligibility Verification,” which the employer also manages. The I-9 form, which virtually all Americans must complete, generates 176 million submissions to USCIS annually, for a total of 40.6 million hours of paperwork. The federal government doesn’t monetize the cost of this single form, but applying the figure for real GDP per hour worked yields roughly $2.4 billion in aggregate burdens, about the GDP of Aruba.

The contentious E-Verify program, run primarily by employers, is the most burdensome requirement in terms of pages, at 50. Annually, employers submit more than 23 million forms, which takes about 3.5 million hours. The time per E-Verify submission is 3.6 hours. Obviously, for a business that must submit several forms, the time and economic burden can escalate quickly.

The H-1B program employs workers with specialized knowledge, including scientists, engineers, and computer programmers. Unfortunately, for businesses seeking to hire skilled workers, there is a cap of roughly 65,000 H-1B Visas annually and demand for these employees is high.

For employers who brave the process, they’ll need to submit an application for an H-1B immigrant. Despite the 65,000 cap, USCIS receives more than 340,000 responses annually, for a total of 310,000 hours. According to the federal government, each form takes an hour to complete. USCIS does not monetize the employer burden to complete this information, but assuming $60.59 per hour yields a total cost of $18.7 million.

Once the paperwork is submitted for employers and potential U.S. workers, the wait time for this process varies from eight weeks, to more than six months. The average wait time is roughly 250 days, depending on the processing center. This significantly increases the cost of hiring skilled workers in the U.S.

The H-2B program allows employers to hire temporary, non-agricultural employees. Like its sister H-1B Visa, the H-2B program also has a federal cap: 66,000 per fiscal year. However, there is an internal quota as well, as no more than 33,000 can be filled in the first half of the fiscal year, with the remainder in the second half of the year.

Employers interested in H-2B immigrants must submit an application, which totals only six pages. Amazingly, USCIS estimates that employers will spend 2 hours and 45 minutes completing the form, but this will cost businesses just $1 an hour. For the entire application, it estimates annual costs of $19,000, although many burdened employers across the nation would likely disagree with that estimate. Once the application process is complete, the waiting game remains. The national average wait time for a H-2B Visa is one month according to USCIS.

Stepping back from the macro-level view of national paperwork burdens on businesses, hiring a foreign worker under current law is a complicated, costly procedure for an individual employer. While the general steps may seem similar to hiring a domestic employee, many of the aforementioned forms and requirements add layers of complexity and cost. The following is an abbreviated examination of the issues, questions, and procedures an employer must address when hiring a foreign worker.

1.      First Step: Hire a lawyer. While this may not be as much of an issue for larger employers with scores of compliance staffers and attorneys attune to immigration law, many smaller employers will need help to avoid some of the pitfalls of the process. Even minor, honest mistakes can leave a company or employer open to serious legal issues. AAF assumes a typical immigration attorney charges $180 per hour.

2.      Second Step: Interview and Assess Prospective Employee. Prior to seeking applicants, an employer must take approximately an hour to make the wage declaration described above. Much as one would for any employee, an employer would hold an interview and check references. However, holding an in-person interview likely involves more complicated travel arrangements, including possibly acquiring a visitor Visa (a process that can take multiple days). In addition, assessing the applicant’s background and prospective job responsibilities is particularly crucial to the next step.

3.      Third Step: Determine and Petition for Employee Status. This is the stage where an employer has to determine what kind of Visa is appropriate for a prospective employee. Part of this involves completing the 4.8 hour-long I-129 form. Under this process, there are several types of Visas that could apply to the prospective employee. The H-1B and H-2B visas are the most well known; these would take an employer roughly one to 2.75 hours, respectively. Even the offer letter extended to the prospective employee needs careful wording to align with these reports. For instance, here is the template prescribed by the University of Michigan’s International Center hiring practices.

4.      Fourth Step: Hiring and Verifying Employee. Finally, once the prospective employee becomes an actual employee, the employer must verify their legal status. As mentioned above, the I-9 and E-Verify process takes roughly 3.6 hours. What’s described here is only for a temporary worker. Those employees and employers that seek permanent residency at some point must undertake an entirely different process. 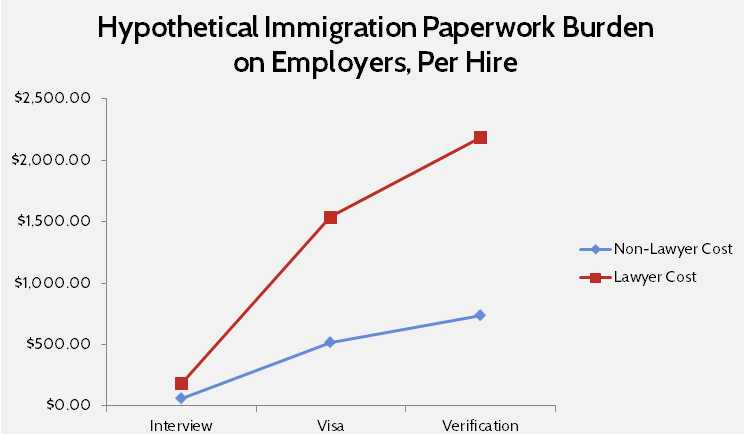 Total Cost: Even without counting the potentially months-long wait times for government approvals, the process of simply filling out forms for a single hire could take more than 12 hours, depending on the type of Visa. Burdens for this time translate from $727 to $2,187. In other words, because of federal regulations, hiring a single immigrant worker acts a regulatory tax of approximately 3.6 percent for small firms.