The Cumulative Impact of Regulatory Cost Burdens on Employment 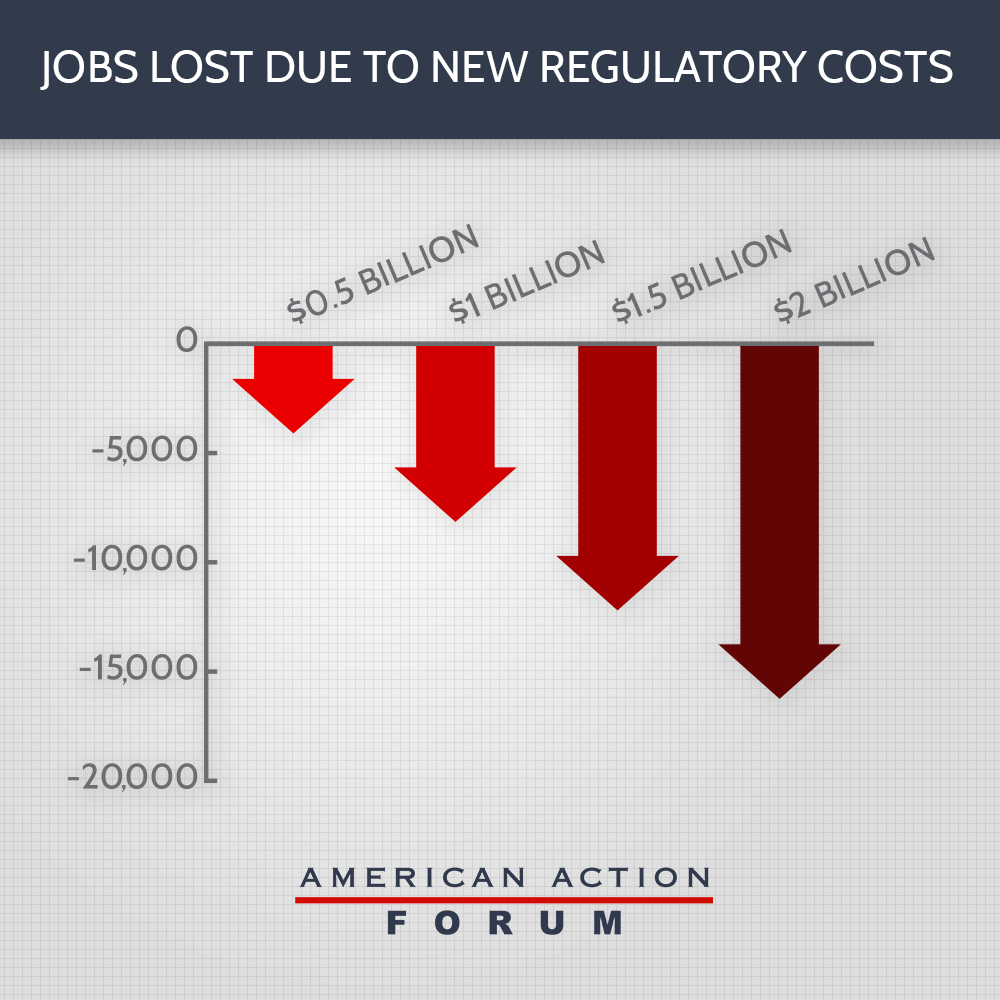 This study examines the employment levels of 44 industries from 2001 to 2012, the period the Bureau of Labor Statistics made available for data. The sample of 44 industries accounted for approximately nine percent of total private employment in 2012. Instead of examining only large regulations, or rules that only affect small businesses, AAF recorded all final rules between 2001 and 2012 that agencies admitted would affect certain industries. Below are the 44 industries, paired with their North American Industry Classification System (NAICS) code.

Other studies have focused primarily on the relationship between employment and compliance with environmental regulations. However, AAF’s sample represents a cross section of industries, from day care services, to hospitals, drug stores, and the manufacturing industry. These industries were regulated by more than just one agency. AAF’s sample contains regulations from ten different federal agencies.

From 2001 to 2012, regulatory impact analyses from these agencies indicate there were 148 regulations that affected the 44 industries in the sample. AAF’s previous studies examined only eight and 17 rules, respectively. The rules evaluated in this study range in cost from a few thousand dollars annually, to more than $10.8 billion per year.

As in its previous papers “Cumulative Impact of Regulation and Employment” and “Billion-Dollar Regulations: Trends and Employment Implications,” AAF does not assume all regulations are created equal, particularly with respect to employment. While some regulations may have negligible effects on an industry, others may be more substantial and several regulations together could cumulatively have large effects. Previously, AAF focused on regulations presumed to have the largest industry impacts and evaluated how these “economically significant” or “billion-dollar” rules cumulatively impacted employment. In doing so, AAF employed binary variables to examine the cumulative impact of the number of new regulations on an industry.

Since not all regulations are the same in estimated cost and design, perhaps the best way to measure the impact of regulations on employment is to estimate how the cumulative projected costs of all regulations relates to job levels. Thus, this analysis examines the how the annual cost of several new regulations impact industry employment.

Using these data, AAF performs a fixed effects cubic regression to estimate the effect of an increase in regulatory costs on the natural log of employment. AAF uses a cubic regression and natural log of employment to address a nonlinear relationship between industry employment and cumulative regulatory costs. In addition, the use of fixed effects controls for characteristics that vary across industries, but not over time. To account for macroeconomic forces that change over time, such as the loss in employment due to the Great Recession, AAF controls for year. In addition, to account for changes in prices over that time, AAF controls for industry chained Consumer Price Index. Also, any fixed effects model can face the problem of autocorrelation, in which a variable is correlated with itself over time and biases the results. AAF’s model addresses this issue by using heteroskedasticity-and autocorrelation-consistent standard errors.

Below is the specific regression model:

The subscripts i and t denote the industry and year of the observations, respectively. There are three variables representing regulatory cost burden, including Cost, Cost2, and Cost3. ChainedCPI represents the annual average chained Consumer Price Index, which is reported by the Bureau of Labor Statistics. Finally, each Yr variable is a binary variable (0 or 1) representing the year of an observation. Yr2 equals 1 when the year is 2002 and Yr12 equals 1 when the year is 2012.[1]

The cumulative regulatory cost burden is associated with a statistically significant reduction in industry employment.

Interestingly, the result yielded in this study is somewhat consistent with, but more conclusive than, what AAF found in the previous paper, “Billion Dollar Regulations: Trends and Employment Implications.” In that paper, AAF found that one $1 billion regulation was associated with a 3.0 percent decrease in employment. However, that result was statistically insignificant. In contrast, the results in this paper are slightly larger in absolute value (3.6 percent decline in employment for every $1 billion in new regulatory costs) and statistically significant. This perhaps underlines that the impact of regulations on employment is more associated with the actual cumulative cost of the new regulations than their mere existence.

[1] To avoid perfect multicollinearity between the binary variables (otherwise known as the dummy variable trap), Yr1, which equals 1 for 2001, is purposefully absent from the model. As a result, all year binary variables are measured relative to Yr1.