The U.S. tax code is outdated and internationally uncompetitive, which discourages companies from locating headquarters in the U.S. Further, as long as this uncompetitive tax regime persists, current U.S.-based companies are both targets for purchase by international competitors or induced to relocate overseas. Past legislative efforts have curbed the practice of relocating to overseas tax havens for pure tax purposes (so-called “naked” inversions).

More recently, inversions have been proposed in the context of cross-border mergers and acquisitions, such as the merger of Tim Horton’s and Burger King, or Medtronic and Covidien.  In these instances, the fundamental incentive to merge is driven by global market considerations and the intrinsic business case for the merger or acquisition.  However, once the decision is made to merge, the inversion offers the U.S. firm easier access to overseas earnings and the potential to reduce its tax burden.

As long as foreign markets continue to grow, and the U.S. maintains a comparatively uncompetitive code, the incentive to relocate headquarters abroad will remain.  Worse, recent policy proposals that ignore this reality will further harm U.S. competiveness and jobs.  Although highly uncertain, the analytics suggest that recent anti-inversion proposals could put 42,000 U.S. jobs at risk.

The United States has the highest corporate tax rate among all major developed economies. The U.S. corporate tax rate is largely unchanged since 1986, when a significant rate reduction was enacted.[2]  Prior to 1986, the U.S. levied corporate taxes in excess of the Organization for Economic Cooperation and Development (OECD) average. By 1988, when the 1986 reform was fully implemented, the combined U.S. statutory rate had fallen below the OECD average.  Since then, the U.S. has become steadily less competitive as other countries lowered their rates.

While statutory tax rates are critical to firm investment and location decisions, other measures of corporate taxation also warrant consideration.[3] A firm’s effective tax rate includes other facets of the corporate tax code, such as credits and deductions, which figure in the determination of a firm’s tax burden. While less stark than top statutory rates, an international comparison of effective corporate rates still paints the U.S. in an unfavorable light. According to a study by PricewaterhouseCoopers, “companies headquartered in the United States faced an average effective tax rate of 27.7 percent compared to a rate of 19.5 percent for their foreign-headquartered counterparts. By country, U.S.-headquartered companies faced a higher worldwide effective tax rate than their counterparts headquartered in 53 of the 58 foreign countries.”[4]

The United States fails another competitiveness test in the design of its international tax system. The U.S. corporation income tax applies to the worldwide earnings of U.S. headquartered firms. U.S. companies pay U.S. income taxes on income earned both domestically and abroad, although the U.S. allows a foreign tax credit up to the U.S. tax liability for taxes paid to foreign governments. Active income earned in foreign countries is generally only subject to U.S. income tax once it is repatriated, giving an incentive for companies to reinvest earnings anywhere but the U.S., owing to its high corporate tax rate.

This system distorts the international behavior of U.S. firms and essentially traps foreign earnings that might otherwise be repatriated back to the U.S.

While the U.S. has maintained an international tax system that disadvantages U.S. firms competing abroad, many U.S. trading partners have shifted toward a territorial system; that system exempts entirely, or to a large degree, foreign source income. Of the 34 economies in the OECD for example, 26 have adopted such systems, including recent adoption by Japan and the United Kingdom.[5]

Maintaining the U.S. worldwide system compounds the incentive for firms to keep earnings offshore in the face of high domestic rates. The combination of high rates and an increasingly outmoded worldwide tax system disadvantages U.S. firms abroad, where market opportunities are growing.

The 1990’s and early 2000’s saw a series of corporate “expatriations” whereby U.S. firms re-domiciled abroad to reduce their tax burden.  This phenomenon was the subject of Congressional hearings and attention from the Bush Treasury Department.[6] The American Job Creation Act of 2004 (AJCA) included important anti-inversion measures that remain in force today. The AJCA sought to preclude the “top-tier” foreign corporations from tax benefits as a result of the inversion transaction unless the transaction met certain criteria – the goal being to limit the benefits of purely tax-driven expatriations without undue infringement on business activity.

One of the key determinations for being subject to the strictures of the AJCA anti-inversion measures is the ownership stake of the top-tier entity by the formerly U.S.-domiciled corporation. Under current law, the foreign top-tier entity would not be recognized as a foreign corporation for tax purposes if the original U.S. shareholders own 80 percent or more of the foreign corporation (the “80 percent test”). The AJCA also imposes lesser sanctions if the original shareholder ownership stake in the foreign, top-tier entity is at least 60 percent but less than 80 percent (“60 percent test”). For transactions meeting these criteria, the foreign domicile of the top-tier entity is recognized, but certain tax benefits (for example offsetting losses) are denied.[7] For example, when U.S.-based Eaton merged with Ireland-Based Cooper to form Eaton Cooper, Eaton shareholders held a 73 percent stake in the new entity.[8] Lastly, under current law, a company must have a “substantial business presence” in the company in which the new top-tier entity is domiciled. Through the regulatory process this definition has expanded from 10 to 25 percent of firm’s employees, group assets, and group income.[9]

The president’s FY2015 budget, and the House and Senate Levins have all proposed measures that they argue would staunch such expatriations. Among other provisions, these proposals would reduce the proportion of corporate shares that a U.S. company may own of a foreign entity to be considered as a foreign-domiciled firm. At present this stands at 80 percent, while these proposals would reduce it to 50 percent. As a result, if, under an expatriation transaction, the original shareholders have a majority stake in the foreign, top-tier corporation, that corporation is viewed as a domestic corporation for tax purposes. It is important to note that Senator Levin’s measures sunsets after two years, nominally to provide political “room” for comprehensive tax reform, which is at least a tacit acknowledgment that the U.S. code may ultimately be at fault for these expatriations.

These proposals also share a key feature related to management and control that would ultimately incentivize shipping corporate headquarters jobs overseas. All of these proposals would add a management and control test to the determination of the tax treatment of a firm. Specifically, as the administration notes, “a special rule whereby, regardless of the level of shareholder continuity, an inversion transaction will occur if the affiliated group that includes the foreign corporation has substantial business activities in the United States and the foreign corporation is primarily managed and controlled in the United States.” In essence, if a firm keeps its headquarters in the United States, and continues to do significant business in the States, it will be taxed as a U.S. firm. To the extent the U.S. tax code otherwise incentivizes these firms to expatriate, this test will push these firms a step further – shipping their headquarters off-shore.

One recent estimate on the macro-economic effects of fundamental tax reform, authored by John Diamond and George Zodrow, examined how Chairman Camp’s draft bill would affect capital flows compared to current law.[10] In the long-run, the authors estimated that a Camp-style reform that lowered corporate rates and moved to an internationally competitive divided-exemption system would increase U.S. holdings of firm-specific capital by 23.5 percent, while the net change in domestic ordinary capital would be a 5 percent increase.  It is important to note that these are relative measurements – they are relative to current law. Current law is inducing capital flight. Moreover, to the extent that the rest of the world has reduced its corporate rates and moved to a territorial system, a Camp-style reform may merely move the U.S. to the middle of the pack in terms of its tax climate. Accordingly, the 23.5 percent and 5 percent increases in firm-specific and ordinary stock, respectively, may be interpreted in part as the effect of precluding future tax inversions. 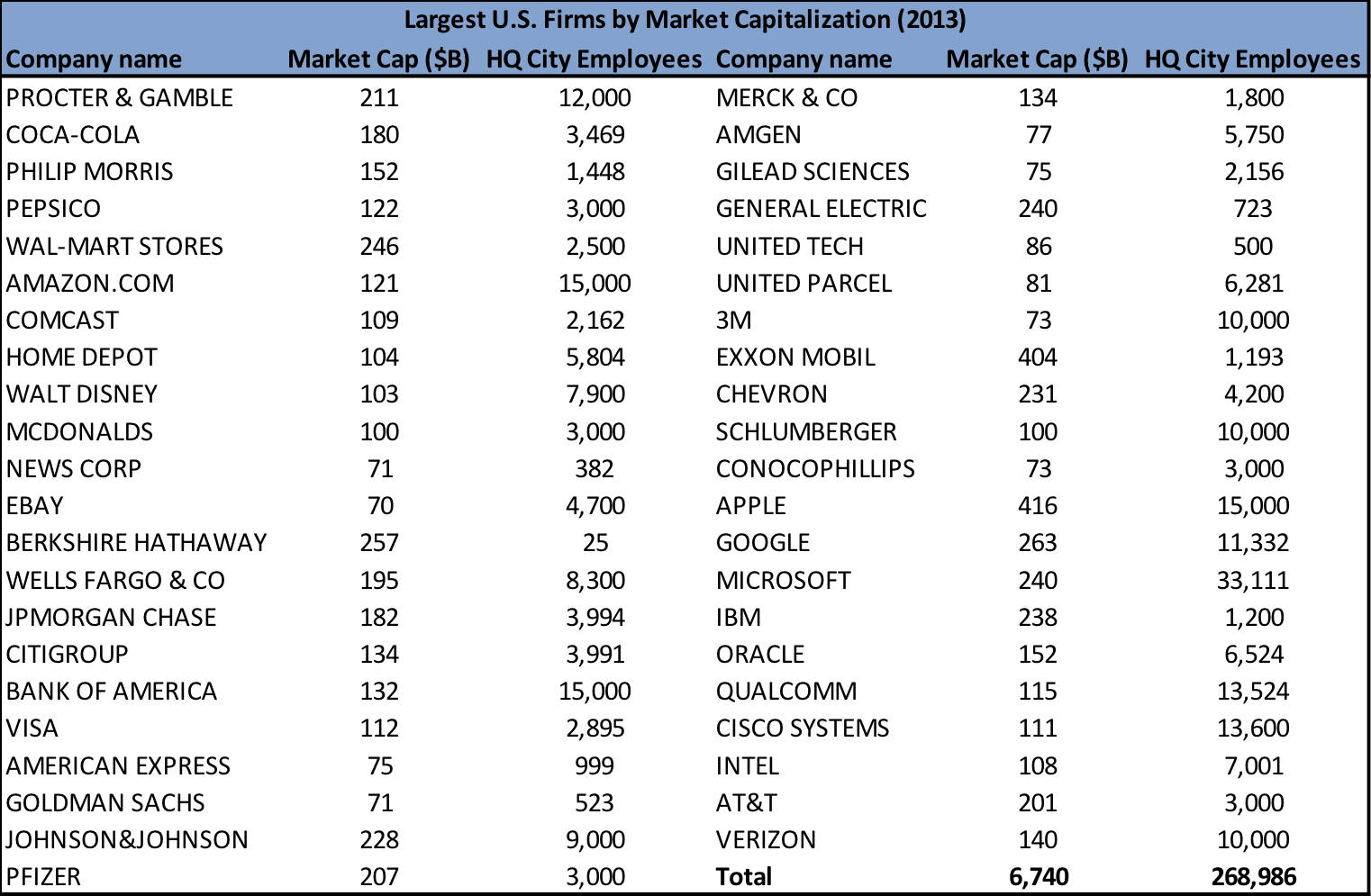 Placing a value on this potential equity flight is uncertain, but based on these estimates, roughly 15 percent, or $988 billion in U.S. based capital is at risk of moving overseas.[11]

To the extent this economic inducement remains by maintaining the current tax code, anti-inversion laws that include management and control tests would push the capital overseas and headquarters jobs would follow suit. The largest American firms have nearly 299,000 headquarters employees, many of which would be at risk for having their positions relocated abroad. If roughly 15 percent of U.S. based market capital is at risk, it suggests a proportional overseas relocation of 42,000 U.S. jobs.

[11] Note, this is based on PWC, “Global Top 100 Companies,” June 2013 and is noted as merely instructive and does not attempt to capture total market cap at present.  HQ Employees figures are drawn from public sources available on request. Where otherwise unavailable, HQ employment figures have been estimated based on Collis, David; David Young; and Michael Goold. “International Differences in  the Size and Roles of Corporate Headquarters: An Empirical Examination;” Working Paper 10-044; Harvard Business School; 2008.