Since President Obama took office, his regulators have added $35 billion in unfunded regulatory costs and at least 75 million paperwork burden hours on state and local governments. Regulation of industries or businesses tends to receive a majority of the coverage, but the mandates placed on cash-strapped states and local governments can result in far more profound impacts.

The genesis of recent burdens is easy to pinpoint. In 2010, when the president signed the Affordable Care Act (ACA) and the Dodd-Frank financial reform, the federal government imposed 86 unfunded mandates on state and local governments, easily a modern record. More impactful, however, might have been the seven mandates that exceeded the statutory threshold, which currently stands at $77 million annually. For comparison, from 2002 to 2006, there were only seven unfunded mandates that exceeded the threshold and Congress and the president managed to match that total in a single year. The graph below displays the history of unfunded state mandates according to the Congressional Budget Office. 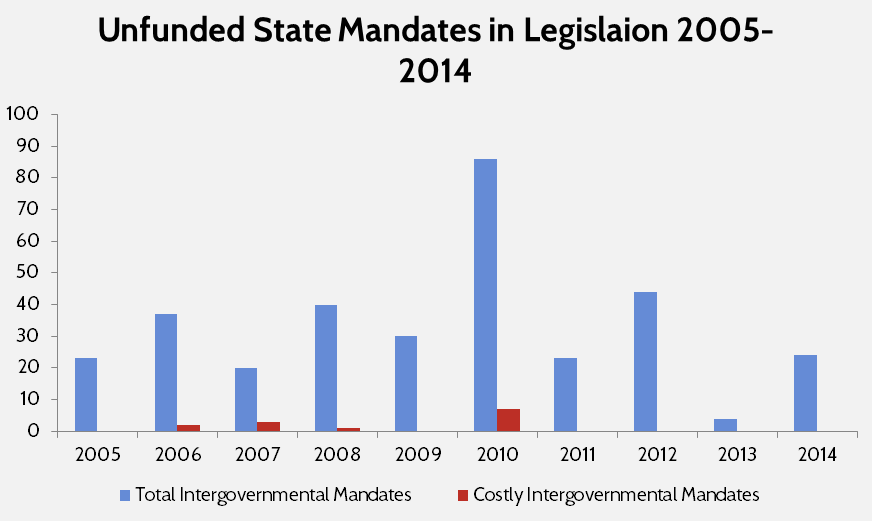 Once the majority party in the U.S. House changed at the beginning of 2011, the number of mandates that exceeded the statutory threshold disappeared, but regulators have slowly been integrating the busy 2010 legislative session into expensive regulations for states and local governments. According to the administration’s math, there have only been 12 regulations that contained substantial burdens on local governments. However, earlier work from the American Action Forum (AAF) found the White House’s search function is not entirely perfect when identifying costly mandates. In one instance, the administration claimed, and still claims, that a $3.2 billion school lunch regulation does not contain unfunded mandates.

Judging from the returns that the White House’s website displays, AAF found $1.7 billion in unfunded state regulatory burdens; but, this is just the tip of the iceberg. RegRodeo.com, AAF’s database that tracks every regulation with a cost or paperwork burden supplements the initial $1.7 billion figure. For example, AAF found an additional $33.2 billion in regulatory mandates on states, for a total burden of $34.9 billion. This figure only examines the largest regulations that impose unfunded state mandates and there are doubtless other rules that impose costs on local governments that might not be counted in these data.

State and local governments cooperating with federal directives employ a small army’s worth of compliance personnel just to handle the paperwork, to say nothing of other capital costs. According to the Bureau of Labor Statistics (BLS), there are 33,600 state compliance officers, whose duties are to ensure conformity with laws and regulations. An examination of federal paperwork requirements on states reveals a motivation for this workforce.

The Office of Information and Regulatory Affairs (OIRA) allows users to search federal paperwork by “affected public” entity. Those complying with federal forms include private industry, individuals, and local governments. For example, of the 9,200-plus federal paperwork requirements, more than 1,900 directly affect states. For this study, AAF only examined paperwork affecting local governments that imposed more than one million paperwork hours.

This query returns a more manageable 78 requirements. The total burden for these paperwork burdens is more than 419 million hours, but some of the forms affect private industries, as well as local governments. Fortunately, OIRA allows users to determine which hours are apportioned to states and which are borne by individuals and industry.

More than half of all hours, 223 million, are imposed directly on state and local governments annually. Per state (including Washington, D.C.) yields a burden of 4.3 million hours. Assuming a 2,000-hour work year, the average state will have to employ 2,187 workers to complete all of the required forms.

The figures above exclude paperwork that imposes less than one million hours, so it’s a conservative figure. For perspective on the price of this time, the federal government reports that this paperwork costs state and local governments $2.2 billion annually. However, there were several paperwork collections that were never monetized. Assuming the average wage for a compliance officer, $32.69, multiplied by 223 million hours, yields an annual compliance burden on states of $7.2 billion. To put this in perspective, all executive agencies reportedly imposed $3 billion in total regulatory burdens in FY 2013. The burden of 223 million hours annually is a tremendous hurdle that states must navigate every year, and unfortunately, the Obama Administration continues to add new regulatory obstacles.

From the sample of 78 paperwork requirements on states, it’s easy to determine which ones were implemented during this administration. The 17 new burdens added by the Obama Administration have added 75.5 million hours of paperwork for state and local governments. By comparison, the Department of Housing and Urban Development imposes just 57 million hours.  This shouldn’t seem like a huge surprise when one considers that the administration recently reported a 362 million-hour paperwork increase from fiscal years 2011 to 2012. Monetizing these 75.5 million hours yields $2.4 billion in new burdens on states since the start of the Obama Administration. With parts of the ACA left to implement and EPA’s pricey ozone and “Waters of the United States” rules on schedule, these burdens will only escalate.

The ACA has played an outsized role driving up burdens for the states. Despite several states’ reluctance to expand Medicaid or create exchanges, according to administration figures, the new burdens on local governments are tremendous. There are six paperwork requirements related to the ACA that impose more than one million paperwork hours on local governments. Combined, these six collections impose 27.1 million paperwork burden hours. In dollars, this translates to about $880 million.

One of the largest culprits for these escalating burdens is the “Essential Health Benefits; Exchanges: Eligibility and Enrollment” requirement. According to the administration, the measure will add more than 12.8 million hours of paperwork and cost $336.9 million annually. Per state (including D.C.), this amounts to 251,000 hours and $6.6 million, for one ACA paperwork requirement.

A similar burden is added through the Medicaid eligibility changes requirement. Administration data reveal that could cost states more than 12.7 million hours. Although they never monetized these time commitments, each state could easily spend 250,000 hours and $6 million, if they complied with the measure.

Burdens on large corporations and small businesses receive plenty of attention in the regulatory world, but it is states that often to have to carry the heaviest load dealing with federal requirements. At $35 billion and more than 75 million hours from the Obama Administration alone, there is a reason that many states employ hundreds of compliance personnel dedicated to navigating red tape. Given recent history, it’s unlikely that these burdens will dissipate soon.