There has been a great deal of attention of late on the state of federal infrastructure spending, in part due to recurring reauthorization of the highway trust fund, and its pending bankruptcy. This report provides an assessment on the state of federal infrastructure spending over time and by function, and notes that while such spending is down of late, current expenditures are roughly on par with historical levels, and outpace depreciation.

According to the Congressional Budget Office (CBO), public spending, including federal, state and local governments, transportation and water infrastructure amounted to $416 billion in 2014, of which $96 billion came from the federal government.[1] In real terms, this reflects a higher expenditure than the historical average of $83 billion. 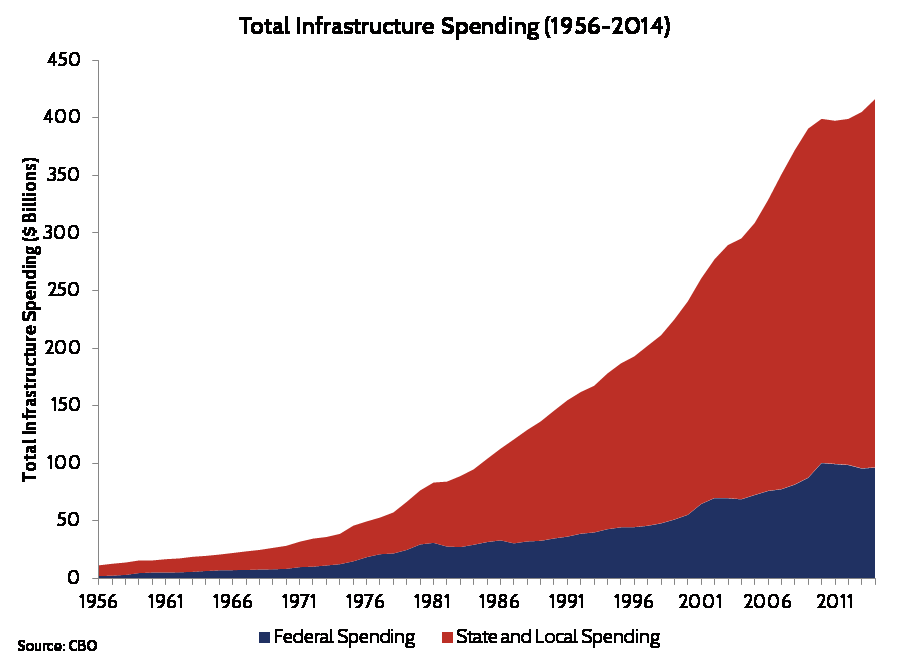 Roughly three quarters of total public spending on infrastructure is expended by state and local governments, net of federal grants – a ratio that has held constant for the last 30 years. 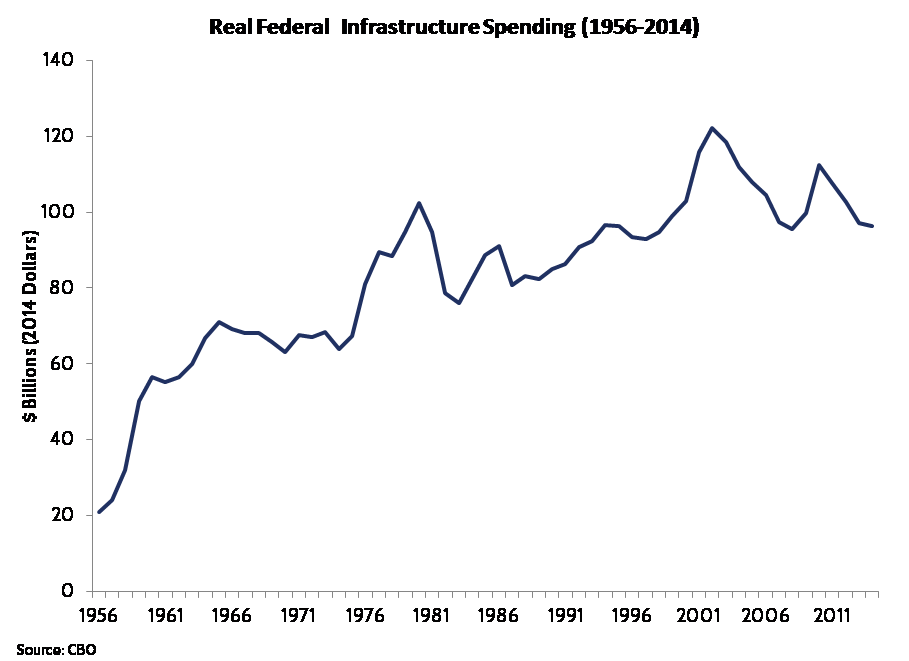 The more recent trend however reflects a decline in real federal expenditures. Between 2003 and 2014, nominal federal spending increased 38 percent, largely due to increases in material prices. In real terms, federal infrastructure spending decreased by 19 percent. 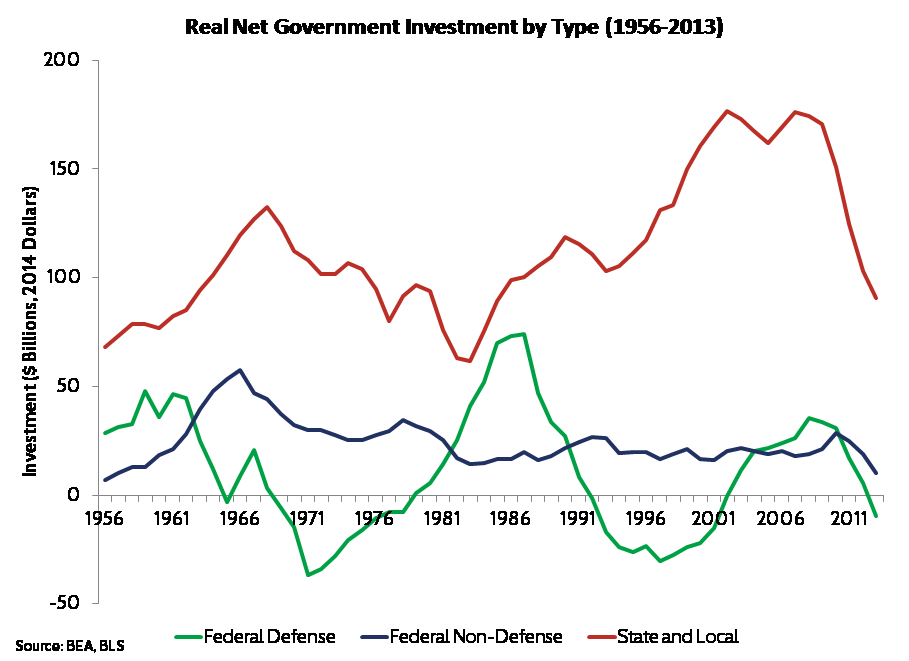 Another measure of federal investment in infrastructure includes the effects of depreciation. By this measure, net federal domestic investment amounted to about $10 billion in 2013. This is roughly half of the 20 year average, though it remains positive, outpacing depreciation.[2] 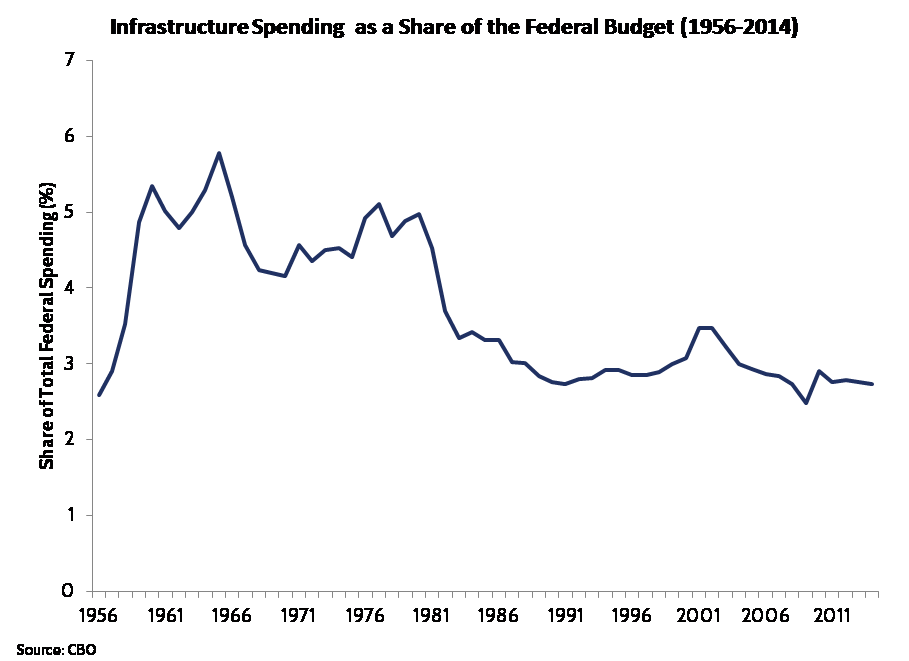 Federal spending on infrastructure can be broadly categorized as either capital expenditures or operation and maintenance expenditures.  Capital spending includes spending for the purchase of new structures, such as roads and sewer systems, and equipment, such as trains and other public vehicle, as well as expenditures for the improvements and modernization of these existing assets.

Operation and maintenance includes the cost of maintenance and upkeep as well as administration of public infrastructure – such as air traffic controllers. Associated education and research and development devoted to infrastructure is also included in this category of expenditure. 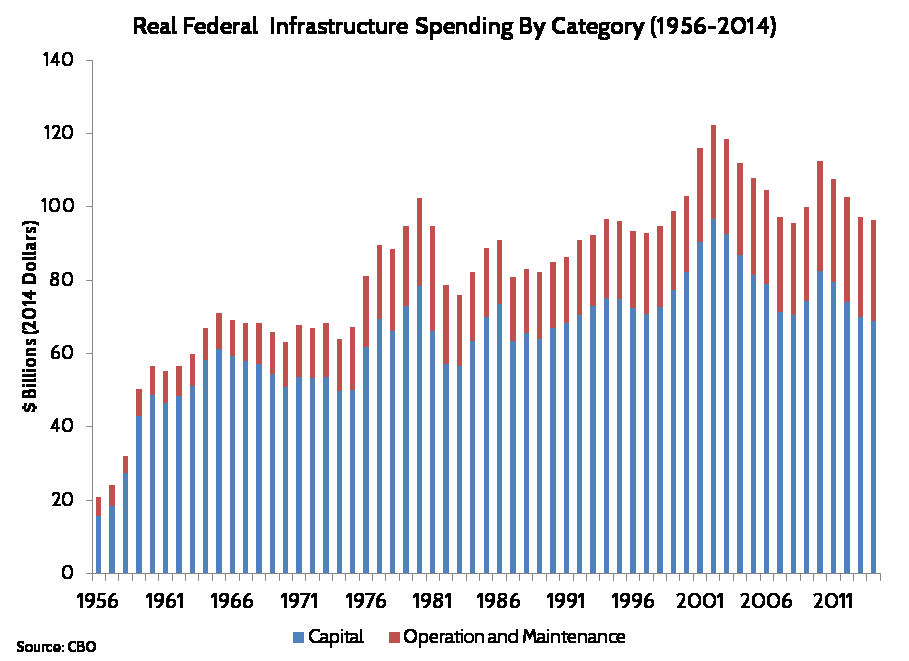 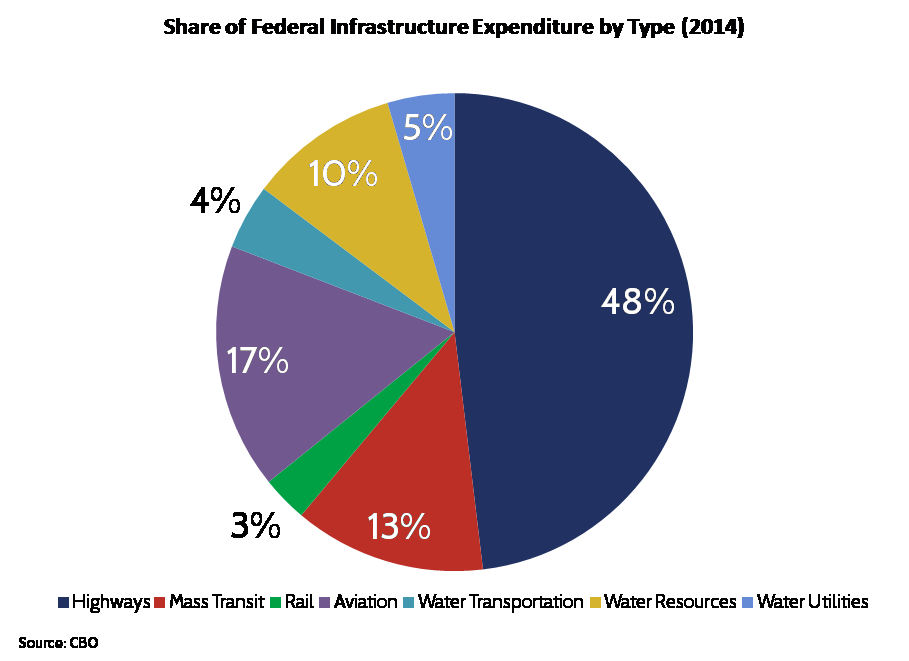 Spending on highways comprised 48 percent of the federal share in 2014, broadly consistent with historical averages. Other types of infrastructure have received varied levels of funding. For example, water resources spending, such as dams and levees, has declined as a share of the budget steadily since 1956, when it was the largest form of federal infrastructure expenditure. The federal government did not invest any funding in mass transit until 1962.

The current disposition of federal infrastructure spending by project type is broadly consistent with the pattern of spending over the last two decades. While state and local governments bear the bulk of public infrastructure costs today, their proportional share of total costs has changed little over the past 30 years.