Union leaders are upset that after helping elect President Obama twice and supporting the Affordable Care Act, they are not getting special considerations. If any American has an offer of affordable employer sponsored insurance, which many union members do as a result of multi-employer “Taft-Hartley” plans, they are ineligible for subsidies. However, these groups are asking the Administration to make an exception and allow taxpayer funded subsidies to flow to union health plans. This special favor would be completely inconsistent with the clear intent of the law and arguably outside the authority of the Administration to enact.  Should the Administration move to accommodate their union supporters, we estimate it would cost nearly $190 billion over 10 years.

A letter written by James P. Hoffa of the International Brotherhood of Teamsters along with other union leaders states, “our employees will be treated differently and not be eligible for subsidies afforded other citizens.” The subsidies to which they are referring are those provided to individuals seeking insurance through the state exchanges and earning between 100 and 400 percent of the Federal Poverty Level.

If these subsidies – designed to help families without employer sponsored insurance – were extended to union workers enrolled in Taft-Hartley plans and their families, it would bring 3 million more households onto the rolls* and cost an additional $16 billion in 2014 alone. If the number of union members in Taft-Hartley plans remains constant, this estimate grows to $187 billion within the first 10 years. 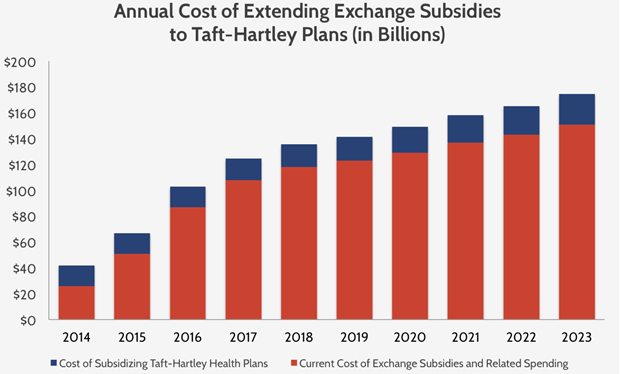 Source: Current subsidy cost and average subsidy cost per household are taken from the Congressional Budget Office and estimates of possibly subsidy eligible union worker households are calculated using data from the Group Health Plans Report issued by the Department of Labor and the Current Population Survey.


*Based on data from the Current Population Survey, we estimate that of the 6 million Taft-Harley health plan enrollees, 3 million are in households earning 100-400 percent of the Federal Poverty Level.