The Budgetary and Economic Outlook for Puerto Rico

Testimony to the Senate Finance Committee

*The opinions expressed herein are mine alone and do not represent the position of the American Action Forum. I thank Gordon Gray, Sarah Hale, and Curtis Arndt for their assistance.

Chairman Hatch, Ranking Member Wyden and members of the Committee, I am pleased to have the opportunity to appear today. In this testimony, I wish to make three basic points:

I will discuss each in additional detail.

The Puerto Rican economy has been in steady decline for over a decade, which has and will continue to exacerbate the Commonwealth’s fiscal challenges. The strict mathematical and practical reality is that any sustainable solution to Puerto Rico’s must involve an economic growth component that boosts output, employment rolls, and income. 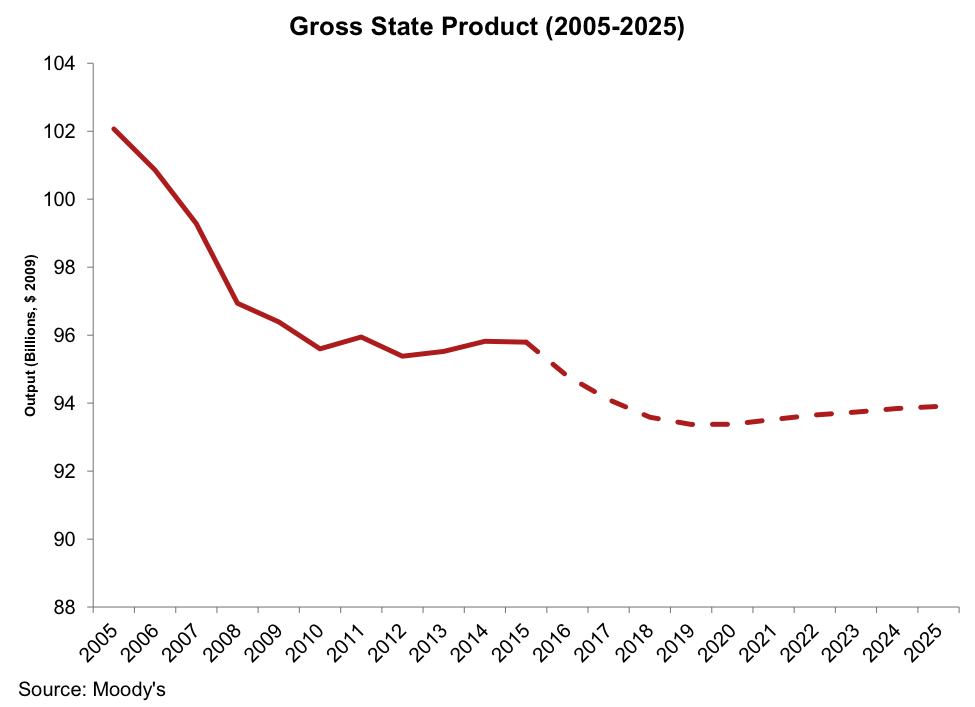 Puerto Rico has seen real output plummet since 2005, while Moody’s predicts essentially stagnant territorial income for the next decade. This growth assumption incorporates an expectation of the inability of the Commonwealth to strike the proper balance between fiscal consolidation and economic growth. Pure austerity – poorly targeted tax increases and indiscriminate cessation of services – would have anti-growth effects and could contribute to tepid growth in the future, while more innovative fiscal consolidation approaches could be buttressed by enhanced revenues from stronger growth. 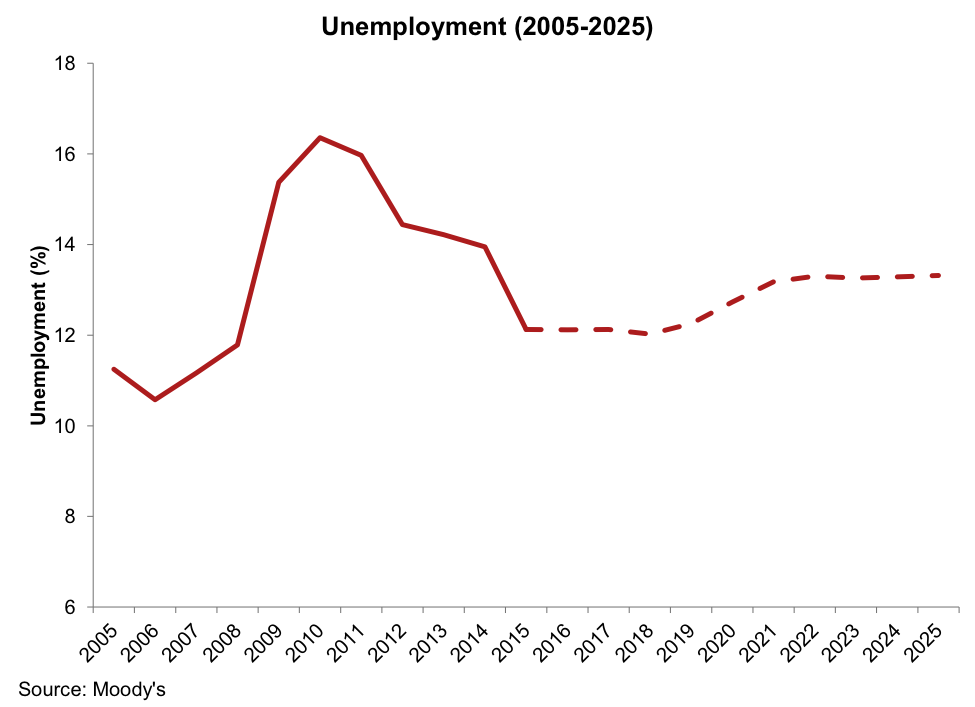 Unemployment peaked in 2010, with an increase of nearly 50 percent from 2005. While this high rate of joblessness has attenuated, it is projected to remain at persistently high levels – averaging nearly 13 percent over the next 10 years. 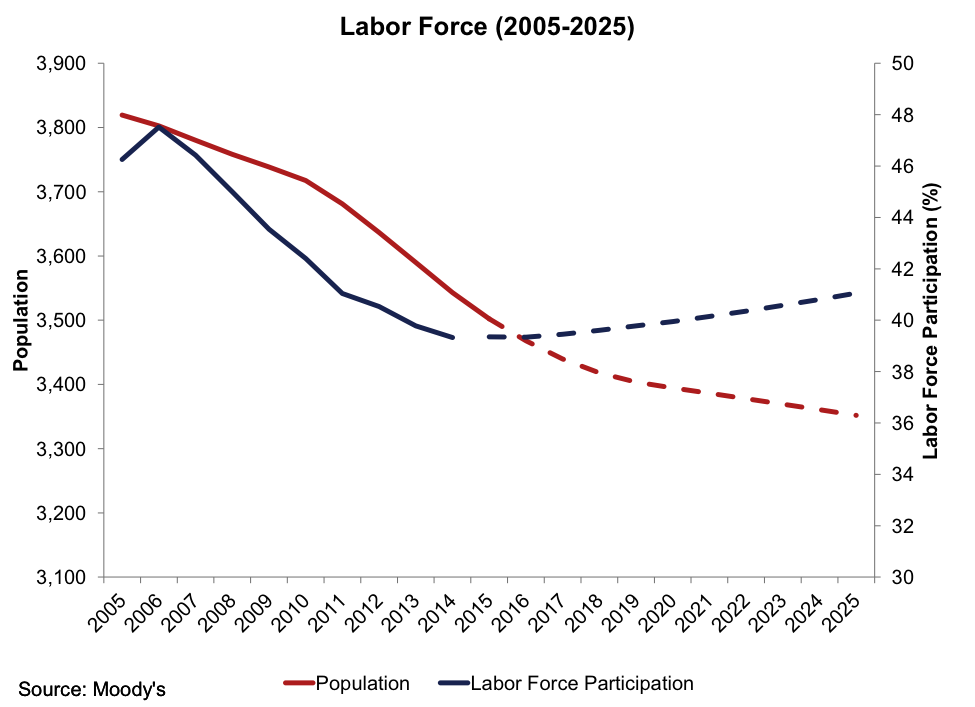 A key contributor to Puerto Rico’s economic challenge has been net emigration. Over 300,000 Puerto Ricans have left since 2005, with net emigration and population decline expected to persist for the next decade, albeit at a slower pace. This has significantly curtailed the Commonwealth’s labor force as a whole. Despite a declining population, the labor force participation rate has declined apace, highlighting structural weakness in labor markets beyond net emigration. 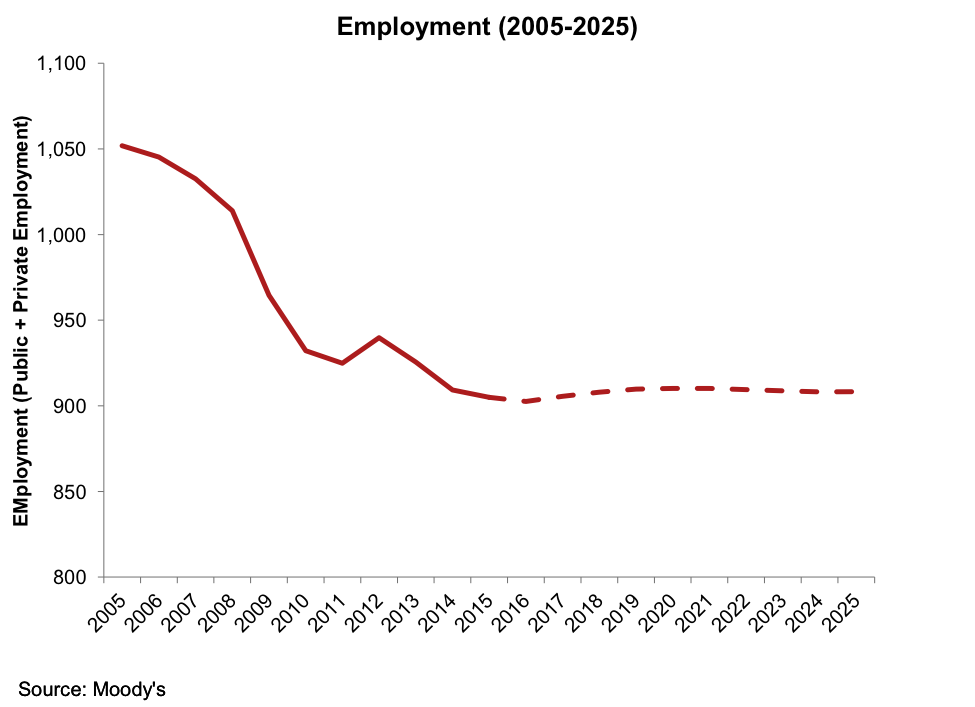 Echoing other indicators of the labor markets, payrolls have declined precipitously in the past ten years, while a policy-agnostic outlook assumes flat employment levels over time. Stable payrolls however, compared to recent experience, are a positive sign and could provide policymakers with a predictable wage and tax base in the contemplation of future fiscal policies. 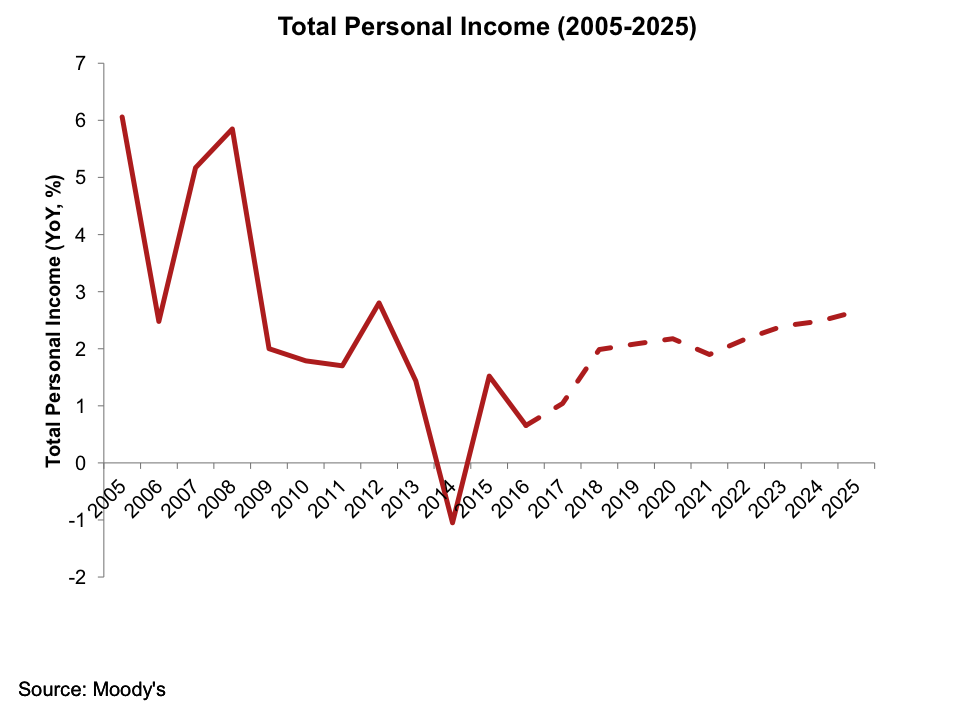 Personal Income growth has remained under 3 percent since 2008 and is projected to average about 2 percent over the next 10 years. While far from ideal, stable income growth paired with steady payrolls could again provide a predictable wage and tax base around which to design pro-growth, fiscal consolidation.

Every major economic indicator of Puerto Rico’s economic wellbeing shows a Commonwealth in a protracted retrenchment.  However, there are indications that major emigration flows and steep economic declines may have passed, leaving a trajectory of tepid though predictable growth. How Puerto Rico addresses its fiscal challenges, however, could radically alter this outlook for good or for ill.

By any objective measure, the budget outlook for Puerto Rico is troubling. The Commonwealth, through policy choices compounded by economic difficulty, has seen its debt obligations grow inexorably over the past decade and is projected to continue.  Addressing these dual challenges is essential to an improved budgetary trajectory. This necessity must also reconcile immediate concerns over liquidity with the need for longer-term structural reforms.

Puerto Rico has maintained structural deficits for some time, driven by economic conditions, policy choices, and unrealistic revenue and expenditure estimates.[1] Accounting for timing shifts and non-recurring budget events, structural deficits have been and will remain considerable.

The analysis by the Center for a New Economy of Puerto Rico’s finances is instructive here.[2] 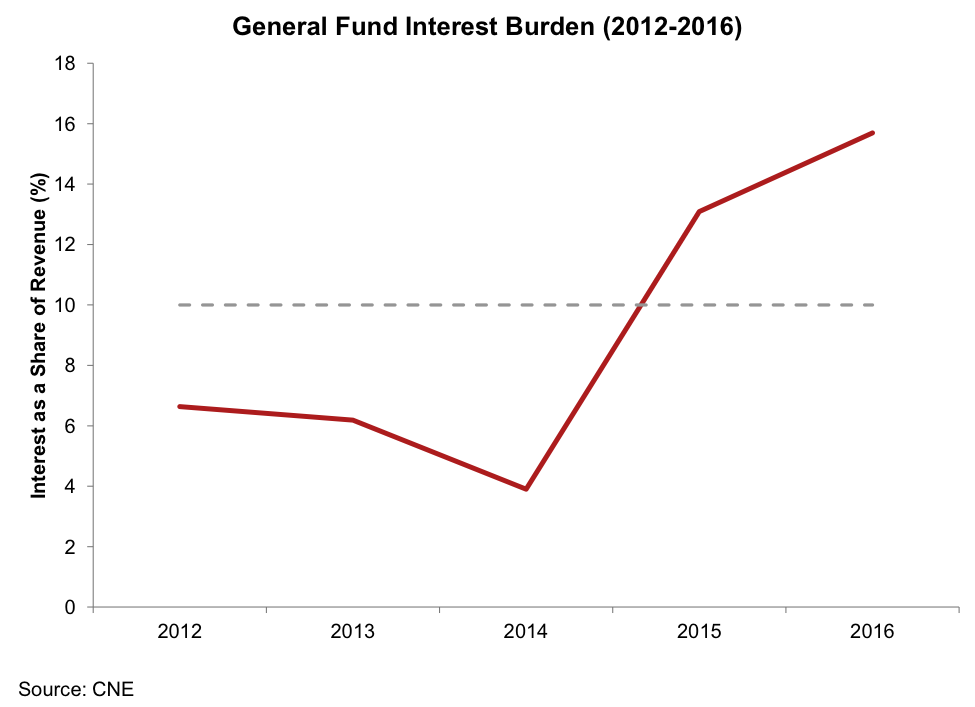 With persistent borrowing, debt service has grown as a share of general fund expenditures. More indicative of a borrower’s ability to repay debt however, is debt service as a share of revenues. This simple metric incorporates many elements that signal a borrower’s wherewithal to manage debt: interest reflects not only past borrowing, but the terms and credit worthiness of the borrower demonstrated by the interest rate underlying debt service costs; revenue reflects the strength of the economy and the ability of a government to harness national resources through tax policy. A common bright-line for identifying distressed sovereign borrowers is when interest exceeds 10 percent of revenues. The Commonwealth reached this level as of March 2015. 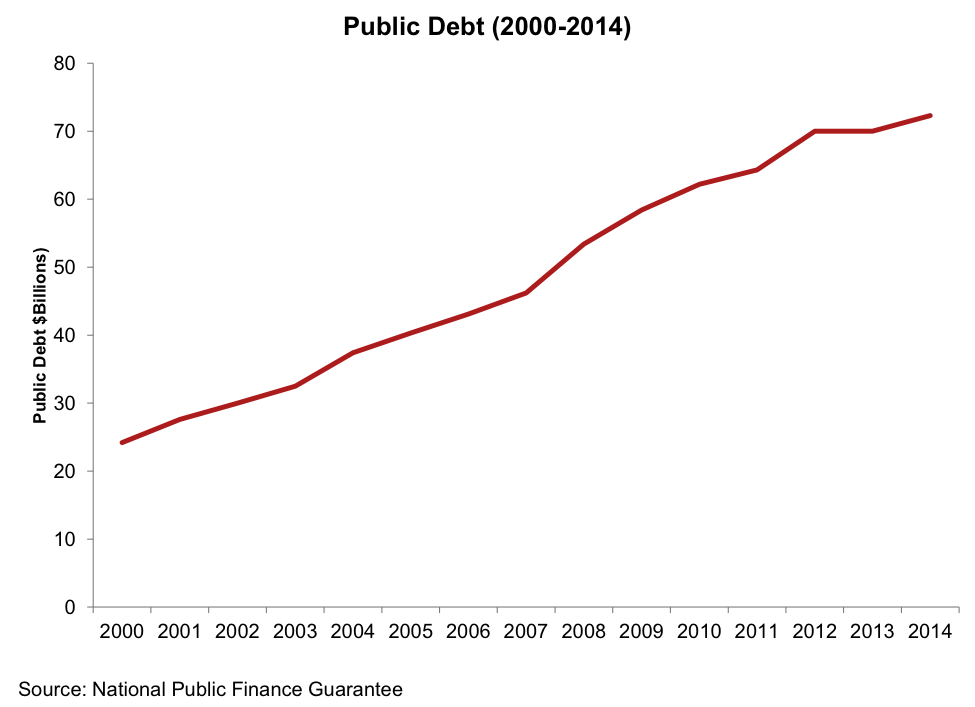 General fund debt has risen rapidly, but is only part of the problem. Puerto Rico’s debt portfolio is largely driven by entities other than the central government. The Commonwealth’s public sector debt has more than tripled over the last 15 years, rising to over $72 billion today.[3] The composition of this debt however, is instructive, and reveals the complicated nature of financing the Commonwealth’s expenditures.

As of June 2015, the public sector debt for Puerto Rico stood at $71.1 billion. Over $48 billion of this total is attributed to debt issued by Puerto Rico’s public corporations[5]. 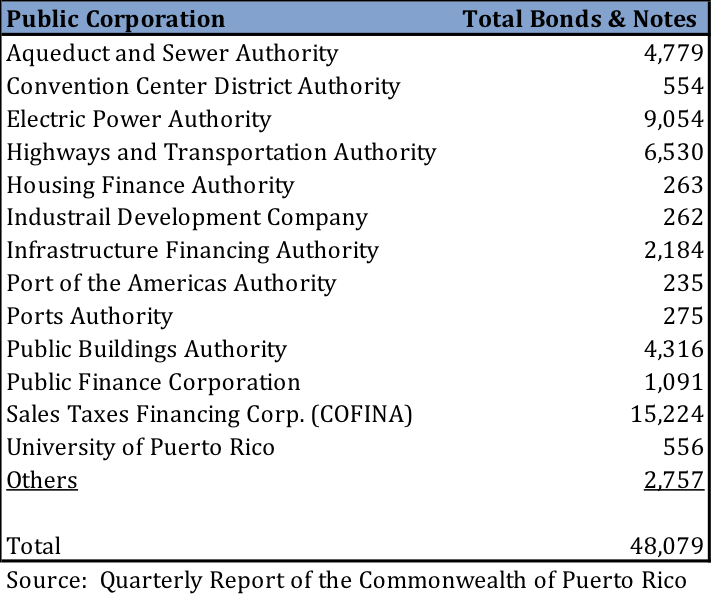 These entities provide public and business-like services to Commonwealth residents, with the bulk of the indebtedness comprised of debt of the Sales Tax Financing Corp (COFINA), which in itself was originally created to finances existing debts; the Island’s power utility (PREPA), which has recently agreed to a restructuring of some of its mature obligations; the Highway and Transportation Authority (PRHTA); the Aqueduct and Sewer Authority (PRASA); and the Public Buildings Authority (PBA). The major ratings agencies have continuously downgraded the general obligations of the Commonwealth as well as issuances of Puerto Rico’s principal public corporations, which are rated below investment grade by Fitch, Moody’s and S&P.[6]

Near Term Challenges and Outlook

Prospectively, the Commonwealth faces significant challenges in both the near and long term. Of most immediate concern is the claim that Puerto Rico is facing a liquidity crisis, and will be unable to meet its payment obligations beginning in November of this year.[7] The financial advisor to the Government Development Bank for Puerto Rico estimates that this cash constraint will persist through December before improving until June.  At that point Puerto Rico is again expected to face a liquidity challenge. It is important to note that this advisor also expects that the Commonwealth will be able to manage the immediate challenge. Moreover, the June challenge does not appear insurmountable, as the cash flow analysis that underpins the June shortfall assumes certain payments that should not take priority over existing obligations such as deferred tax refunds and “economic development fund” expenditures.

As noted above, the GDP outlook is poor, with growth remaining depressed over the foreseeable future. The Commonwealth’s future financing gap is also a source of serious concern. 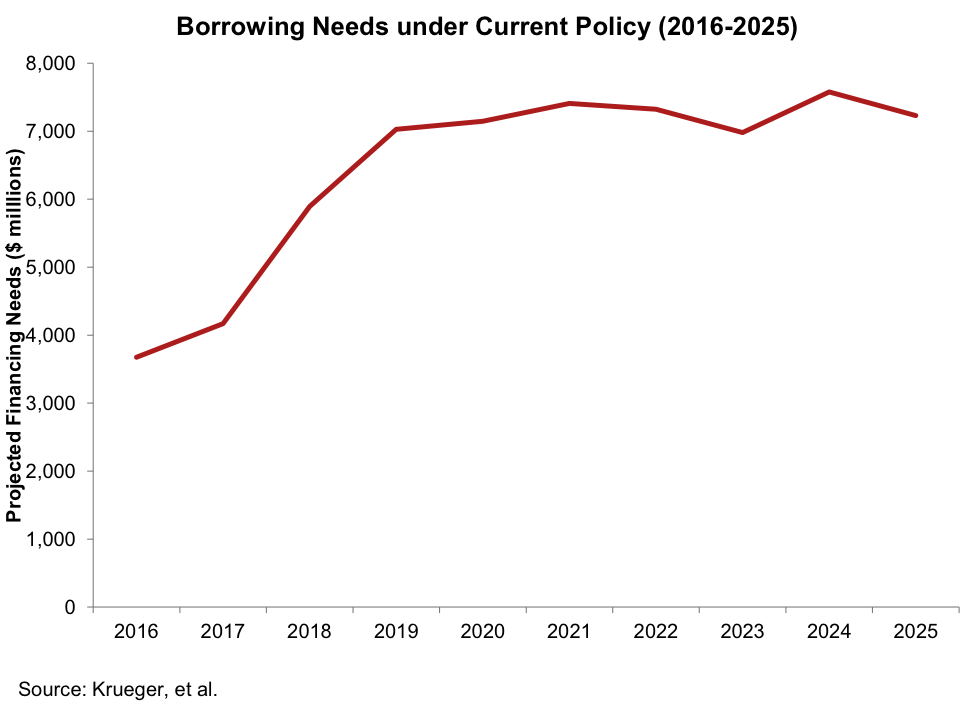 According to a recent estimate by former first deputy managing director of the International Monetary Fund, Anne Krueger and others, under current policy and accounting for other factors, the Commonwealth faces a financing gap of over $64 billion over the next 10 years.[8] Under current conditions, capital markets are highly unlikely to supply this financing to the Commonwealth. Accordingly, long-lasting and meaningful policies must be pursued to confront the duel challenge of tepid growth and an unsustainable fiscal outlook.

At the same time, the Commonwealth should undertake reforms of its labor market to bring employment practices into closer alignment with the rest of the United States. Some degree of these approaches was recognized in the “Fiscal and Economic Growth Plan,” but reforms should go farther than the plan pursues.[9] For example, the Governor’s plan would seek to exempt Puerto Rico from future minimum wage increases rather than reduce the current wage and would maintain, albeit with eased exemption, mandatory December bonuses.

Additional reforms should be pursued to reduce regulatory impediments and other burdens on business. These efforts should include addressing concerns for shipping costs by reforming the application of the Jones Act to Puerto Rico. While the Government Accountability Office did not make a conclusive determination of what overall effect this might have, limited exemptions, such as for natural gas, could be beneficial.[10]

Beyond these measures, Puerto Rican policy makers should address reforms at root causes, rather than defer these challenges. This includes measures to enhance economic growth, as well as the key drivers of the Commonwealth’s budget challenges. This should include structural reforms aimed at Puerto Rico’s major public sector corporations, as well as pensions. Some of the reforms to the public-sector corporations pursued in the “Fiscal and Economic Growth Plan,” such as depoliticizing PREPA, are worthwhile but insufficient. In the cases of some of these large public-sector corporations, PREPA in particular, a privatization should be considered, both from the standpoint of the Commonwealth’s balance sheet, as well as efficient delivery of services. Addressing unneeded municipal expense should form part of a budget plan. In some municipalities, 98 percent of budgets are payrolls, which suggests that these entities could be consolidated without diminishing services.[11] Puerto Rico has undertaken important pension reforms in the past several years, but with public pension liabilities of $43.5 billion, this area of Commonwealth finance must also be further reformed.[12] While additional tax collection should be part of the Commonwealth’s budget reforms, it should not reflect the bulk of the solution, which must be found among the key drivers of Puerto Rico’s debt.

I am less optimistic regarding the appointment of a control board with the authority to institute meaningful budget reforms. Control boards were involved in addressing budget challenges in New York and Washington DC. Unfortunately, it is hard to imagine a board that simultaneously respects the sovereignty of the Commonwealth and has sufficient political independence to be successful.  For example, the board proposed in the “Fiscal and Economic Growth Plan,” would be relatively limited in its scope and authority.

Moreover, it could hinder future wellbeing in the Commonwealth. First, while Puerto Rico will face challenges seeking financing in capital markets, Chapter 9 would enshrine these challenges with perpetually higher borrowing costs at such time that Puerto Rico is even able to access external financing. Chapter 9 would not address the root causes of Puerto Rico’s ills, but rather defer them to future generations.

The economic and budgetary outlook for Puerto Rico is dimmed by past experience. If meaningful policy reforms are not put in place to address the persistently low growth, outmigration and high unemployment, then the budgetary outlook will remain distressed. As a complement, if the major institutions and elements of Puerto Rico’s debt growth are left unreformed, then the economic outlook will be further damaged by a debt crisis and resulting diminished investment. Both facets of Puerto Rico’s challenge must be addressed simultaneously, an effort that would dramatically improve the Commonwealth’s future.

[4] This reflects most of what comprises the Commonwealth’s debt. For specific exclusions, see footnotes 1& 2 on page 63 of: http://www.bgfpr.com/documents/CommonwealthQR-5-7-15.pdf