Due to an executive order from President Trump earlier this month that declared Christmas Eve a federal holiday, last week was even shorter the typical holiday week. With only three days to work with, agencies still published some notable rules. Most of them, however, were outside the realm of the regulatory budget accounting. Across all rulemakings, agencies published $1.1 billion in total net costs and added 1.9 million hours of annual paperwork.

The most notable rulemakings of the week did not contribute to the fiscal year (FY) 2021 regulatory budget. The first did not because it comes from an independent agency, while the other claimed a national security exemption. The former was the Security and Exchanges Commission’s (SEC) rule regarding “Use of Derivatives by Registered Investment Companies and Business Development Companies.” SEC estimates that the paperwork burdens from the rule’s new requirements would require nearly 550,000 hours per year, amounting to $245.8 million in annual costs. The latter rule, coming from the Department of Defense (DOD), establishes a “National Industrial Security Program Operating Manual (NISPOM).” DOD estimates that complying with the new NISPOM protocol could cost affected entities roughly $150 million.

On December 23, the EPA published its final rule “Increasing Consistency and Transparency in Considering Benefits and Costs in the Clean Air Act Rulemaking Process.” The rule is essentially the same as the proposed version published earlier this year.

The rule has three main elements. The first codifies that for all future significant CAA rules, EPA will prepare a benefit-cost analysis at both the proposed and final rule stage. The second element outlines the key components and scientific data standards to be used in the development of cost estimates. It stipulates that these should be performed in accordance with sound scientific and economic principles.

The third element is the most important of the rule. It stipulates that benefit-cost analyses should, to the extent supported by quality science and economics, quantify all benefits, monetize all benefits, and qualify those benefits that cannot be quantified. This element also specifies that while co-benefits should be quantified when possible, co-benefits should not form the principal basis for justifying a rule. Co-benefits have been used in the past to justify expensive regulations that would not have been net-beneficial if only considering the impact of the rule on the targeted pollutant.

This third element would help prevent those instances from happening in the future, but the outlook for the final rule is uncertain. It will most likely be challenged in court. But even while litigation plays out, the incoming Biden Administration will likely start working to undo the rule. In addition, depending on how the ultimate makeup of the Senate plays out in early January, the rule could be a target of a Congressional Review Act disapproval resolution. If repealed in this manner, it would prevent EPA from issuing a “substantially similar” rule ever again.

Since January 1, the federal government has published $35 billion in total net costs (with $14.5 billion from finalized rules) and 354.7 million hours of net annual paperwork burden increases (with 288.5 million hours due to final rules). Click here for the latest Reg Rodeo findings. 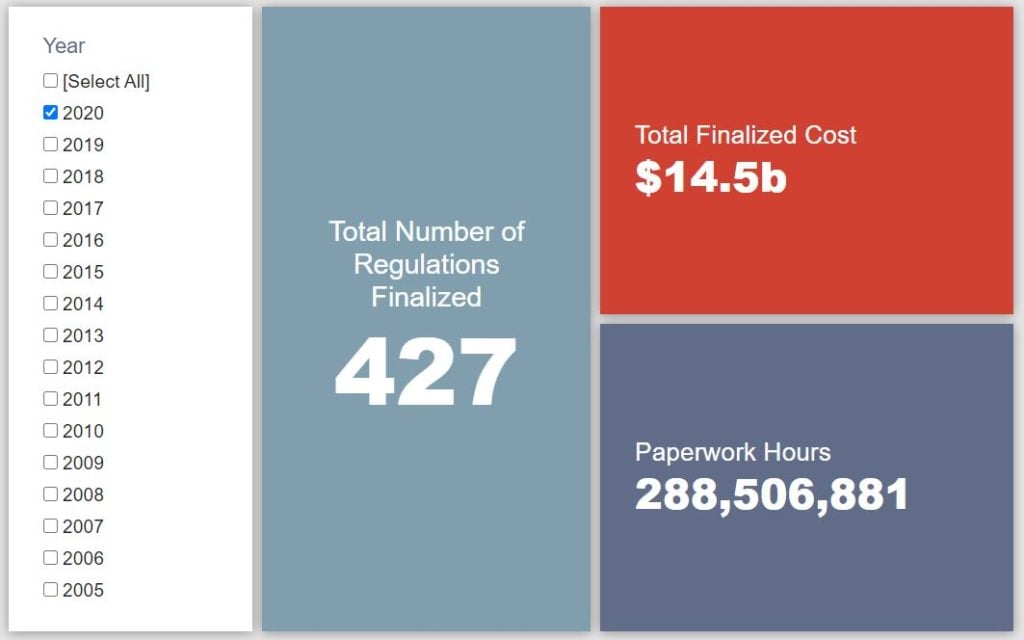