It’s been a busy week in health care policy, as congressional leaders inch toward a COVID-19 relief package and key lawmakers announced a deal to end surprise medical bills (read my analysis of that agreement here). Less noticed this week, California Attorney General—and President-elect Biden’s nominee to lead the Department of Health and Human Services (HHS)—Xavier Becerra led a letter to HHS calling on Secretary Azar to enforce provisions of the 340B Drug Pricing Program he maintains pharmaceutical companies are violating. The letter is significant because it signals that the man who could take over HHS in a few months is gearing up to expand the bloated and abused 340B program.

Recall that the 340B Drug Discount program was established in 1992 as part of the Public Health Service Act, because previous government action had negative, unintended, downstream effects on voluntary charitable price breaks that pharmaceutical companies offered to certain safety-net health care facilities. In short, pharmaceutical companies had stopped offering free or cheap drugs as a charity, and so the obvious solution to market distortions caused by government action was…more government action. This “fix” has worked out about how you would expect.

Over time the program has exploded as more and more providers seek to gain access to cheap drugs through the program. The American Action Forum’s Tara O’Neill Hayes has previously detailed the program’s evolution and problems, writing that the program “suffers from a lack of much-needed oversight” and that “patients are too often not benefitting from the mandatory discounts provided under the program.” And as Hayes (among many others) has pointed out, post-Affordable Care Act the percentage of uncompensated care has decreased, making the entire basis for the program less relevant. But even as uncompensated care has decreased, the program has continued to grow. The 340B program grew by an estimated 170 percent between 2014 and 2018, such that in 2018 14 percent of all branded outpatient drug purchases were made through the program. In 2019 alone, 340B purchases accounted for $30 billion.

The issue at the heart of the Becerra letter is the expanded use of contract pharmacies within the program. Pharmacies are not mentioned in the 340B statute, but in 1996 the Health Resources and Services Administration (HRSA) issued guidance allowing 340B-eligible entities to contract with a pharmacy if they did not have one as part of their facility. In 2010, HRSA expanded the allowance such that all eligible entities can now contract with any number of pharmacies.

Manufacturers argue that this has led to abuses of the program. For example, pharmacies do not know a patient’s status as a 340B-eligible patient when picking up a medication, so the pharmacy may not pass the discount on to the patient—and is not required to even if it were aware of the patient’s status. Additionally, because of a lack of information and oversight, these 340B drugs can be diverted to patients who are not eligible for the 340B price, causing greater revenue loss to manufacturers. The pharmacies can also double dip, receiving both the 340B discount as well as the “best price” rebate required by Medicaid. One recent study estimated that 340B entities and their contract pharmacies made $13 billion in profits through the 340B program in 2018 alone.

In response, some manufacturers have asked 340B contract pharmacies to provide data on 340B drugs to ensure the drugs are not being diverted to ineligible patients and that the double dipping described above is not occurring. Until they receive the data, they have restricted how many contract pharmacies they will ship a 340B entity’s discounted drugs to. It is this restriction that Becerra and others are objecting to, arguing it violates HRSA’s 2010 guidance.

The reality is the 340B program has been turned into a cash cow for eligible entities and their contracted pharmacy partners, a result completely at odds with the original intent of the program. These entities and their political allies are committed to keeping the gravy train running regardless of whether it benefits patients. It’s long past time to reform the 340B program to ensure that it benefits the patients it was intended to help—and that others don’t take advantage. The Becerra letter indicates the Biden Administration won’t be interested in that fight, unfortunately.

Chart Review: What Is a Surprise Medical Bill?

Members of Congress have been debating how to address surprise medical bills for years, and before the pandemic many thought that 2020 would be the year Congress finally acts. While the public health crisis made surprise billing a lower priority, it appears that key legislative leaders have finally reached a compromise, as AAF’s Christopher Holt outlined earlier this week. But what exactly is a surprise medical bill? The infographic below answers this question. 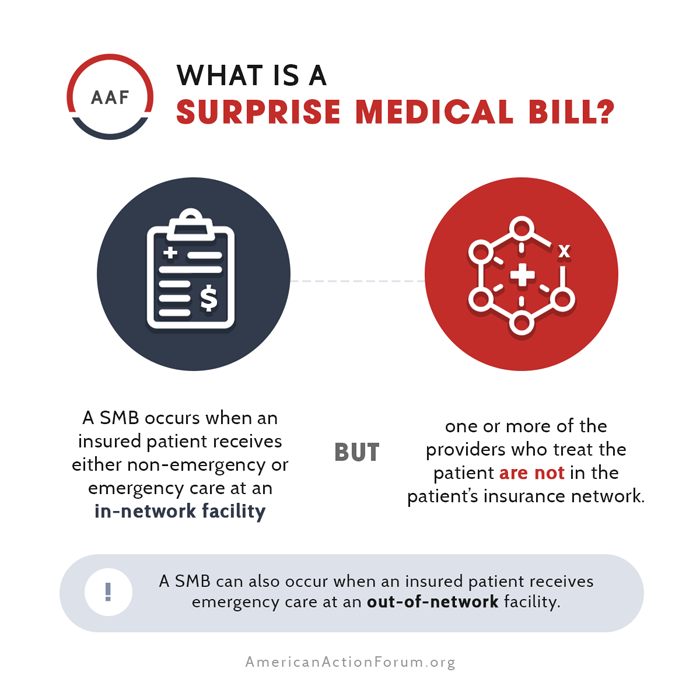 Economic Headwinds and a Public Option – Director of Fiscal Policy Gordon Gray and Director of Health Care Policy Christopher Holt
All of the options for financing the most likely structure for a public option would damage the economy, but some would do so more than others.

Daily Dish: Balancing Growth Versus Other Agendas – The Public Option Example – AAF President Douglas Holtz-Eakin
The Biden Administration will have to balance economic growth with other policy priorities, as new research on the public option shows.

The Deal to End Surprise Medical Bills: Federal Policymakers Finally Get to Yes – Christopher Holt
The No Surprises Act addresses the most crucial objective of lawmakers: protecting patients from unexpected, out-of-network medical bills.