The last 30 days were tough for Aduhelm, the first Alzheimer’s drug using monoclonal antibodies to target amyloid beta plaques that are theorized to be important drivers of Alzheimer’s in the early stages. Aduhelm was approved last year by the Food and Drug Administration (FDA) through its accelerated approval pathway and was the first new Alzheimer’s drug to be approved by the FDA in almost two decades. In early April, the Centers for Medicare and Medicaid Services (CMS) finalized its decision to cover Aduhelm only for patients in clinical trials. As part of its reasoning, CMS stated that Aduhelm’s weak efficacy data meant the drug didn’t meet the “reasonable and necessary” standard for full Medicare coverage. Giving Aduhelm’s manufacturer Biogen a bit of hope, CMS said it would provide broad coverage if ongoing and future clinical trials show a benefit and minimal negative side effects.

UnitedHealthcare adopted a similar policy to CMS’s at the start of May and will only cover the drug for patients in clinical trials. This isn’t unusual; insurers often look to CMS when making coverage decisions. While insurers may not cover everything CMS approves, they are unlikely to cover anything CMS does not.. As a result of CMS’s decision to cover Aduhelm only in clinical trials—and UnitedHealthcare’s similar decision—Biogen’s CEO is stepping down and the company will be suspending almost all support to Aduhelm beyond ongoing clinical trials and patient access programs.

This saga raises some important questions, namely: What are the implications of CMS declining to cover an FDA-approved drug? One 2018 study showed that 90 percent of novel therapeutics were covered by Medicare Part D plans one year after approval and 97 percent were covered three years after approval. As for Part B drugs, of which Aduhelm is one, a 2013 study found that 80 percent of drugs and medical devices approved by the FDA were covered by Part B. So, the Aduhelm decision isn’t the only time CMS has declined broad Medicare coverage for an FDA-approved drug. This decision has broader implications, however. Since the start of the pandemic, the FDA has experienced historic lows in public trust, and it seems CMS is second-guessing the FDA, as well. The Aduhelm decision by CMS follows a slew of problems experienced by an FDA that is starting to show some cracks after a rough pandemic.

But the Aduhelm story is more complicated than that of most FDA-approved drugs. First, as noted earlier, this is basically the only new treatment for Alzheimer’s in almost 20 years. Patients and families looking for treatment are understandably desperate for anything that might help blunt the devastating effects of Alzheimer’s. But Aduhelm’s original efficacy data raised eyebrows about how this drug got approved. The drug is also quite expensive. Initially priced at $56,000, Biogen has since slashed that to $28,200 in the face of low demand. CMS isn’t supposed to factor price into decisions, but the agency initially had to bump up Medicare Part B premiums by 14.5 percent for 2022 in large part because of the high costs it expected to cover Aduhelm. The Kaiser Family Foundation predicted that Part B coverage would lead to $30 billion in increased spending by Medicare – on a drug with limited proof of efficacy.

Putting aside the functional issues with Aduhelm and the FDA, the CMS decision sets a concerning precedent. Should CMS be able to deny its beneficiaries access to drugs that were explicitly made for an elderly population? How much influence does that ultimately give CMS over the drug market? Will CMS start using this leverage to force back-door negotiations with drugmakers? CMS claims cost didn’t factor into its decision, but it is difficult to believe cost wasn’t at least a small factor – especially after CMS bumped premiums up initially, implying that CMS expected it would cover the drug. CMS knows its coverage decisions heavily influence those of private insurers. This decision could be seen by CMS as another way to put its thumb on the scale. A more punitive administration that disapproves of a drugmaker’s politics could begin to deny coverage with flimsier pretexts. Some researchers, Alzheimer’s experts, and even members of the FDA’s own advisory committee think the FDA erred in its decision to approve Aduhelm, but it’s not clear just what objective measures should prompt CMS to refuse payment for an approved treatment. Future FDA-approved drugs, whose manufacturers are seeking CMS coverage, may have more muddied results than Aduhelm did, and the potential implications of politics bleeding into coverage decisions should give us all pause.

In response to the COVID-19 pandemic, the American Rescue Plan Act increased the generosity of the Affordable Care Act’s (ACA) premium tax credits (PTCs) and lifted the income cap on eligibility for 2021 and 2022. As Democrats failed to extend these enhancements via the Build Back Better Act, PTC generosity and eligibility will return to pre-pandemic levels in 2023. Christopher Holt and I recently calculated the impacts, and our findings are summarized in the chart below. 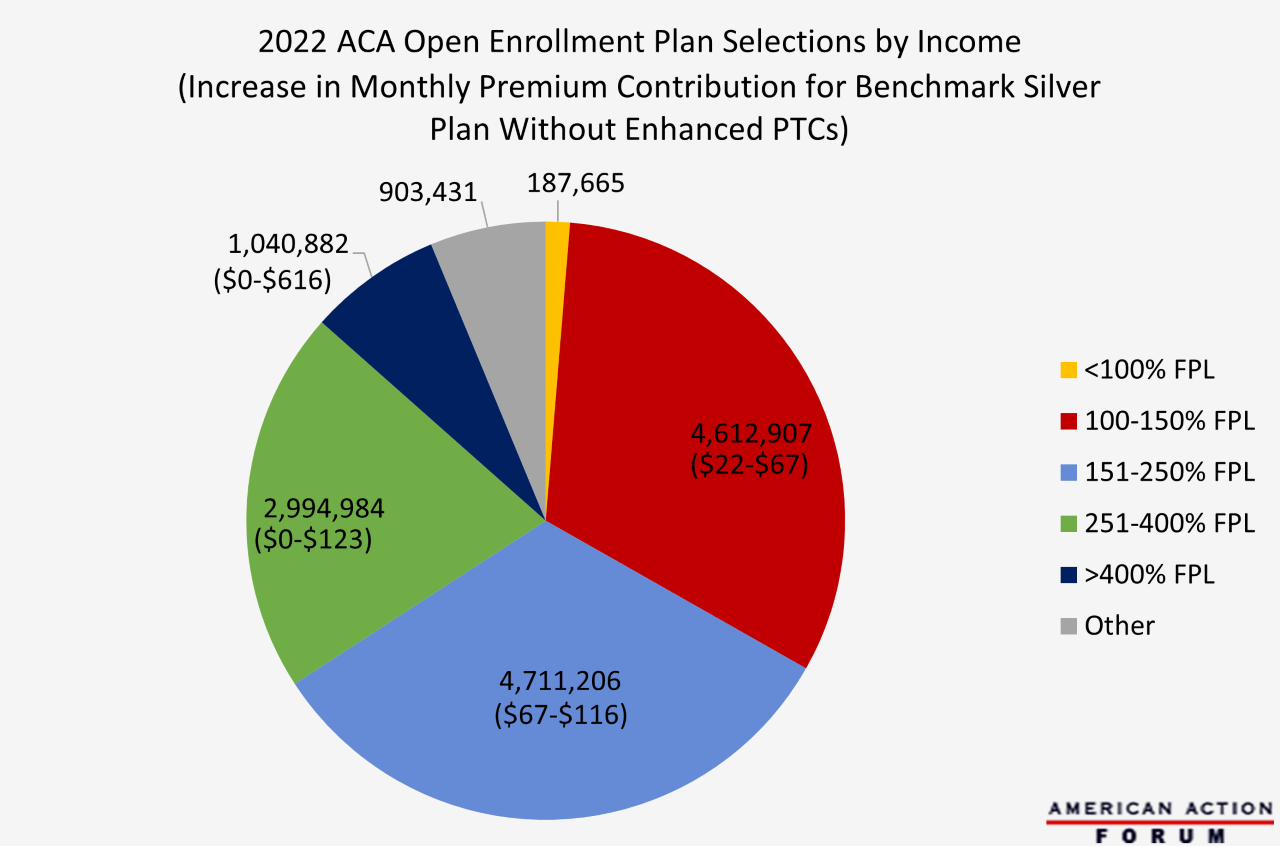 Build Back Better is dead and whatever arises from its grave isn’t going to involve health care. Prescription drug price setting – excuse me, “negotiation”…